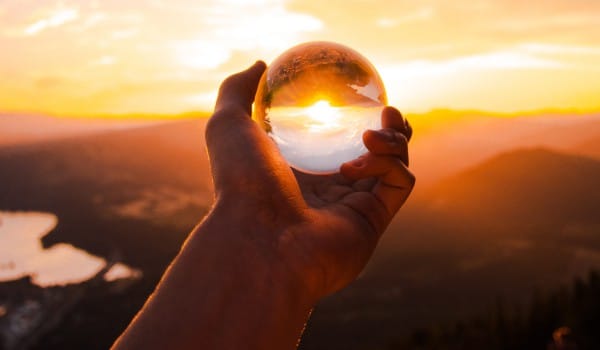 I spend disproportionate amounts of time thinking about other people’s potential. In fact, I think so much about other people’s careers and happiness that it’s a miracle I’ve gotten mine somewhat in line at all. Or, maybe, it’s exactly because of it that I did. I don’t know.

I just can’t help it. It’s like I was put here to figure out what people were meant to do and then point the way up the right hill. I’m wrong a lot, of course. It’s not always a healthy habit. But still… For some reason, I’m able to tap into people’s psyche well enough to conjure recommendations that feel like they’re worth sharing. Like I can’t not share them.

I realize this is a lousy job. 99% of the time, what I say will fall on deaf ears. Worse, I get rolling eyes, polite but skeptic nods, and a great deal of folks thinking I’m a lunatic, entitled, or just plain annoying. But those 1%? The 1% who dare try another approach or consider listening to their heart? Worth every second. That’s a weird bit of math, but it works for me.

Wanna know why? Here’s a secret: It doesn’t matter what I tell them nor if they take my advice. What matters is that the conversation gives them the courage to stop giving a damn what people think. To say, “Screw it, I’m gonna do what feels right for me for once.” Without that, no subsequent potential-fulfilling can happen. That’s the first step I need you to take. We all need you to take. Maybe, it’s the only one.

In the first episode of the hit show Billions, the main billionaire in question, Bobby Axelrod, considers buying a house so expensive it’d make him look bad in public. When an adversary tells him not to, he replies:

What’s the point of having ‘fuck you’ money if you never say ‘fuck you?’

There’s something funny in there about billionaires rarely using this power they’ve so arduously acquired. What’s even funnier is a related line from a movie also dealing with this topic.

In The Gambler, Jim Bennett must take a huge risk just to get off scot-free. After he does and wins, he leaves the building and starts walking. One of his former creditors pulls up in a car and offers him a ride, which he declines.

What do you got on you?

Not a fucking cent.

That’s not a “fuck you” position.

When the loan shark offers him yet another sounds-too-good-to-be-true kind of deal, Jim finally does it. He says “fuck you” and just runs away.

See? That’s the thing. You can say “fuck you” right now. You might not have to say it to a person and you definitely don’t have to be rude in how you deliver the message. But if you don’t start drawing boundaries now, where is real power to say no to what you don’t want ever supposed to come from?

Your attitude is as important to fulfilling your potential as is having the right resources. If you don’t have much of the latter, start with the former.

I’m not suggesting this is an overnight process. Nothing is. It’ll be a slow, steady grind of taking back your freedom, your agency, your power to choose over the years. But it takes just one day, one sentence, one tiny decision to start.

You know who has a lot of actual “fuck you” money? Jim Carrey. The man made hundreds of millions of dollars, and yet, it still took him years to arrive at a place where he can openly, comfortably, unapologetically be himself — no matter how crazy it looks to the outside world.

In Jim & Andy, a documentary about his over-the-top portrayal of his idol Andy Kaufman, Jim says:

At some point you have to live your true man. Truman Show really became a prophecy for me. It is constantly reaffirming itself as a real representation of what I’ve gone through in my career — what everybody goes through when they create themselves to be popular or to be successful.

And it’s not just show business, it’s Wall Street, it’s anywhere. You go to the office, you put a monkey suit on, you act a certain way and you say a certain thing, you lie through your teeth at times and you do whatever you need to do to look like a winner.

And at some point in your life you have to go, “I don’t care what it looks like. I found the hole in the psyche and I’m going through. And I’m gonna face the abyss of not knowing whether that’s gonna be okay with everybody or not.””

That’s what I want for you. Just once. Try it on for size. Say, “I don’t care what it looks like.” Maybe, you’ll do it again. And again. And again. Until you see, “Oh, actually, I’m okay. I don’t need anything else. I can do this. I’m complete the way I am. Even if I choose to be myself, the world will keep on turning.

Billionaires, gamblers, movie stars, they all take a long trip around the block to learn the same lesson:

Living authentically starts with not being driven by people’s opinions.

Maybe, you’ll have to take a long journey to get there. Many people do. But whether you catch the shortcut or not, don’t wait until the last stop to get off the opinion bus. And there is a last stop. Jim knows:

We yearn for what happens at death.

He sighs with relief.

I don’t have to worry about that anymore?

Once it’s inevitable, for many, death becomes a moment of utter peace and acceptance. Well, call me crazy, but I think it’s ridiculous to wait until you die to get that. Start working on it now. You’re going to die anyway. What have you got to lose trying to find peace sooner?

Take it from another, real-life billionaire who took a long time to realize this:

Remembering that you are going to die is the best way I know to avoid the trap of thinking you have something to lose. You are already naked. There is no reason not to follow your heart.” — Steve Jobs

I love what I do. I hope I’ll be here for a long-time, trying to shake you, wake you up one line of words at a time. But in the end, it’s up to you. Only you can take the first step. Jim, Steve, Bobby, me, we’re just messengers. Agents sent from somewhere far away, but all with the same, universal, timeless message:

Your time is limited, so don’t waste it living someone else’s life. Don’t be trapped by dogma — which is living with the results of other people’s thinking. Don’t let the noise of others’ opinions drown out your own inner voice. And most important, have the courage to follow your heart and intuition. They somehow already know what you truly want to become. Everything else is secondary.