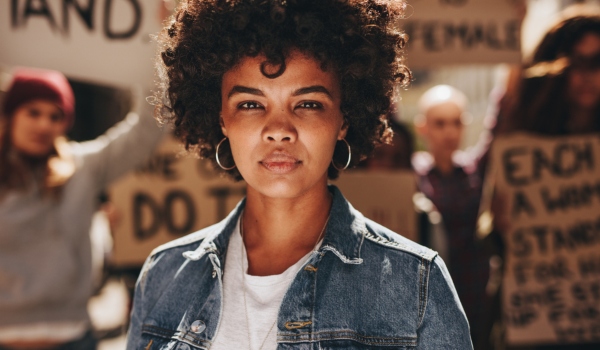 All contributions to debates about a feminist future need a good dose of herstory. No one person or one group speaks for feminism in its entirety. That reality was not reflected earlier this month in the Globe and Mail’s choice of Maureen McTeer and her daughter, Catherine Clark, both white upper-middle-class women of a certain background, to answer the question “Is the Work of Feminism Finished?”  The reprimand found in Septembre Anderson’s “Today’s feminist problem? Black women are still invisible,” to any such stunted version of feminism provided a salutary reminder of diverse, even conflicting, outlooks, even as it made white women rather than patriarchal and capitalist structures the enemy. The potential for a more nuanced response came from the far more diverse group featured in “How We Succeed.” None of this is new. In fact feminism has always been multivocal and diverse. This has been both its weakness and its strength. Individuals and groups commonly seize particular causes that touch their own lives most directly.

Canadian feminists have wrestled with how to speak with many voices since the 19th century. In 1893 the National Council of Women of Canada (NCWC)/Le Conseil National des Femmes du Canada, a member of the International Council of Women, set out to frame a common platform. In Quebec, the Fédération National St.-Jean-Baptiste attempted a similar initiative from 1907 onward, even as it was hobbled by the Roman Catholic Church. Nor was the search for a broad program entirely new even then. Beginning in the 1870s the Woman’s Christian Temperance Union (WCTU) had committed members to ‘doing everything’. This meant far more than prohibition. The goal was a global alliance to end violence against women and children and secure the vote.

Feminism’s recurring reminder to think globally has also inspired resistance to oppression of every kind. In the suffrage campaigns, for example, many activists developed an inclusive vision of what democracy should be. In 1913, Victoria, BC’s middle-class WCTUer and suffragist, Maria Grant was not alone in insisting that “the need of political power for the working class is greater than that of any other class because only when she is able to influence industrial legislation will she cease to be exploited and forced into starvation and shame” (see also http://activehistory.ca/2016/03/film-friday-suffrage-stories-without-class/ ). The forthcoming seven-volume series from UBC Press, ‘Canadian Women, Suffrage and Human Rights’ presents this complicated story. The first overview volume begins, for instance, with 19th century Black suffragist Mary Ann Shadd Cary and closes with the campaigns of Indigenous activists.

The NCWC tried to outdo the WCTU by adopting a non-denominational and open-ended approach. All women’s groups were invited to join with the promise that none would be coerced to adopt a single point of view. Soon enough, however, middle-class and white race prejudice undercut ambitions: working-class and Indigenous women and women of colour found deliberations largely irrelevant and patronizing. The NCWC commitment to consensus also proved debilitating, as with its tardy commitment to women suffrage (1910) and the long sidestepping of contraception and abortion. Such limitations reduced the NCWC to a national forum for a limited elite rather than the ‘parliament of women’ to which it aspired. For the most part, member groups such as the Canadian Federation of Business and Professional Women (CFBPW) took the lead in feminist demands, such as employment equity.

The NCWC nevertheless survives into the 21st century, a testament to a continuing desire for greater coordination among Canadian feminists. Its membership today is reduced but it extends from veterans such as the CFBPW and the YWCA to the Canadian Council of Muslim Women and the Canadian Association of Midwives. Its recent support for progressive campaigns and excursions into social media suggests a group with a new lease on life.

Canadian feminists of the 1960s and 1970s largely dismissed the NCWC (if they had heard of it at all) as irrelevant. Deprived of the Canadian herstory, many tended to locate origins in the Royal Commission on the Status of Women (1967-70) or in the women’s caucuses associated with the student, union, and French and English-Canadian nationalist movements.

Post-1960s feminists nevertheless rediscovered the value of alliances. This meant the Fédération des femmes du Québec (FFQ; founded 1966) and the National Action Committee on the Status of Women (NAC; founded 1971). Both coalitions helped insure that the Report of the Royal Commission on the Status of Women wasn’t forgotten and that Canada’s Charter of Rights and Freedoms (1982) contained Sections 15 and 28 guaranteeing rights equally to men and women. Today the FFQ thrives. Early in the 21st century the NAC fell victim both to its failure to sustain racial partnerships and to reactionary governments.

Despite occasional gains since 1982 (for example the legalization of same-sex marriage in 2005), champions of equality and justice faced a decades’ long illiberal political tide. Regimes of every persuasion chipped away at feminist gains and refused to address, inter alia, the special injuries done Indigenous women, the need for universal childcare, or persisting gendered and racialized wage gaps. The refugee and immigrant crisis of the 21st century, so heartbreakingly captured in the 2015 death of Alan Kurdi, only confirmed conservatives’ brutal calculations.

By this time, however, years of austerity had sharpened the consciousness of most Canadians. Well before the 2015 federal election, they mobilized to question a Conservative government that embodied the neo-liberal assault on fair dealing. Feminists were ubiquitous in protests from Idle No More to Occupy, the Quebec student drive against tuition increases, the campaign for missing and murdered Indigenous women, and civil society groups such as the Canadian Labour Congress, Voices/Voix, the Native Women’s Association of Canada, West Coast Leaf, and Engage Canada. Feminism’s potential for wide-ranging interrogation of abusive systems has regularly generated backing for partnerships. In March 2016, the message broadcast in the Globe and Mail that “Canada’s leading women’s groups seek co-ordinated advocacy” was only the latest in a long line of such calls.

As they surveyed Ottawa’s Liberal victors in October 2015, Canadian feminists had once again to consider the future. On the one hand, they could celebrate the nation’s first gender-balanced cabinet, with unprecedented inclusion as well of racialized minorities, and the government’s commitment to a federal inquiry into missing and murdered Indigenous women and reversing cutbacks that had injured refugees and the environment. On the other hand, the Liberal Party’s historic tendency to campaign on the left and govern on the right tempered hope. The need for vigilance was affirmed when the Global Gender Gap Index showed Canada toppling from 14th to 30th in the ranking of the world’s nations between 2014 and 2015.

In 2016, feminists seek once again to balance the reality of diversity with the rewards of greater coordination. When division triumphs as it did with NAC, prospects for Harper and Trump look-alikes here and abroad brighten. In 2005, Judy Rebick invoked 10,000 Roses as a metaphor for Canadian feminism. The garden in which all can flourish is still required. Groups such as the Native Women’s Association of Canada, the Women’s Legal Education and Action Fund, the Canadian Congress of Black Women, the Disabled Women’s Network/Réseau d’Action des Femmes Handicapées du Canada, the Canadian Council of Muslim Women, as well as the CFBPW, the YWCA, and the NCWC can provide leadership. Canadians could also look to the Fédération des femmes du Québec. In setting up the World March of Women against Poverty and Violence in 2000, it provided a powerful model of collaboration that remains relevant.

Whatever women and groups lead in constructing today’s feminist alliances, they need to remember history’s lessons. If unity is to be mustered in the cause of a fairer world, diversity on the ground must be matched by diversity of thought and person in the top ranks.