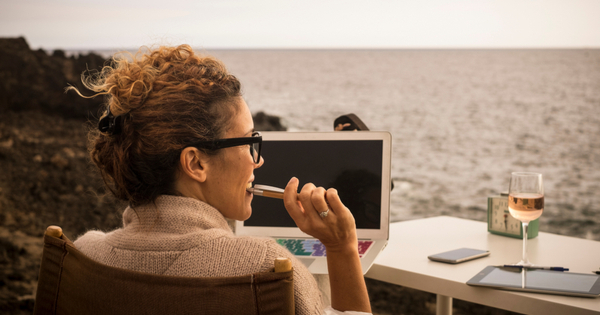 The farmer has patience and trusts the process. He just has the faith and deep understanding that through his daily efforts, the harvest will come. And then one day, almost out of nowhere, it does.

A few years ago, I re-read the book, The Monk Who Sold His Ferrari; a Spiritual Fable about Fulfilling Your Dreams and Reaching Your Destiny, by Robin S. Sharma. I have read that book about four times now. Upon each re-read, I get new insights as well as much-needed reminders on old ones. To me, that’s a good indication of a strong self-help book.

What struck me most during my recent re-read was Sharma’s comments on the importance of focusing on the process of achieving a goal—versus on the completion of that goal.

This story, from The Monk Who Sold his Ferrari, illustrates his point:

“A young boy traveled far from his home to study under a great teacher. When he met the wise old man, his first question was, ‘How long will it take me before I am as wise as you?’

‘This is a very long time,’ the boy replied. ‘How about if I work twice as hard?’

‘Then it will take ten,’ said the master.

‘Ten! That’s far too long. How about if I studied all day and well into the night, every night?’

‘I don’t understand,’ replied the boy. ‘Every time I promise to devote more energy to my goal, you tell me that it will take longer. Why?’

‘The answer is simple. With one eye fixed on the destination, there is only one left to guide you along the journey.’”

I must admit that at first, I didn’t really get this concept. Yes, I understood the message…but I didn’t really grasp the practical implications for my own work as a writer. Until, that is, I was faced with yet another significant rewrite of one of my playscripts.

Deep down, I knew I had to approach this rewrite differently if I wanted different results. And I did.

So I took Sharma’s advice and decided to focus on the process—versus pushing myself to finish the damn thing once and for all.

Here’s what I did:

#1. I limited the time I spent on the project to two hours per day.

#2. I always put in those two hours of writing first thing in the day when I am at my sharpest and most creative.

#3. I didn’t try to achieve very much in those two hours. Instead, I chose a single scene to work on…and worked at it until I got it right. Or as close to right as I could within my two hours.

#4. Then, regardless of where I was at after those two hours, I made a note to myself within the script of where to pick up the next day. Then I moved on to other tasks.

What I began to notice was that during my early morning pre-writing quiet time, I would invariably get insights for the play…small but significant tweaks, usually pertaining to whatever scene I had been working on the day before. My subconscious was working when I wasn’t.

I’ll be honest: the rewrite went painstakingly slow. It took me thirteen months to get the script where it needed to be. And that’s after fifteen years of getting the script to that rewrite!

But here’s what I finally figured out: the process of writing and rewriting that play script revealed to me who I am, what I truly believe and how I perceive the world. By slowing down the writing and allowing my characters—and therefore myself—the luxury of following an idea through to the very end, including the dead-end streets, I learned far more than if I’d set myself a firm deadline for finishing the rewrite then stuck with it, no matter what.

Despite what our fast-paced culture would indicate, there are some things that can’t be rushed. Many things, in fact. Maybe our job—our real work—is to simply show up each day and take what steps we can towards whatever it is we have set our hearts to accomplish. And in the process of doing that, we might just learn a thing or two we could never have dreamed of learning…or accomplishing.

It is only when you make the process your goal that the big dream can follow.