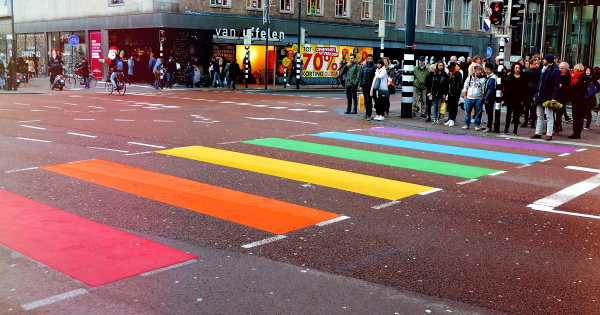 One was Friday being National Coming Out Day, a day for LGBTQ+ persons to tell whomever they please about their sexual orientation and gender identities.

A lot has happened since the first NCOD in 1988. The Supreme Court has ruled that both same-sex marriage (Obergefell v Hodges) and consensual sex between partners of the same gender (Lawrence v Texas) are constitutionally protected. LGBTQ+ characters are becoming a staple of television and movies. Transgender roles are being played by transgender actors, such as Lachlan Watson’s role on “The Chilling Adventures of Sabrina.”

In 1988, Ronald Reagan was still President. Reagan’s legacy among the LGBTQ+ community is that of a homophobe who resisted for years to properly identify the AIDS epidemic. The government’s unwillingness to deal with the crisis honestly led to delays in education and research and, as a result, many deaths that could have been prevented.

Reagan’s Vice President was George H. W. Bush, and Bush’s son George W. Bush was cut from the same cloth: As President, the younger Bush pressed for a national ban on marriage equality. George W. Bush will return in this article.

Only a few years prior, Bronski Beat had made a political statement with their debut album “The Age of Consent,” the slip jacket of which originally featured a list of sexual ages of consent for heterosexual and homosexual relationships around the world. With their song “Small Town Boy” receiving heavy rotation on MTV, openly gay culture moved mainstream.

The 1990s saw Sophie B. Hawkins’ sexually ambiguous “Damn! I Wish I Was Your Lover” and Jill Sobule’s “I Kissed a Girl” (not to be confused with Katy Perry’s later hit). Also, on the TV show “Ellen,” the titular character came out simultaneously with her namesake, Ellen DeGeneres.

The next decade saw Hollywood struggling with a closeted same-sex relationship in “Brokeback Mountain,” while this decade has seen a steady increase in transgender awareness, including the Amazon Prime show “Transparent” (unfortunately featuring a cisgender actor) and major characters in “Sabrina” and “The Good Girls.”

Acceptance of LGBTQ+ folk has come a long way in a few decades.

But there’s still more to be done. For instance, it’s still legal in most states to fire someone for being something other than cisgender and heterosexual.

Last week, SCOTUS began considering several cases involving that issue. Two men sued on the basis that their respective employers fired them for being gay. Meanwhile, Aimee Stephens claims she was fired from Harris Funeral Homes when she began presenting as a woman; she had previously identified as a man, the gender assigned to her at birth.

The basis of these cases is that discriminating against someone for their behavior or appearance based on expectations of how “men” are supposed to behave or dress is a violation of the government’s ban on gender discrimination. It is important to understand that the primary argument in these cases is not that gay and transgender people have rights specific to their LGBTQ+ status, but rather that it’s a violation of gender discrimination laws to require men or women to comport themselves in a gender-specific way.

“Men” is in scare quotes in the previous paragraph precisely because of the Stephens case: Although Aimee Stephens is a woman, her employer fired her on the basis of his belief that she is a man and therefore can be required to only wear the clothing his company assigns to men. This detail is key to the ACLU’s case.

If SCOTUS decides in favor of Zarda, Bostock, and Stephens, it would mean that the myriad LGBTQ+ folk who are currently hiding in the closet at work can do something that Ellen DeGeneres did 30 years ago: Start living authentically to themselves publicly.

Naturally, a positive SCOTUS ruling won’t completely erase bigotry. Many companies will just become more clever about hiding their illegal motivations, just as many companies continue to mistreat people who aren’t white men. But it will at least move society in the correct direction.

And to be fair to DeGeneres a moment before I criticize her: Her coming out was a major risk for her. She could have been ostracized, even from entertainment. Only a decade prior, gay entertainers like Freddie Mercury, George Michael, and Judas Priest’s Rob Halford stood in the doorway of the closet, wrestling with whether to emerge.

But it’s because of that risk, and what she ought to remember of it, that what she did last week was extremely disappointing.

With or without that protection, DeGeneres isn’t at much risk of losing her career. Unlike the majority of the LGBTQ+ community.

But okay, she can make friends with a scorpion if she wants to. I’m sure when Bush isn’t trying to oppress people based on his archaic, conservative values (not to mention his alleged war crimes), he might well be a pleasant person. I’ve had some friends in my life who, in retrospect, were not very good choices. I’m not judging her friendship.

What I’m judging, what a lot of people are judging, is her attempt to diffuse the situation by appealing to kindness. “When I say be kind to one another,” she said, “I don’t mean only the people that think the same way that you do. I mean be kind to everyone.”

There’s a difference between kindness, civility, and sharing nachos. She wasn’t being kind or civil towards Bush. She was being friends.

By trying to mute her relationship to mere kindness, she’s not just failing to own the idea that she’s friends with a scorpion. She’s also blaming the rest of us for not following suit. She’s suggesting that our contempt for Bush is unkind. That we’re unkind.

She’s also giving added ammunition to “why can’t we all just get along?” moderates who think that LGBTQ+ folks fighting for safety in their workplace, their homes, and their daily lives are a bunch of whiners. If Ellen can find it in her heart to be kind, why can’t you?

We saw a similar thing when Brandt Jean hugged his brother’s murderer following the latter’s sentencing to prison: If he can forgive her, why can’t everyone else? Why can’t Black people just hug and forgive everyone who’s done them wrong?

If DeGeneres feels comfortable hanging out with Bush, good for her. That doesn’t change his past harmful actions.

If Jean feels the need to hug Guyger, good for him. Guyer is still a murderer.

In a Facebook discussion this weekend about Chick-Fil-A’s anti-gay policies, someone pointed out a six-year-old HuffPost article about a gay activist befriending CFA CEO Dan Cathy. See, if he can become friends….

Two years ago, Heineken showed a transgender woman sharing a beer with a transphobic man. The woman chose to continue to the conversation, to see beyond his intolerance. See, if she can become friends….

DeGeneres’s decision to be friendly to Bush does not mean anyone else is unkind. It means that, for whatever reason, she personally has decided to look beyond his actions and beliefs. And I think her response to the controversy has been cruel to the people who need the most support right now.

In being kind to our enemies, we need to be careful not to be cruel to our friends and allies.

Despite what Nick Lowe sang once upon a time, you don’t have to be cruel to be kind.

—
Photo by Tayla Kohler on Unsplash