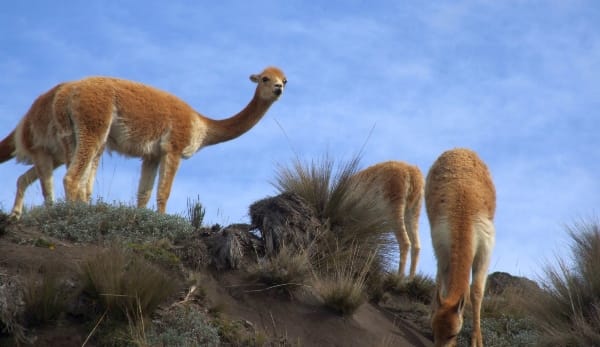 To effectively fight poaching and illegal wildlife trade (IWT), governments, NGOs and their partners across Latin America must listen to, engage with and provide incentives for the communities that live alongside wildlife.

Three people with a pile of vicuña wool

Last month, leaders from across Latin America and the Caribbean met for the first time to discuss the poaching and wildlife trade crisis in the region at the First High-Level Conference of the Americas on Illegal Wildlife Trade (IWT).

Commonly overlooked in discussions on IWT, the region is home to a number of species threatened by illegal trafficking, including jaguars, macaws and reptiles plus many timber species.

This event stemmed from discussions at the 2018 IWT conference in London, the fourth in a series seeking to strengthen international efforts to tackle IWT. And like other international policy forums, these conferences acknowledged the need to involve local communities who live alongside wildlife in efforts to combat IWT.

Despite their commitments, countries have been slow to promote community-based approaches as a key part of their strategy to tackle illegal wildlife trade, favouring methods such as increased law enforcement instead. But local people are often best placed to protect the wildlife they live alongside. As such, this approach overlooks the essential role indigenous peoples and local communities play in fighting IWT.

Immediately before the 2018 London conference, IIED and partners hosted a Community Voices event, where 40-plus representatives from Africa, Asia and Latin America reflected on the IWT commitments their countries had made. This was the IIED-led LeAP: Learning and Action Platform for Community Engagement Against IWT project’s first event bringing together community representatives to discuss IWT and their role in tackling it.

In the run-up to the wider Lima conference, more than 30 indigenous peoples and local community representatives from Latin America and the Caribbean participated in a second Community Voices event.

For example, Argentina’s project for the conservation and sustainable use of the yellow anaconda helps communities sustainably manage yellow anacondas by selling their skins to international markets. The project provides economic incentives to protect the species, rendering poaching virtually non-existent.

Similarly, communities across the Andes are generating an income from the sale of vicuña fibre. Heavy poaching and ineffective management in the 20th century had reduced the vicuña population to 10,000. But a successful trade ban, followed by the implementation of sustainable use plans, has increased numbers to around 500,000 today.

In the marine environment, Venezuela’s Centro para la Investigación de Tiburones (Shark Research Centre) has had incredible results in its work with impoverished communities on the Caribbean coast to stop the illegal capture of whale sharks using education and tourism.

What do communities want?

At the Community Voices event, participating communities developed a statement outlining their role in wildlife management (PDF). including tackling IWT. Their message was clear: “Wildlife crime is a crime against wildlife and a crime against us. Right now, the battle is being lost. With us, we can win. We call on governments and all partners here to recognise and respect our rights and our role in combating IWT.”

The statement outlines how governments, NGOs, experts and other partners can support communities, strengthening existing wildlife management skills and capacity and recognising and integrating traditional knowledge into management. It also notes the damage more militarised approaches to tackling IWT can cause to community livelihoods and traditional practices.

Were they heard in Lima?

On day two of the wider Lima conference, community representatives made four presentations in a plenary session and read out the community statement. On the same day, a side event organised by IUCN SULi showed presentations from Bolivia, Peru and Guyana on sustainable wildlife use.

The community statement had strong messages around recognising communities as rightsholders, legal empowerment and respect for customary practices. But these are largely missing from the Lima Declaration (PDF, Spanish language).

Instead, once again, governments and NGOs have chosen to prioritise cross-border intelligence, reducing demand and targeting corruption. These actions are important, but they overlook the vital contributions indigenous peoples and local communities play in wildlife conservation, and the rights and legal empowerment they deserve.

A version of this post was previously published on iied.org and is republished here with a Creative Commons License .