I credit hillary clinton for sticking up for the LGBT community. But I always get stuck on the way she puts it. 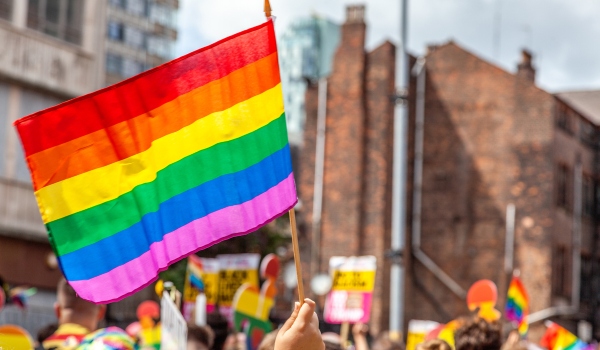 I credit Hillary Clinton for sticking up for the LGBT community. But I always get stuck on the way she puts it. The other day she said:

(It’s funny that the audience in that sentence has race, ethnicity, and union status, but not gender or sexuality. But anyway.) At the debate last week she said:

I think that a lot of what we have to overcome to break down the barriers that are holding people back, whether it’s poison in the water of the children of Flint, or whether it’s the poor miners who are being left out and left behind in coal country, or whether it is any other American today who feels somehow put down and oppressed by racism, by sexism, by discrimination against the LGBT community, against the kind of efforts that need to be made to root out all of these barriers, that is what I want to take on.

Two issues. First, she’s got no ism-word to use for this, because I guess she doesn’t want to use heterosexism, which I understand. But I don’t really like using “community” this way. Because I think discrimination against people for their sexual identity, gender identity, or sexual orientation is a problem even if they’re not part of that community, or any community, actually. Second, racism and sexism are more than discrimination on the basis of race or sex. So the problem is also that discrimination is too narrow. (The ACLU also has “a long history of defending the LGBT community,” but the discrimination is often against individuals.)

Of course, a marginalized group has a different sense of community than a dominant group. For example, in Google page hits, “LGBT people” outnumbers “LGBT community” about 5-to-1, and it’s the same for “Black people” versus “Black community.” But the ratio of “White people” to “White community” is almost 50-to-1. Maybe dominant-group members are safe enough on their own. Anyway, community is good.

If you’re being very narrow or legal, you could (not to make this a campaign issue) do like the FeelTheBern page on LGBTQ rights, which refers to “the abolishment of all discriminatory laws pertaining to sexuality.” Bernie also likes to say “people have a right to love who they want, regardless of their gender,” but that’s just narrow in a different way.

It’s not simple, and the statement is important anyway, but I’m not voting for Hillary’s usage here.

Note: If this kind of thing interests you, I’m still happy to talk about homogamy.

Previously published on familyinequality.wordpress.com and is republished here under a Creative Commons license.