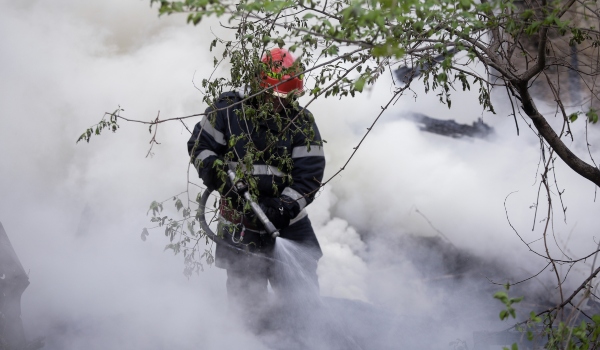 Recently, a member of the Environment and Forestry Ministry Fire Fighter Task Force, or Manggala Agni, was killed by a falling tree while trying to extinguish fires in Jambi province.

I studied forestry in Indonesia and Japan, and ever since my student days in the 1980s I have been helping firefighters put out forest fires in this country.

Land and forest fires in Indonesia often occur due to slash-and-burn techniques of clearing land for plantations.

Putting out forest fires is dangerous and difficult. Firefighters have to endure being in burning forests, facing extreme heat and hazardous smoke, not just for one or two hours, but five to six hours.

Fire fighting at Muara Medak, Banyung Lencir, South Sumatra, which has been going on for the past two weeks. Video provided by Bambang Hero Saharjo.

My first firefighting experience was in 1986 at a timber plantation, while I was doing my undergraduate research in South Sumatra. We had to be constantly alert because the fire kept on burning through the night.

I had to put out fires again in the 1990s, in 1994 during my master’s degree research and also 1997 and 1998. Indonesia suffered one of its worst forest fires then as 11 millions hectares of forest burned down.

During those times, the nights were pitch black in fire areas in peat forests. Because the smoke blanketed the area, you really couldn’t see anything. And the smoke particles were the real discomfort. Imagine burning a pile of rubbish; you’ll get suffocated from the fumes.

Besides that, we also had to pay attention to where we were stepping because you could get trapped in smouldering peatland. Areas of burned peat are prone to land subsidence.

Another challenge was how to get the heavy tools, even hoses, into the burned areas.

How do peat fires start and how do you put them out?

Fires in Indonesia’s forest are infamous for being hard to extinguish and for producing blinding and suffocating haze. This is because a large area of Indonesia’s forests is peat forests, made of rotten leaves and other organic matter that can reach tens of metres below the ground.

Dealing with fires in peatlands is different compared to other fires where you can see the fires spreading above the ground. This is not the case for peatlands.

For peat fires, if the peat is dry due to a low water table, fires will quickly spread through the roots underground, then to lower vegetation and bushes. We never know where the actual fires are in peatlands; all we can see is smoke.

One of the effective ways to stop fire in peatlands is by flooding them, so water goes into the pores among the roots and puts out the fires.

One way is to set up water reservoirs, locally known as embung, in the areas prone to fires so it’s easy to access water when needed. These reservoirs are needed because it would otherwise be difficult to find water in dry season, especially on burned peats.

Water bombings from helicopters are not effective for stopping peatland fires, because the water only reaches the tops of the trees. It quickly evaporates from the heat even before reaching the ground.

Ideally, peats should always be wet. You need to have water in peatlands, or it will be very dangerous.

The dangers of burning peats range from its impacts on the environment to the fact that it claims lives while trying to tame them.

From my experience, more often than not people get too excited about putting out the fires and prefer to continue working long hours in the burning areas. This long exposure is what causes their health condition to deteriorate.

Firefighters are equipped with knowledge and skills (to put out fires). But accidents happen. Trees are usually vulnerable during peat fires because the fires consume the roots. So, with any slight pressure or strong wind, the trees could fall.

I once nearly injured myself during firefighting in Riau as a tree of 40-50 metres collapsed near where I was standing.

These are unpredictable events. It’s good to have a high spirit to put out fires, but firefighters should be cautious too.

It’s also important to have a good strategy, including good logistics, because people are going to be in fire areas for long hours. So, you need to ensure they have enough food and water.

Read more:
Three things Jokowi could do better to stop forest fires and haze in Indonesia

In any case, as I mentioned above, water bombing using helicopters is not effective for putting out fire in peatlands compared to flooding them.

That is why supervision of land-clearing practices and restoration of peatlands are crucial.

The Indonesian government has mandated the Peatland Restoration Agency, or the BRG, to rehabilitate 2.6 million hectares of peatlands, ensuring these are wet all year round. Some 75% of those areas are located in concession areas, the rest are people’s lands or national parks.

The BRG supervises companies to make sure they restore peatlands in their concession areas. So, it should have been easy to determine who’s doing restoration or not.

Indonesia already has an early warning system, maps of high-risk areas, restoration efforts and law enforcement banning land and forest clearing using fires. If we’re serious about preventing forest fires, we have to make sure all of these efforts work. Because, if forests are burning, it is so hard to put them out.