I have training at work for how to deal with aggressive behavior and how a person gets to that point. That is, at work I receive training for tantrums. 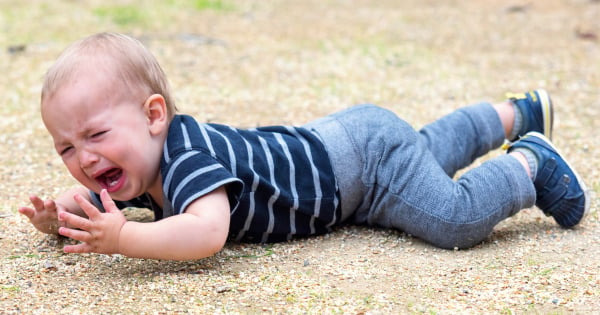 The time has come once more at the hospital where I work for our annual in-service training, our yearly reminder of all the things that state and federal regulations say that we should know. Gone are the days when it meant a long, exhausting day of lectures, many of which us old-timers could easily have recited back to the presenters. It’s an on-line training module now, faster if no less boring and repetitive.

For all the parts that I skim over, needing only a refresher, or the parts that my daughter is evidence that I ignore altogether, ( I work with my wife) there is a section that I do pay attention to. The Management of Aggressive Behavior.

Besides training in the recognition of potentially aggressive people, techniques for de- escalating those out of control, and ways to deal with those that already are, all skills that I often put to use in my days as a barfly, there is in- depth conversation about what leads a person to reach this point. Basically, what makes a person throw a temper tantrum.

I no longer use these skills to avoid getting my ass beat on Saturday nights, but there are amazing similarities between drunks and small children. The most common reasons that an adult loses control of their emotions can easily be applied to children as well.

The most common instigator has to be communication problems. Even once they become fully verbal, children may not have the vocabulary to articulate what they want or need. My five year old spent the morning angry at me because of how long it took me to understand that the “mail paper” she was looking for was actually envelopes. Fights with the teenager often start with a misunderstanding of expectations and are exacerbated by the tone of voice, defensive attitudes, and assumptions of what the other person actually meant. Drunks always seemed to think I was mocking them.

Dissappointment is another trigger. Nobody likes it when things don’t happen the way that they were planned or hoped for or when they want something and can’t understand why they can’t have it. Overstimulation only makes this let down feel worse. Children often don’t have the emotional maturity to deal with these feelings appropriately. Many adults don’t either.

This ties into feelings about being in control. Those that feel like they don’t have it or that it is being taken away from them will often lash out at those that are perceived to be taking it from them. I’m a big advocate of making sure that children are made well aware of who is in charge, but will say that by giving choices about how a situation is handled, I’ve avoided a lot of public meltdowns.

All of these lead to frustration. I will freely admit that the times when I lose my cool, either partially or completely, come either when things aren’t working the way they are supposed to or when other people aren’t acting or thinking like I feel they are supposed to. We have been very fortunate with my daughter’s temperament, but when she gets really angry, this is usually why.

There are other reasons people flip out, of course. Being hungry or overtired can lead to a lack of emotional control. Some people simply aren’t wired to be able to control themselves and need assistance regaining it. Some people just like or need the attention. A person of any age that has been successful changing a situation in their favor based on past tantrums will resort to that strategy again, even if subconsciously.

It’s been estimated that 60% of children under the age of three will throw a tantrum at least once a week. There are no readily available statistics for teenagers, but many of the same triggers are applicable. Conflict is inevitable and I make no claims of parenting expertise, but I found this to be interesting information.

If even one tantrum, regardless of the thrower, can be avoided, that has to be considered a win.