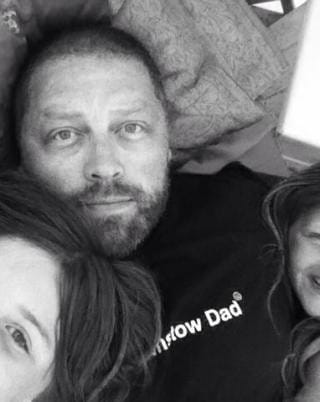 This is an interview with Jonathan Thomas, a 3D Designer and Founder of Maker. He accidentally won one of the world’s most respected awards for creativity — D&AD Black Pencil — and set up the acclaimed Walthamstow Dad project. He lives in Walthamstow, London with his partner and two daughters, aged five and eight. Follow him on twitter — @walthamstowdad

What does it mean to be a dad?

It’s changing and there are lots of clichés. I think that the clichés give dads a bad rep. Dads are an important role model and much maligned. The Mumsnet thing pisses me off. To get parenting equality, the focus needs to be on parenting. That’s not denigrating one or the other, but kids need both. There needs to be more of a positive perception of fathers.

For me being a dad is just about upping my game daily, trying to be sillier, less intense, more fun, more natural.

I did one interview about my project Walthamstow Dad (more on this in a minute). In it, they asked for parenting advice. My advice is I have no advice. Everyone’s way of doing it is different, everyone’s learning, so as long as you’re trying it’s the right thing. Unless your crack addict then you need some outside help.

How has it changed your outlook on life?

Simply, it didn’t. I thought you became a man when you had a child, but there wasn’t a profound moment of realization, I just enjoyed it. We rolled with it and we coped. I think it’s a gradual realization — the maturing process of becoming a parent is how it changes you.

“It didn’t hit home until the death of my father.”

It didn’t hit home until the death of my father. He was my role model. I’d go to him whenever I had a problem that was philosophically tricky and we’d chew the fat. I can’t do that any more. It’s all on me now.

With the birth of my first child, there were complications. Now, I grew up on a farm, so I went into it thinking ‘if I can pull a breached foal out a horse, I can handle this’. But, in the process I realised it’s really quite precarious and when it really matters the emotions overwhelmed me.

“I decided to raise money for the hospital. I couldn’t run, I hated it, so I thought use my design skills.”

The people that really matter are the doctors and nurses. They swoop in and do their thing day after day. No fuss, they just do it. I decided to raise money for the hospital. I couldn’t run, I hated it, so I thought use my design skills. I made a t-shirt that said ‘WalthamstowDad’. Someone else was organising a charity raffle and asked me for something to donate, so I gave them the t-shirt.

Now I make t-shirts that say ‘Walthamstow Dad’ on them. Money from it goes to Whipps Cross Hospital. I’ve sold so many I’ve lost count.

In the process of trying to promote it, I faced some personal criticism. It stopped being a personal charitable thing like running a marathon and became mixed up in misguided debates about the gentrification of the area. People thought I’d created the brand for the area, not the cause.

The project evolved & I decided to give the business to Barts Charity (Barts, or St.Bartholomew’s is a trust that runs hospitals including Whipps Cross). We were in a meeting about them taking it on and they asked about which bit of the IP they owned. They can’t get their heads round the fact that I’m giving whole thing to them.

What do you want to look back on and be proud of?

With big questions, I think it’s important to think small. Looking back to my childhood, I’ve realised my father orientated what he did so it provided me a good upbringing. He focused on the environment around me.

“One night, my mum woke me up and said my dad had bought a farm.”

He was a coal miner in the Welsh valleys, but he realised it was an awful life and worked and worked to get out. He went to Uni, learnt chemistry and taught. One night, my mum woke me up and said my dad had bought a farm. It was a small holding rare breed farm before all that was popular.

At 13 he bought me a herd of pedigree Welsh pigs that I was taking to shows all over the country and doing breeding. It was amazing, I had no fear. That upbringing was incredible. That was my dad’s plan. He created an environment for amazing experiences.

I grew up with no fears. Trying things which naturally tested me and I didn’t realise they were testing me. We worked together as a family. Instead of going to the pub for Sunday lunch we’d go and feed the cattle, working together and being together. I want my kids to have a taste of this.

What’s tough about being a dad?

The toughest thing for me is to try and emulate the experience I had as a child. It’s not an arrogant thing. It’s plain speaking. My kids will have a different experience, but I would like them to have some of that experience.

“My worry now is that I’m far too selfish with my own plans and career.”

My worry now is that I’m far too selfish with my own plans and career. How I can be like my dad and orientate my life around providing an enriching environment for my kids is beyond me. It’s about living a life not experiencing a life. I’m constantly looking for ways to give my kids a snapshot of that.

I think it’s about how we tailor their education to them. The school system in London is excellent, but it’s generic. So I need to give them things that will test them and that they will enjoy.

There’s that old adage about ‘my child’s going to University’. I don’t give a fuck about that, it’s what they’re good at and enjoy that’s important. I’ll try and help them towards that. If they want to do table tennis, I’ll set up lessons for them, work out how to pay for it and take them to it. If they don’t like it, that’s OK, we’ll do something else.

What keeps you on track?

It’s a constant endeavour to be more effective in all other areas of my life. I work hard to make the time for my kids. I started my first business at 26. I’ve never been employed by anyone other than universities as a visiting lecturer and I’ve always been absorbed in my work. When children happened, one of the things that had to change was my work. I’d work all hours. Having children made me re-evaluate working so much, and why I do it.

I guess I’m lucky, with my career path I can fit work and family together to spend time with my kids. We’re now trying to do that for my wife, she’s a teacher and works all the hours god sends. We’re trying to get her to work less, go part time, and juggle all that. We’ve decided to not play the big house and have lots of money game, but to stay here and have more time with our kids. That was a piece of advice I took from someone who looked really happy.

If you like this interview, subscribe to the publication to get the next one. If you know a dad who’d be interested, please pass it onto them.

This post was previously published on Being Dads and is republished here with permission from the author.