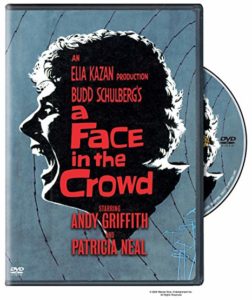 An important person runs his mouth — the important person is male, always — without thinking, and he becomes mega-successful. And then, one day…. sounds familiar? Yes, it’s the story of Lonesome Rhodes, in the 1957 film, “A Face in the Crowd.” And guess what: This Friday, October 25th, at 5:45 PM ET, it’s on Turner Classic Movies. You may say: What a coincidence. Trust me: It’s not.

Lonesome Rhodes, media rocket, got his start in jail.

When we first see him, he’s a drifter doing short time in Arkansas. He’s cheerful, handsome, and, in a good ole boy way, mildly charismatic — he’s Andy Griffith, in his first movie role.

Marcia Jeffries (Patricia Neal) shows up. She’s got a radio show called “A Face in the Crowd.” Its premise: Everyone has talent. And here’s Larry Rhodes, strumming his “Mama Git-tar.” Of course this Sarah Lawrence graduate is going to switch on her tape recorder while he sings an original song called “Free Man in the Morning.”

Romance follows. So does an audience. Soon he’s got a national TV show and bigtime sponsors.  Ah, TV. It’s just made for a guy like Lonesome. [To buy the DVD from Amazon, click here.] Watch….

This is not the Andy Griffith we’ll come to love in “Mayberry R.F.D.” He’s a drifter not because he’s had some bad luck but because he’s a blowhard, an egomaniac and a fraud. And the train he’s riding always has the same destination: a crude populism that’s really all about him. Like this:

The suckers can’t grasp his contempt for them. Neither do the women. Plural. As in: many. Lonesome passes over Marcia to marry a high school cheerleader (Lee Remick, in her film debut). No bets on how long he’ll be faithful to her.

The politics are modern as today. Social Security as an entitlement? The right was banging that drum as far back as the 1950s.

Here’s the climactic scene. Lonesome is a jerk to the technicians. In the control room, Marcia — the woman who found him and, in a sense, invented him — becomes enraged. The show ends. Lonesome drops his good old boy act and starts insulting his fans. The technician has stepped away from the console. And Marcia sees a way to administer harsh but deserved justice: She opens the microphone.

This 1957 film was written by Budd Schulberg and directed by Elia Kazan — the team that created “On the Waterfront.” That 1954 film won eight Academy Awards, including Best Picture, Best Actor and Best Director. This film? A classic — but it won no Oscars.

Why wasn’t this film honored? It wasn’t just that Americans knew the film was loosely based on Arthur Godfrey, a lovable television host with a big dark side. I suspect it was also the subject matter: the conning of the mass audience. Because the thing is, people — and Americans in particular — love being conned. Given the choice between a simple lie and a complex, ambiguous truth, we vote for the lie. And we don’t thank you if you puncture our balloon.

“A Face in the Crowd” punctures many balloons.