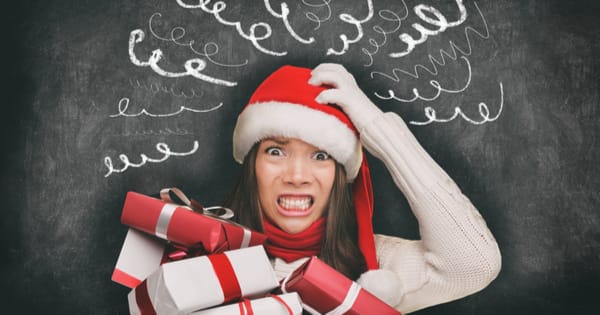 Yes, there is a third reason not to give Christmas gifts. If reasons one and two were insufficient perhaps reason three will be more convincing. Are you ready for this? Drum roll please! Here we go! The third reason that you should just say no to Christmas gifts is that the “season of giving” is actually a season of “schizophrenia”.

Schizophrenia you say? Don’t worry though. I don’t expect you to have considered Schizophrenia’s connection with Christmas gifts. The thing about Schizophrenia is that generally, people who are schizophrenic are just like you – unaware of the signs, symptoms, and complications of the illness.

For the record, I’m not a doctor but I did stay at a Holiday Inn Express last night. As such, I have to break the unfortunate news that you are unsuspectingly in a stage of the psychological disorder Schizophrenia. Sadly, you are one of the millions that are suffering as the Christmas season is truly a time of increased mental illness both figuratively and literally.

For the moment, I’m only going to share with you the figurative diagnosis of your illness. This is the part where we discuss your inability to reason and think clearly.

Before you get offended by my “intellectually lazy” assertion, take the abbreviated version of the Christmas Gift Schizophrenia Examination (CGSE). The CGSE is a short examination. You have 5 minutes to complete the examination. You may begin now!

Time is up! Stop! Put your pencils down! I could give you more time but I have a sneaky suspicion that the answers are not going to improve. So I guess it is a good thing that this self-examination is like all other self-examinations – an examination that is off the record and one that you get to keep to yourself.

Now that you have taken the CGSE, I trust you will acknowledge that you share the signs of schizophrenia – an inability to think clearly evidenced by the lack of understanding and disinterest to know about the history and origin around why you do what you do. WARNING: The figurative schizophrenia is also coupled with an annual pretense that it’s okay to blindly shop and spend and robotically eat and drink without rhyme or reason.

Thank God (Christmas pun intended) we don’t expect our children to follow our schizophrenic Christmas lead in their daily life – participating in irrational activities and doing what everyone else is doing without knowing or caring to know what or why we are participating in them.

Previously Published on The RS Project