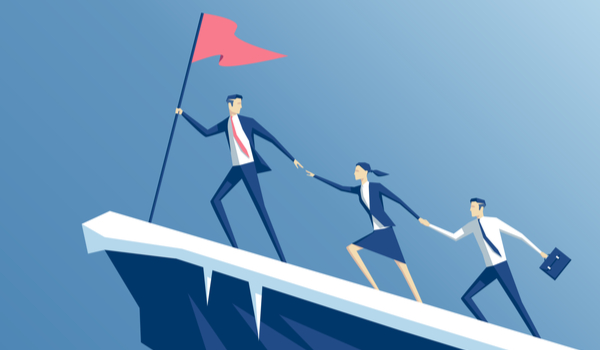 One part about leadership that always stuck with me was the part about lifting other people. Leaders are prominent, they’re out front. Like the root of the word suggests, they’re actually in the lead. We see them. It’s inherent in the role, and ironically, an invisible leader is a glaring eyesore. But being a leader isn’t about being out front, it’s not about notoriety or being the face of everything behind you. That’s not leading, that’s narcissism.

Leaders are at the top for a reason. They persevered through the climb, and they’re in the perfect position to lift everyone around them.

I learned those lessons in the Army. I saw both good and bad leaders, I learned from them all. I found role models and friends when hands were extended, when they offered to lift. The perseverance of the climb was reinforced when they turned a blind eye, or worse. Sadly, the world is rife with these unsuccessful leaders. Where their successful counterparts lift others, the notable contribution from failing leaders is masking that failure, usually as a team effort that eluded their half-hearted attempts.

I often question what separates success and failure in my own climb. After all, leaders come in all shapes and sizes. Some have incontrovertible degrees, or hard-nosed, in-the-trenches experience. Some come off as flashy, demanding, or loud, while others are soft, thoughtful, or quiet. These characteristics line up more with individual style than they do the success or failure of a leader.

So what do successful leaders have? It seems society is in awe of qualities like intellect and resilience. But I know from experience, those qualities are teachable. I refer to the winning qualities as “double E.” That’s short for empathy and endurance, although my acronym selection could cause a stir with electrical engineers and their counterparts. I don’t mind stirring the pot to start this conversation though.

Empathy is the ability to understand and share the feelings of another. That’s actually the definition. But the definition of the verb — lead — is to provide access to a place or destination. You can get people from point A to point B if you understand where they’re coming from. It really is that simple.

If you want to lead a group, any group, to a victory, your biggest tool is understanding them.

It’s how I led soldiers because I was in their shoes. I wasn’t a general, I didn’t lead fields of soldiers. I was a non-commissioned officer, and I spent my time in the trenches with them. We were rarely in an actual trench, although it did happen a few times. But when we were overseas and my driver did maintenance on our Humvee, I was there. We checked oil and tire pressure, and we talked about everything else. I listened intently to personal struggles, not because I had my own issues at the same time, but because my team could use an empathetic ear. My style bounced between hard-nosed non-commissioned officer and understanding father, but my shoulder was always there.

I carefully coupled endurance with empathy because there’s a never-ending fountain of problems for those who accept leadership as a duty. While leaders can be exceptional problem solvers, it’s more important to understand that maintaining our personal connections is a marathon, not a sprint.

Not everybody led me that way. I was failed at key points in my life, and it was very personal for me. I was struggling from post-traumatic stress and I was alone. There was no one to lift me up, I didn’t learn to cope on my own though. I saw other veterans struggling in group therapy. I looked around at our group, then I eventually looked back at my journey. That’s when I saw how I could help others. If I could lift them up before they got as low as I was, I could spare them my journey and my heartache.

We make a difference in the Army. I know that, I saw the impact. Along my transition as a veteran I learned I could continue making a difference. I founded a non-profit to help lift other people. It’s in the name for a reason, other than being infantry terms I appropriated. I still rely on empathy and endurance as a guide, and I’m frequently reminded that every good leader knows when to step back and lift others.

Empathy and endurance have another relationship though. I surmise they come from the same place, that they originate from the heart. America’s greatest veteran, leader, and president, has inferred they’re the product of a tenacity you find in the king of the jungle. Major General George Washington, Commander-In-Chief of the First Continental Army, is quoted as saying “it’s better to be a lion leading an army of asses than an ass leading an army of lions.” I would never dare to argue with the man brave enough to lead our rebellion against empirical rulers.

But… when it comes to his view on leadership and lions, I’ll say they got it right in the Wizard of Oz. You need courage to lead from the heart.