Ever since Kalki broke the news of her pregnancy to the world, she has been very vocal about her pregnancy journey. From revealing details about her unexpected pregnancy to planning for a water birth to dealing with her pregnancy cravings, Kalki has been in the news for quite a while now. The actress who was due at the beginning of this year gave birth to a beautiful baby girl on February 7th, 2020. She took to social media to announce the birth of her daughter while also revealing the name of the tiny tot who they named Sappho after the Greek poet.

In her post, Kalki revealed how pregnancy can take a huge toll on a woman both physically and emotionally regardless of whether they go for normal delivery or a C-section. She also paid tribute to all the women who go through the gruesome and intense process of childbirth by penning a heartfelt note. Kalki also wrote how many women do not get the support they need during such a time and are simply expected to do it like it is their duty. Kalki wrote, “We are survivors of the biggest battle, the one for life and existence, and should treat ourselves and others with that love and respect.” The actress also thanked everyone for their support and warm wishes and ended her post by quoting a few lines from her favorite poet. Soon, congratulations started pouring in with many celebs from Bollywood wishing the actor and welcoming little Sappho into the world. Though people were excited to know that she had a safe pregnancy and a healthy baby girl, everyone was curious to know the details of it. “Did the actress go for a water birth like she had planned or had a C-section?” Kalki finally put an end to all the speculations when she shared a glimpse of her baby along with the hospital staff who helped her deliver. 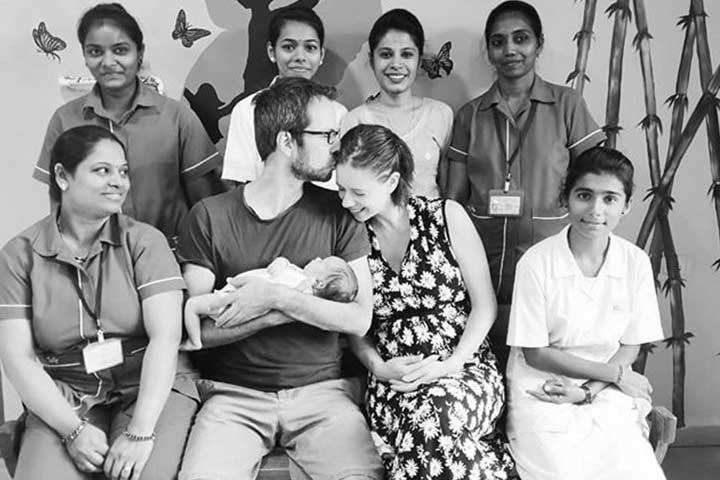 In her post, Kalki thanked the team of hospital staff at Tulip Women’s Care and the two doctors who helped her in delivering the baby. Kalki revealed how her labor spanned for over 17 hours and how she had begged them to do whatever it takes to take the baby out. But the doctors were confident in giving her the waterbirth that she wanted and just like she had planned, after an hour, she had her natural waterbirth. 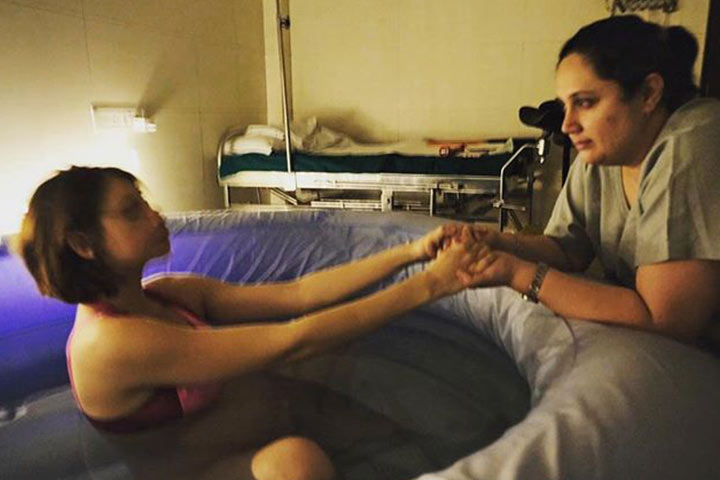 Recently, the actress also posted another pic that was taken during the transitional phase of labor along with her doula. She also penned a beautiful note expressing her gratitude to her doula. Sharing with the world how a doula can make the childbirth experience so much better, Kalki thanked her doula for being the steady voice guiding her through the whole process while also providing her unconditional support. The actress wrote, “A doula provides massages, breathing techniques, and exercises during active labor, other support like hypnobirthing, a birth plan for the hospital, your first bonding with your baby, breastfeeding and so many other essentials which believe me, when you’re a first-time mum, feel like your first day at a new school all over again! ”

The actor revealed how she had no clue about doulas until she had gotten pregnant. The new mom said that no matter how much you prepare yourself by reading up and asking your doctor, there are going to be several challenges that you are faced with which you can only know through experience and practice. The actress also revealed that the photo was taken when her contractions were at their peak and she was ready to push the baby out, which would explain why her face is a blur.

Kalki’s post is a beacon of hope for all women who wish to go for water births or seek the help of doulas to help them with childbirth. And just like Kalki had mentioned in her post, instead of pulling each other down for having a C-section, it’s time we realize that childbirth is an intense experience and women need all the support they can get to truly heal.