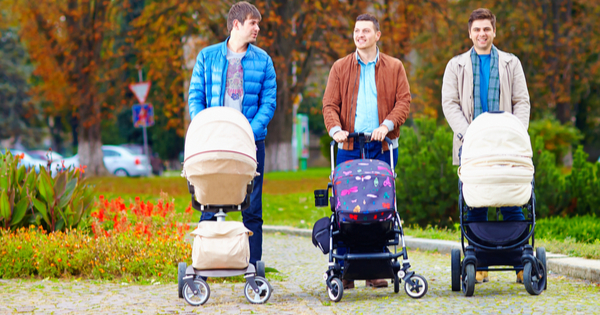 The time is right….The stars have aligned….The Gods have spoken!

That is the feeling that every new father and mother go through when they are blessed with the bundle of joy and a pure sign of nature’s benevolence. In retrospect and all honesty, that was also how I felt when I held my daughter for the first time.

And as I was planning to spend the maximum time with her taking care of all the small duties and details that come with a newborn baby, the reality hit me.

I had to return to normal working office routine, which basically meant 9 – 10 hours of corporate slogging and my wife was left alone to shoulder the new parental duties. as there was no paternity leave for men or fathers.

Its 2019 now and I am sure mine is the story of many young dads who want to play a larger part in their children’s lives right from day 1, but find themselves in a fix because of the societal expectations placed on working men.

Today Fathers are carving out new territory and in retrospect of yesteryears, it is amazing to see how fatherhood has transformed.

For decades, there has been a fight for gender equality and struggle to treat them at par, even though we have made moderate progress, fathers now are free to build emotional, deep connections with children. But is the government and workplace doing enough to bring fatherhood at par with its importance in today’s world?

People of my generation grew up thinking gender equality was going to be real, allowing us truly equal opportunities at work and at home. The women being equally ambitious as the males and spoke about similar terms about work and family.

But while we were shaped by a new era, Government and workplaces are still stuck in the past. Take for instance the maternity amendment act of 2016 which increased the leave period to 26 weeks, and directed workplaces with over 50 employees to provide creche services.

But even this hard-won victory emphasizes the concept that only women should be involved in child care. Around the world Japan leads the world in paid leave for fathers. It is the only country that offers at least six months at full pay for new fathers.

The US fares the worst, has no paid parental leave. New parents get 12 weeks of unpaid leave but the law applies only to those at a company of at least 50 employees, and have worked for at least a year.

Back in 2015, when Mark Zuckerberg announced his 2 months paternity leave it was widely applauded as an equal parenting initiative. Also recently Zomato the food delivery portal made waves after rolling out a 26-week paternity leave for its employees.

Among other companies, Pepsico India had launched 12 weeks paternity leave where an employee can avail paternity leave up to a maximum of two deliveries during his tenure of service.

And yet, India remains among the 90 out of the 187 countries in the world that do not have national policies to ensure that new fathers get adequate paid time off with their babies.

But, lets also try and get a larger perspective from all the affected parties. Research shows that when caring for their baby, more support from the father can increase the mother’s well-being and they’re less likely to experience depression after the birth. Since new mothers are more likely to take time off, their careers run a risk of being jeopardized.

Having dad around during those ever-so-important first weeks of a fragile new life can enable working moms to return to work sooner (if they so choose) and keep on top of their careers. For employers a well-structured paternity leave policy can also weaken justifications for discriminating against women in their childbearing years in the workplace.

Lastly, lets not forget the benefits that fathers have as they spend more time with their babies. Dads on parental leave, can help their children develop emotionally and mentally, with improved cognition and mental health outcomes. Studies also suggest that longer paternal leave times are associated with higher cognitive test scores.

Fathers who demonstrate empathy and sensitivity especially as they care for little boys, share an opportunity to exhibit themselves as nurturing father figures and something that boys increasingly need to see as they grow up and also something that the world needs. Then why is paternity leave entitlement not granted by default?

Here is another angle to the argument. It has been reported by Bloomberg

“Men still think their careers will suffer if they take leave, according to a new Deloitte survey out this week. More than a third of the 1,000 respondents said they felt that taking leave would “jeopardize their position” at work. More than half said it would be perceived as a lack of commitment, and another 41 percent worry they would lose opportunities on projects. “

As some proportion of fathers are fighting off the stigma and wants to bear the responsibilities of being a father and a parent, it seems a certain proportion still prioritize their career and feel that they will fall off the bandwagon.

This reminds me of a saying I read sometime ago :

Personally, I believe fathers should embrace the paternity leave initiative with open arms and understand what fatherhood really means. Apart from enjoying the first days with your newborn baby you will also end up being a big help to your partner. This would be a far cry from a vacation but this will ensure to make lasting memories and something you would want to recall and retell as your kid grows up.

What does the Stats say on paternity leave?

Fathers involvement in parenting across the globe (Credit : OECD)

The above graph depicts time spent by men on childcare or housework per day across the globe. It’s clear that even though gradually but men and fathers are slowly accepting and in some cases pushing for the change where they can be an equal partner in the true sense by accepting the parent role right from the birth of the newborn.

It’s clear that the United States is the biggest laggard when it comes to providing paternity leave to its working male employees. Whereas countries like South Korea and Japan are the leaders of the pack providing 52 weeks of annual leave for the fathers.

It seems that the most developed nations are still playing catch up when it comes to fighting off the stigma, that fathers do not need to get involved in the crucial early days of parenting.

As there is no official policy, most parents or fathers do not receive any pay and instead rely upon FMLA ( Family and Medical Leave Law ) to protect their job for a period of 12 weeks. But FMLA only guarantees job security for the said period but promises no pay during this period.

Eligible employees may take up to 12 workweeks of leave in a 12-month period for one or more of the following reasons:

In addition to an entitlement to leave, the FMLA requires that employers maintain employees’ health benefits during leave and restore employees to their same or an equivalent job after leave.

The law sets requirements for notice, by both the employee and the employer, and provides employers with the right to require certification of the need for FMLA leave in certain circumstances.

The law protects employees from interference and retaliation for exercising or attempting to exercise their FMLA rights. The law also includes certain employer recordkeeping requirements. As of 2018, the only states that require paid paternity leave are California, New York, New Jersey and Rhode Island.

But how do you know if you qualify for FMLA?

You are protected under FMLA if you are :

The best way to determine that your employer covers you for paternity leave is to discuss it with the relevant person in HR. In cases there is a handbook that lists all the benefits including any leaves borne by the employers.

As most companies for their own policies around this, it’s always worth to try and negotiate for more time and flexibility suitable to your cause. Finally, as you are on leave and not receiving a paycheck from your employer, you won’t be able to contribute to your 401k or flexible spending account

For the employees in the government sector, there are certain benefits provided like:

For private sectors, paternity leaves are still unorganized and are defined at individual company level. The most generous here are recent changes made by Ikea and Zomato. Below are more details on some of the enterprises :