Trillions could be added into the economy with no new taxes, and nothing added to the national debt. 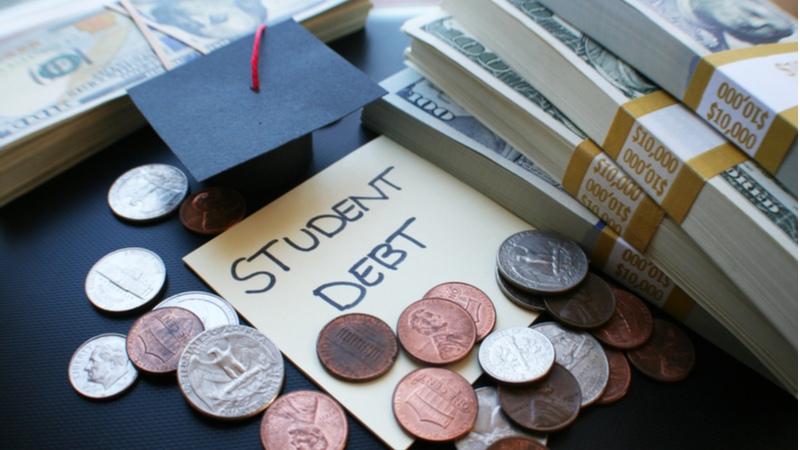 President Trump needs new ways to stimulate the economy in the face of a grueling economic slowdown. He has no great options left. The Fed Funds Rate is essentially zero. Tax cuts for corporations and the wealthy- including the $1.6 million stimulus recently given to 43,000 millionaires- won’t help those who need it. Additional, direct payments to the citizens will be expensive. Suspending interest and deferring payments on student loans won’t hurt, but really will not help the economy either. Every conceivable spending/stimulus plan will undoubtedly require a congressional appropriation or will increase the national debt even further . . .

Long before the coronavirus crisis, student loans were strangling the economy. 55 million borrowers and cosigners are struggling under $1.8 Trillion in debt (up from only $175 billion in 2000). Over $100 Billion in interest alone is being sucked out of the citizens every year, and this is increasing at a terrifying pace. Shockingly, 80% of the borrowers aren’t able to pay down their principal or aren’t able to pay at all. Because these loans have been uniquely stripped of both bankruptcy protections and statutes of limitations, many years of White House Budget data show that the government has- incredibly- managed to eek a small profit out of defaulted loans. So there is no incentive to rein the system in. Young people aren’t starting families or buying homes. Older people are being forced to cash in their retirements. People are fleeing the country. Some are even committing suicide.

Republican Trump appointee, Wayne Johnson, recently resigned his position as head of the federal student loan program and made a radical call for student loan cancellation. Johnson noted that the lending system was “fundamentally broken”. Johnson’s comments indicate that this problem is far worse than the Department of Education has said publicly. He said he came to this conclusion after having a “firsthand look” at defaults, which we already know are running at about 40% for 2004 borrowers who were only borrowing one-third of what students are borrowing today. One can only wonder how bad the internal projections must be for more recent students.

What no one has had the courage to yet publicly say: the federal lending program is failed. Done. Finished. In fact, it is fair to say that at this point, it is a national threat.

Bureaucrats in and around the Department of Education will surely protest loudly at such a move. But 40 million citizens who are being crushed under the weight of this predatory, big-government lending behemoth will cheer, and the economy will flourish. Some analysts have predicted that GDP would increase by about $100 billion for the next ten years, but these analysts neglect the increased borrowing capacity that such a move would free up. This would be another $1 Trillion or so that would be injected into the economy in the near and medium-term.

There simply is no more stimulative, expedient, or more inexpensive way for the President to quickly and dramatically stimulate the economy. He should immediately seize this opportunity.

Rest assured, the taxpayers (actually the Department of Education and its crony contractors) will be fine. The federal government has been profiting wildly on this lending system for ten years running. While no one- not even the Department of Education- can say with accuracy how much of the $1.5 Trillion in outstanding federal loans is interest vs. principal, it is likely that the former is significantly larger than the latter. So on balance, the taxpayer should more-than break even on such a move.

Trump should do this, and create a far more efficient higher education financing system that doesn’t wreck the citizens, hyper-inflate the price of college, and enable a predatory big-government monstrosity such as what the Department of Education has become.

When President Lyndon Johnson signed the Higher Education Act in 1965, he declared that student loans would be “free of interest”. President Trump, himself, decried the fact that the government was making a profit on these loans. This is Trump’s opportunity to follow that instinct. If there is to be a federal student loan system going forward- a debatable proposition in itself- It’s best to make them fair again.

This is an historic opportunity for the President to cure a recession, drain the swamp, and strongly endear himself to tens of millions of voters who would otherwise have opposed him this coming November.

If you believe in the work we are doing here at The Good Men Project and want a deeper connection with our community, please support our mission and join us as a Premium Member, today.