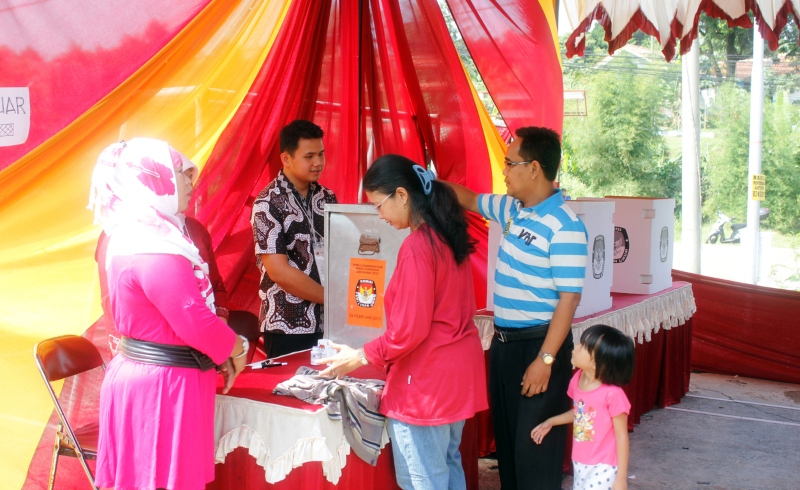 Candidates for Indonesia’s presidential election next year recently announced their choice of running mates after months of speculations. The names are a political compromise between political elites that ignores the public’s hopes and survey’s results, experts say.

Incumbent President Joko “Jokowi” Widodo, who ran his campaign on pluralism and a progressive human rights platform in the 2014 election, in a dramatic twist, chose the conservative chairman of Indonesia’s Ulema Council Ma’ruf Amin as his candidate for vice-president. The appointment of Ma’ruf shocked many as it was widely reported that Jokowi would choose former Constitutional Court chief justice and also Islamic pluralist Mahfud MD as his running mate.

We asked experts to explain what’s behind these last minute decisions.

A compromise for party coalition

The naming of 75-year-old Ma’ruf as Jokowi’s running mate may please his coalition. Given his age, Ma’ruf will not be a threat for the next 2024 election.

Different with Ma’ruf, the younger 61-year-old Mahfud can become a potential threat for major political parties in the next election. Mahfud’s vice presidential nomination can open a path for him to run for presidency in 2024, something that some political parties would want to avoid.

Had Jokowi decided to choose Mahfud, he would have risked losing support from key political parties like Golkar. This could have opened up a possibility of another coalition that supports a different candidate aside from Jokowi and Prabowo.

Meanwhile, Prabowo chose Sandiaga as his way out to a deadlock in a discussion between his party coalition on his vice presidential candidate. Sandiaga is a safe bet amid tensions in Prabowo’s coalition party. Democrat Party wanted SBY’s son as Prabowo’s running mate while other parties that offered a more neutral candidate outside political parties to get more votes.

Politics aside, the best vice presidential candidate for Jokowi would have been Mahfud. Survey results show that his electability is higher compared to other candidates. His figure is acceptable to all Muslim voters. Mahfud’s experience in the administration will also complete Jokowi’s leadership in legal and anti corruption agenda.

Meanwhile, the perfect running mate for Prabowo would have been Agus. Agus can attract young voters. Based on a survey, his electability is also higher than Sandiaga. But, as it turns out, political elites have the final say in determining both Jokowi and Prabowo’s vice presidential candidates.

Ma’ruf first strong point for Jokowi’s presidential bid is that he crushed the possibility of a third coalition that may reduce the likelihood of Jokowi to win.

Second, Ma’ruf’s strong image as a Muslim leader is expected to protect Jokowi from any black campaign using religion from his rival that happened in the previous election. In the 2014 election, Prabowo’s camp labelled Jokowi as not Islamic enough due to his support to pluralism.

Jokowi is unpopular among Muslim voters due to his authoritarian approach to Muslim conservatives during his administration. Ma’ruf appointment is expected to sway Muslim’s voters.

However, Ma’ruf may also hurt Jokowi’s electability among the minorities. Ma’ruf was one of the key figures that sent Governor Jakarta Basuki “Ahok” Tjahaja Purnama to jail due to blasphemy.

Sandiaga’s strong point also lies on his relatively young image that can attract millennial voters. A successful businessman, Sandiaga may also be beneficial for Prabowo in terms of financial support for the campaign.

Ma’ruf nomination is part of Jokowi’s tactical move to attract Muslim’s voters. It seems that Jokowi wants to prevent the same war waged by Prabowo in the previous election from repeating.

Ma’ruf was chosen because he was considered safe by other parties in Jokowi’s coalition. Other political parties accept Ma’ruf’s candidacy as he will not be a threat in the 2024 election.

Ma’ruf’s broad experience in the legislative body, the administration and Muslim organisations is expected to maximise Jokowi’s political machine to win the election.

However, Ma’ruf’s image does not seem to match with Jokowi’s nationalist figure. In another word, Jokowi and Ma’ruf’s branding among voters is not solid enough. Jokowi may need to create a strategy to convince voters that he and his running mate support the same agenda.

Sandiaga’s appointment is also a political compromise by Prabowo to ensure that his coalition remains intact.

Prabowo’s decision to pick Sandiaga is due to his contrasting background with Jokowi’s running mate. Sandiaga is young and a professional businessman. This image may benefit Prabowo among young voters. Young voters with a total number of up to 70 million voters or a third of Indonesian voters are key to win the next election.

Sandiaga’s appointment may also strengthen the political campaign of behind #2019GantiPresiden (#2019ChangePresident) launched by Prabowo’s camp. Sandiaga’s young and professional image will be a perfect antithesis for Jokowi’s old and bureaucratic image.

Prabowo also picked Sandiaga over other candidates was due to his business connections that can turn into a huge resources for his campaign.

Ma’ruf for Muslim voters, Sandiaga for young and female voters.

Arya Fernandes, researcher at Centre for Strategic and International Studies

The naming of Ma’ruf as Jokowi’s running mate represents Jokowi’s compromise against demands from his coalition and external parties. Some political parties did not approve of Mahfud’s appointment. PKB had even threatened to pull out from the coalition if its chairman Muhaimin Iskandar failed to become Jokowi’s pair. Jokowi also received similar threats from the country’s largest Muslim organisation’s Nahdlatul Ulama should he decided to run with Mahfud.

Therefore, there are two reasons behind Jokowi’s decision to pick Ma’ruf.

First, the decision was Jokowi’s attempt to accomodate demands from other political parties. Second, Ma’ruf appointment is also his anticipation against his rival’s strategy to use the Islam card. A respected Muslim leader, Ma’ruf is expected to save Jokowi from any attempts to discredit him in the religious front.

Meanwhile, Prabowo’s choice reflects a change in Prabowo’s campaign narration. With Sandiaga, Prabowo will build a new image that supports investment, market and tolerance. Sandiaga represents a new group of political elites from business sectors. He is also expected to draw votes from young people and women.

The candidate Jokowi chose as his running mate contributes to a lack of political regeneration in Indonesia’s democratisation process. Joko Widodo, the incumbent, chose a 75-year-old male cleric.

Women comprise half of the national population. But they are not represented in the current pairings. The politics of election is still dominated by men, more specifically men over the age of 45.

This shows that it’s important to revisit the age requirement to be nominated. Currently the minimum age to run in the legislative election is 21, while the minimum age to vote is 17. Why the gap? If a 17-year-old is considered mature enough to have a political decision – hence allowed to vote – then why not allow them to run?

The minimum age to run for a seat in the parliament in countries such as Australia and Germany is [18 years old]. This can be a strategy to prepare the young in politics and to provide a better representation of the voters population.