Scientists calculate that global fish catches could rise by millions of tonnes a year if nations stick to the Paris Agreement on global warming. 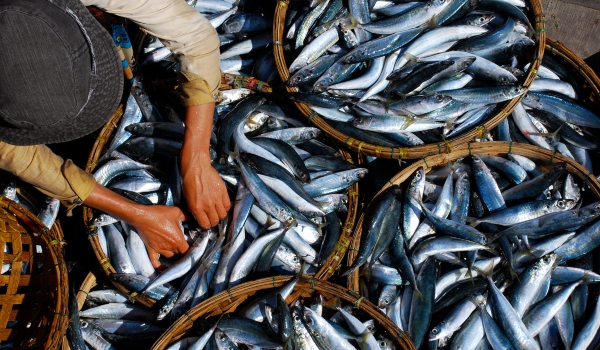 Swiss and Canadian scientists have worked out a simple way to save more fish for the supper table: sticking to the Paris Agreement to limit global warming to 1.5°C above the historic average should be enough to increase fish catches by six million tonnes a year.

But if the world’s nations go on as they have done – burning fossil fuels, releasing greenhouse gases, and inexorably changing the climate – then global average temperatures will rise by 3.5°C and global fish catches will fall dramatically.

A new study in Science journal calculates that for every degree Celsius that the Earth does not warm, fish catches could increase by 3 million tonnes. So holding warming to two degrees below the rise predicted under a business-as-usual scenario would net the additional six million tonnes.

Fisheries scientists have already reported change in potential ocean yield, and accelerating change in the habitual ranges of fish species.

In the North Sea, which is already warming four times faster than the global average, haddock, lemon sole and plaice are becoming less common, and the sardine − a popular Mediterranean species − is beginning to move northwards.

Other research has suggested that the unhappy mix of changing sea temperatures and increasing acidification could knock seafood off the menu for millions.

The research, led by scientists at the University of British Columbia (UBC) [http://oceans.ubc.ca/ ]in Vancouver, confirms that the people with most to lose are in the tropics, as fish move to cooler waters.

The scientists have already predicted that by 2050 the world’s fishermen could expect to see a loss of revenue of $10 billion a year if climate change continues at the present rate.

So the new study does not promise bigger catches, but provides a measure of what to expect in the way of fish catches if they do not contain global warming to a level agreed by 195 nations at a UN climate conference in Paris last December.

“The benefit for vulnerable tropical areas is a strong reason why 1.5°C is an important target to meet,” says lead author William Cheung, director of science at the Nippon Foundation-Nereus Programme, and associate professor at UBC’s Institute for the Oceans and Fisheries.

“Countries in these sensitive regions are highly dependent on fisheries for food and livelihood, but all countries will be impacted as the seafood supply chain is now highly globalised. Everyone would benefit from meeting the Paris Agreement.”

Greater pressure
But those benefits will vary between regions. The findings suggest that the Indo-Pacific area would see a 40% increase in catches at 1.5°C warming versus 3.5°C. The Arctic catch would benefit under 3.5°C as more fish migrate there, but the region could also expect greater pressure on fisheries as sea ice melts and climate change accelerates.

The researchers make their calculations knowing that the Paris Agreement may be politically precarious, as the US president-elect Donald Trump has declared that he does not believe in climate change.

“The trend we have projected is already happening − it’s a train that has left the station and is going faster and faster,” says Gabriel Reygondeau, a UBC researcher.

“If one of the largest CO2-emitting countries gets out of the Paris Agreement, the efforts of the others will be clearly reduced.

“It’s not a question of how much we can benefit from the Paris Agreement, but how much we don’t want to lose.” – Climate News Network