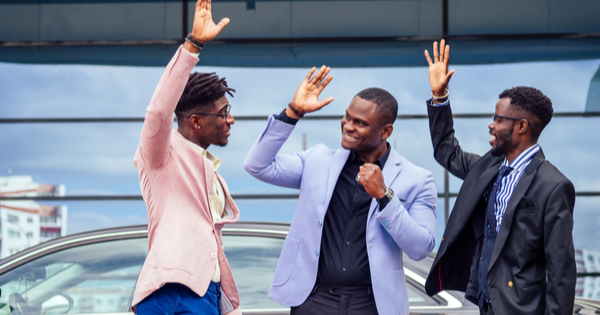 My brothers, tell someone you love them today, not solely because it’s good for them to hear it, but it’s even better for you to say it. I can tell you that one of the worse feelings in the world is standing over the casket of someone you love and not being sure they knew how much you loved them. Having to live the rest of your life wondering if sharing how you felt might have opened them up to being more expressive about what was going on in their life to maybe even giving them a reason to keep living.

Just because the world tends to be a cold place doesn’t mean we have to play it cool all the time. Black men, especially, are so damn scared to be expressive. Our human development is all wrong. I’m going to keep it real, the way we are most often socialized is fucked up. We keep stuff bottled up until life explodes until we fall and can’t get up on our own until we are down and out for the final count.

It would be so much easier just to let people know how much they mean to you know while you still have the chance – when they might still be able to use your love as fuel to get through another day. But we don’t. Instead, we carry around love and the fuel that love provides others like we are rationing it for an apocalypse. But the apocalypse is happening inside many of us right now. We bring disaster on ourselves and those we love with our lack of empathetic expressiveness and our restrictions on unmistakable love.

When I haven’t talked to my son or the handful of ‘real’ male friends, my brothers from another mother, in a few days, I get worried. I’m sure everyone is okay, but there is always a little irking inside that says, “check-in just in case.” You don’t ever want to get that phone call again, where the voice on the other end tells you that someone you loved is no longer here. You don’t ever want to feel as dead inside as you did when you discovered that your ‘Three,’ the brother you knew as ‘Vigilante,’ was no more.

Damn men, most notably Black men, and our homophobic worries and steely fake genetic exterior, telling someone you love them, especially another man, doesn’t make you gay. Besides, who gives a rat’s ass about someone’s sexuality if you aren’t sexually interested in them anyway. Male or female, if you aren’t into them, you aren’t into them. So, keep it moving.

Still, some of the cavemen among us behave as if admitting you love another man is a sure sign that you are gay. To that archaic way of thinking, what could be worse than a man being gay? That’s an easy question to answer: lots of things, especially a brother who you love being dead.

And this fake-ass tough guy genetic exterior is just that phony as hell. If we were so tough, why not say you love someone? Why hide your feelings? I’ll tell you why we don’t express love openly because we aren’t that damn tough. Tough people show love when it’s easy; we don’t wait for the regret of hard times to do so.

Men are breaking down everywhere – mentally, physically, and spiritually – from not loving and expressing love openly. Then like my father, we break all kinds of shit: material stuff, finances, feelings, people, especially women and children. All because when we had the chance to express love to say those three simple words to our sons, fathers, to one of our boys, to tell someone, anyone we loved them when it was easy, we didn’t. We kept it inside; we made it hard, we self-impose an unnecessary rigidity on our already hard lives. We harden our hearts voluntarily. And for what?

Do it today before it’s too late. Do it now, while others are still able to hear you. Do it right now because you need to say it as much as others need to receive it.