I Have (Had) Enough by Jeff Jacobson (Book Excerpt) 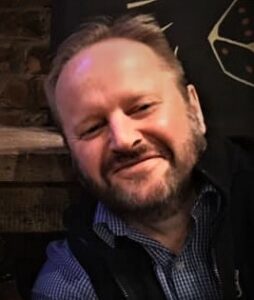 You wouldn’t snuggle into my chest. You’d push outward and challenge me with a feat of strength, crawl up onto my shoulder and look all around. I think you were trying to be at least as tall as me.

I remember being proud of you back then because when other babies’ heads flopped all around and gazed cross-eyed at the world, you held your head straight and your neck firm and your eyes darted like lasers around the room. If a man walked by that you didn’t know, you focused in on him and sized him up.

You sized me up a lot too, come to think of it. You were systematically analyzing me, testing for weak spots to exploit later. You focused those laser eyes on mine and soon they were arguing with me, even though you couldn’t talk yet.

When you did decide to talk, there really wasn’t a first word, because you just started speaking in full sentences. It was like you were waiting for the right moment to make your declaration. I clearly remember what you said:

“Mommy and Daddy are lying on the couch.”

That’s probably because we were exhausted.

Exhausted because you wouldn’t take naps like other babies. You needed about five hours of sleep at night, maybe six if we were lucky, and you’d only go to sleep if the vacuum cleaner was running. Pretty soon I made a tape of the vacuum cleaner running.

Then it seemed like one night we laid you down in your crib and at five in the morning, you were standing there in your crib, waiting for us. The next morning you stopped waiting and just crawled out.

I’m pretty sure we never potty trained you. I think you took off your own diaper and that was the end of that.

We had to take you in for testing before you could enter kindergarten. The teacher came out and said in her twenty-five years of education that she had never seen anything like you. She put you through to first grade because she thought you’d be bored in kindergarten. Maybe you were also bored in first grade, because that’s when we got to know your teacher and the school principal very well.

You may not remember your first stunt, on your very first day of school, but I do.

You took it out.

Just like that famous Seinfeld episode. Maybe you thought it needed air, or maybe you wanted to show it off, but either way, that’s when we got to know the school psychologist too.

A couple of weeks later, your teacher took something away from you. I don’t remember what it was, but it was something very special to you and it was distracting you from paying attention in class. The teacher put it up very high where normal children would never dare attempt to retrieve it. A little while later your teacher stepped outside to talk with another teacher. In that moment, you took her dare and constructed a ladder out of chairs and desks and retrieved that something very special while the normal children cheered.

The first time I met your second-grade teacher, she had tears in her eyes. They weren’t tears of joy. She suggested medication might help, and I wasn’t sure if she meant for you or for the rest of us.

We knew lots of parents around this time who also had kids your age, and they were such well-behaved little boys and sweet little girls that we figured we were the worst parents ever. We tried taking a course called Growing Kids God’s Way, but soon we learned we’d be stuck growing you your way.

You learned how to play the drums, and one time I watched you come and play for your little sister and brothers at their school. You sent me a perfectly spelled text with one hand in your pocket while you were still on stage drumming, and I don’t think you missed a beat.

I still haven’t figured that one out.

When you turned sixteen, you got a tattoo on your arm. It’s a picture of a cross with the wind swirling around it or some such thing. We’ve taught you a lot about God over the years and about that cross, but I think if you met God in person you would wrestle Him and try to put Him a headlock. You’d tell Him you believe in Him but that you need to fight Him instead. Just like you do everything else.

Speaking of fighting, when I caught you smoking in the upstairs bathroom, you said you were just trying to light a Milk Duds box on fire. And you really thought I’d believe that? I argued that it didn’t smell like that kind of smoke and why in the world would anyone want to light a Milk Duds box on fire anyway? But you presented your evidence and shouted your objections and conducted your cross-examination, and by the time your defense rested I almost believed you.

I don’t think you were ever designed for the classroom and your grades reflected that. So you took a firefighting course your senior year and were the first one to volunteer to repel down a very tall building. Later on, your instructor, the city’s fire chief, looked me straight in the eye and told me that he’d been around a long time and he’d had a lot of young men come through his program, and he didn’t say this very often to too many parents, but he wanted me to know that I had a very special son.

And I believed him.

You had a bit of a hot temper when you were a teenager, and you punched some holes in our walls and stomped out of the house and you made your mother cry. But then you’d always come home and admit you were wrong and apologize and hug us and tell us how much you loved us. You had to lean down to hug us and we’d try to hang on to the wide span of your back and shoulders and pull you in tight because you never stood still, and you wouldn’t stop jumping and moving and you wouldn’t stop leaving with your friends.

You had a lot of friends, just like you do now, and that always made us smile.

You signed up to become a Marine on the 70th anniversary of the attack on Pearl Harbor. I’m pretty sure that made your grandparents proud, especially your grandfather who remembers the actual day Pearl Harbor was attacked. They pray for you all the time, just like we do because God knows we need all the help we can get.

You left for boot camp on September 11th. That made us all proud.

Shortly after you enlisted, before you left for San Diego, your recruiter told you that you scored so high on the military entrance exam that you qualified for pretty much every job they had.

I can’t even begin to break down the irony of all of this, but I think it somehow started with a baby who wouldn’t bend at the knees; the very one who would size up strangers with laser eyes; the little boy who made a ladder out of desks and chairs; the teenager who texted while drumming, lit that Milk Duds box on fire, and rappelled down a tall building.

The one who would probably wrestle God if given the chance.

Before you left, we heard that boot camp for the Marines was about breaking you down to nothing so that they could build you back up into who they wanted you to be. To that, your mother and I said, “Have at it,” because that never worked for us. 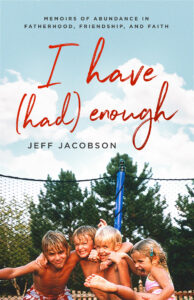 Excerpt from: I Have (Had) Enough: Memoirs of Abundance in Fatherhood, Friendship, and Faith.

JEFF JACOBSON is a New Jersey native who now calls the Hoosier state his home. He’s a father of four and he’s been married to his college sweetheart, Kristie, for nearly 30 years. His greatest joys—and his best stories—come from being a father, a friend and, a follower. He is also the author of So I Go Now: Following the Jesus of Our Day.

Tags: fatherhood, having a son, i have had enough, jeff jacobson, marine, memoir, parenting, raising a family