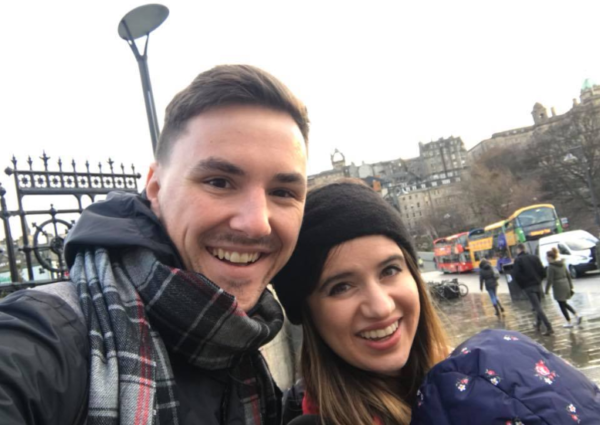 I’ve been married to my wife for almost 7 years. We have a two-year-old daughter named Andie. We’ve been traveling around the globe for an entire year. And neither of us can imagine life without the other.

But we got married at 19 years old.

Want to know why?

Because we were both Christians at the time and we believed that having sex before marriage was a sin — and we really wanted to have sex.

In fact, the zealot that I was at the time, that’s even what I told Micaila’s (my wife’s) Dad when I sat down with him to ask for her hand in marriage (albeit I was a bit more strategic than that). To my surprise, he said “okay.”

What can I say — I’m likeable!

Before we dated, we hadn’t known much of each-other at all. We lived in the same city but went to different high-schools and we were friends for about 3 months before we started dating. All in all, that’s like a year and quarter of knowing each other before I put a ring on it.

We didn’t think so.

Not at the time, at least.

Of course, we soon found out that this whole commitment thing was really effing difficult.

Our first year of marriage was a lot of fighting, a lot of threatening divorce (even though neither of us had the balls, considering our religious beliefs), and a lot of trying and failing to communicate with one another.

You see, both of us had only spent one year at College, then we got married and went to live with one another. Which meant we only had one year to live on our own — in between living with family to living with our spouse.

That transition was really bloody difficult.

I’d compare it to forcing two toddlers to live together for an entire year — my god, we were young and stupid.

I remember getting angry with Micaila for not putting the cap on the toothpaste. I remember nitpicking her as she gave me a haircut and, in retaliation, she refused to continue. Out of stubborness, I tried to cut my own hair and failed desperately. I wore a hat for a while after that.

I remember me trying to discuss challenges we had and her walking out of the room without a word because that’s how she’d learned to deal with conflict growing up.

I remember yelling at her and wanting her to yell back because that’s how I learned to deal with conflict growing up.

By all accounts, things probably shouldn’t have worked out.

We probably shouldn’t have stayed together.

We certainly shouldn’t be as in-love as we are today!

And yet, we are best friends. I mean that. We inspire one another, we laugh together, we travel together, we are raising our daughter together — we’re a team. And we’ve always got one another’s back, no matter what happens.

Of course, it wasn’t until year 2 or 3 that a healthy marriage started manifesting. We started forgiving one another, we learned that like 90% of stuff isn’t actually a big deal, we accepted one another as we were.

So doesn’t that negate our commitment to one another? Since that’s what the entire marriage thing was based on…

Because now, I’m deeply in love with the woman I married at 19 years old. She’s helped me to become less selfish, more caring, kind, humble, and more capable.

I’ve done that plenty in my life.

But by sheer luck of religious upbringing, I stayed with my wife through thick and thin.

And I’m a different person — a far better person — because of it.

You see, there’s immense joy on the other side of long term commitment, immense satisfaction, immense fulfillment.

Most people, in an effort to get quick-fix dopamine hits, only pursue things so long as they’re pleasurable right now in this moment, not realizing that the deepest and most pure joy is yet to come, that it requires years and years of unerring faithfulness.

In fact, I’m willing to bet that one reason so many people are depressed today is that they’re hooked on social media, television, video games, and other immediate pleasures. They haven’t dedicated themselves wholeheartedly to another person. They haven’t dedicated their life to a clear-cut, long-term purpose. And they fleet from passion to passion, hoping to find the thing that makes them happy. But it’s not the thing itself that brings joy, it’s an unerring commitment to the thing, it’s a refusal to quit when the going gets hard, it’s a relentless determination to make things work.

That will provide you with immense joy.

But first, you have to make a commitment — to yourself, to your ideal life, to another person, to something.

And I’m talking about a life-long commitment.

But you’ll find much more happiness and satisfaction with the life you’re living if you commit yourself completely and utterly to something or someone you believe in.

I know I have.