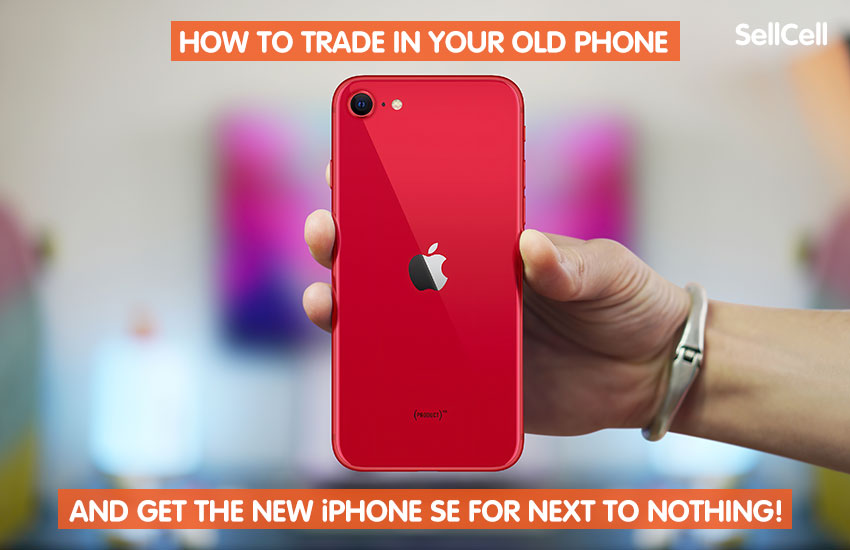 Amid the COVID-19 lockdown, Apple has silently added a new handset to its affordable iPhone range, the iPhone SE. The new iPhone SE is a long-awaited upgrade over the 2016 model of the same name, and — needless to say — the flagship internals and reasonable pricing make the new variant well worth the wait.

The original iPhone SE, launched in 2016, was a surprising hit for the Cupertino company, having sold several millions of units across the globe. And now, as we are in the middle of a global pandemic with stringent measures in place to contain the spread, it remains to be seen if the new model can replicate the success story of its predecessor.

Without further ado, let’s take a quick look at what the new cheaper iPhone brings to the table.

Specs and features of iPhone SE 2020 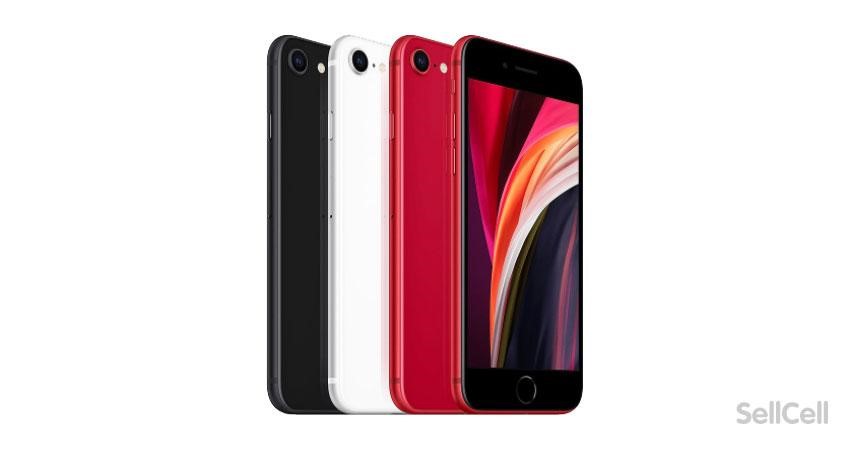 In terms of design, the new iPhone SE is reminiscent of the iPhone 8, launched back in late 2017, featuring a glass sandwich design with front and rear glass blending seamlessly with aluminum edges. Unlike the recent models, it has a sizeable amount of bezels on the top and bottom of the display, and the bottom bezel houses the signature home button that also doubles as the Touch ID fingerprint sensor.

On the front, there is a 4.7-inch LCD ‘Retina HD’ screen with a 750 x 1334 pixels display resolution, offering 326 pixels per inch (PPI). And, just like the latest iPhone flagships, the screen on this model is also equipped with Haptic Touch technology, meaning it is capable of registering long presses to provide you with shortcut options based on the interface or the app you’re using.

Under the hood, it shares a lot of similarities with Apple’s recent iPhone 11 flagship series, including the Apple A13 Bionic processor. The A13 Bionic is Apple’s latest and most powerful processor to date, and it can seamlessly run any high-end app or game you throw at it with great ease. The chipset has even managed to beat Qualcomm’s flagship Snapdragon 865 chipset, which powers pretty much all Android flagship handsets, in every processor benchmarking platform, including GeekBench 5.

The powerful A13 Bionic Hexa-core processor paired with quad-core GPU takes care of the intense graphical and processing needs of the iPhone. The rest of the hardware specs of the iPhone SE 2020 include 3GB RAM, 12MP rear camera, 7MP front-facing camera, and 1821mAh battery that supports fast charging (50% in 30 mins). The device runs Apple’s latest operating system software iOS 13 out of the box.

Obviously, you don’t get Apple’s advanced face recognition feature called Face ID on the iPhone SE, as its front camera is not as complicated as iPhone X or any of the later models. But instead, you do get the good ol’ Touch ID feature, which lets you unlock your iPhone and authenticate transactions using your fingerprint. Wireless charging (thanks to the glass rear), fast charging, and IP67 water-and-dust-resistance are some of the impressive additions on the new affordable iPhone, that weren’t available on its predecessor.

Should you buy the new budget iPhone?

New reports on most traded-in phones

It comes as no surprise that trade-in sales on our platform have seen a massive spike since the launch of the new iPhone SE. Many people are selling their old handsets, including 2019 models, to save big on the new Apple phone in the market. Our table below shows that once you have traded in your old phone, you may not have to stump up as much as you think to get the new SE, in some cases the money from the trade-in will cover the new SE and also give you a little extra leftover.

Check out the latest list of top 15 traded-in devices of the past month and also take a look at how much you would have to put towards a new iPhone SE once you have sold it through SellCell.  Not as much as you think. And nothing in some cases.

As you can see from the above list, 13 out of 15 top traded-in phones are one or another iPhone model, meaning Apple fans can’t wait to swap the older models for the newer, more powerful one launched a week ago. Apple is the least depreciating brand in the smartphone market, so users can still get top dollars on their used devices. 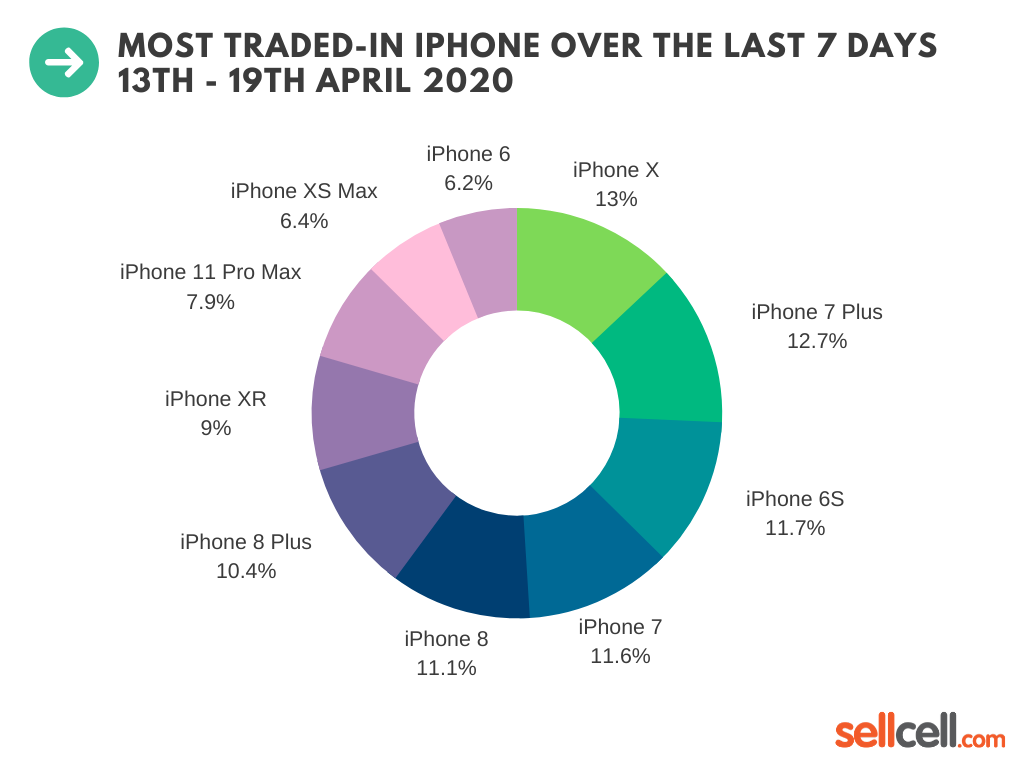 The iPhone X is one of the most popular traded in iPhones of the last month and as the chart above shows, the most frequently traded in iPhone in the last 7 days. The user would only have to put around $50 to bag the new SE…after trading in their iPhone X. Maybe why there is such a trade-in influx?

Trade-in and save big on iPhone SE

If you are on a savings spree or don’t have enough to pay upfront for the new iPhone SE, then trade-in might be a good fit for you. Trading in your old device could cover most of the costs of a new handset, and in some cases, it could cover the costs in full and still leave you with quite a bit of cash.

However, it is worth noting that there are a lot of buyback companies out there, and not all of them pay out what your device is actually worth. For instance, an earlier report has revealed that trading in through a cell phone carrier could mean up to 80% less cash. But don’t worry, this is where SellCell comes in handy.

SellCell’s price comparison tool ensures that you always get the best price for your smartphone, tablet, and other gadgets. We compare the deals from a deluge of buyback services from the likes of Gazelle, Decluttr, BuyBackWorld, ItsWorthMore, and many more, to tell you which one offers the maximum price for the device in question. Note that all our buyback partners are operating during the lockdown and the best part — you don’t even have to step out of the house to send the devices.

The launch of a new affordable iPhone may have come as a shock to those who recently bought an older, more expensive iPhone or Android phone — thereby exhausting a majority of their savings. Well, if you’re one of them, you can put aside your buyer’s remorse and sell the device through SellCell for a good deal of money. This way, you could buy an iPhone SE and still have some money left over to load up your emergency funds for tackling the COVID-19 crisis.

Here is a countdown of the best trade-in deals that will leave you with some cash after buying a new iPhone SE. 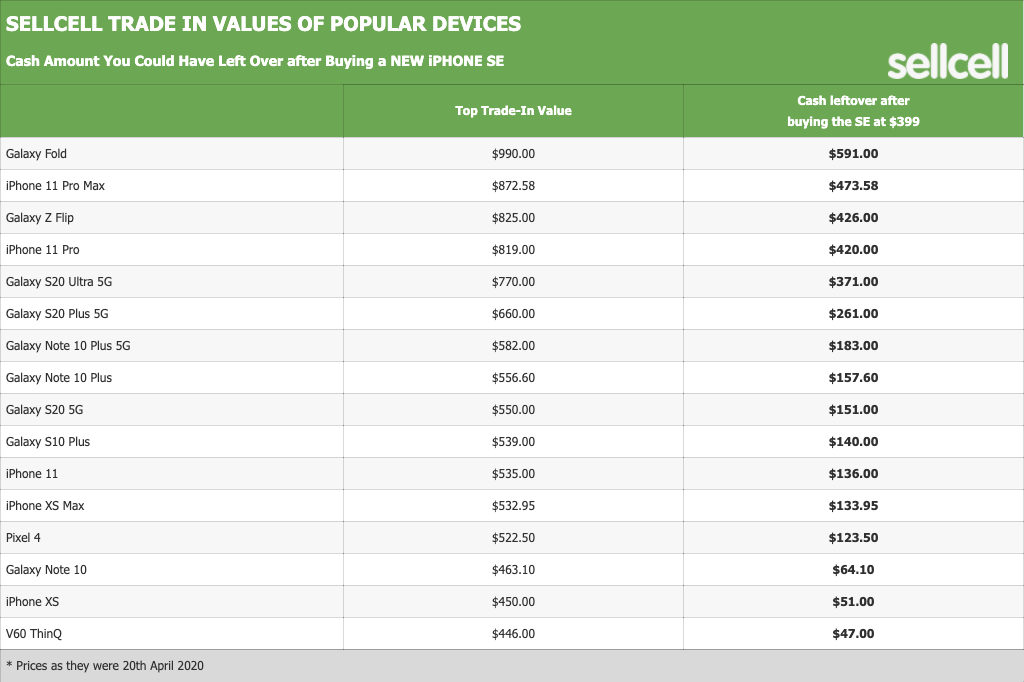 A great benefit about trading in your old phone is that you potentially could afford to buy the SE outright.  This means that you can also then benefit from a very cheap SIM only deal which can cost around only $15 per month!

The iPhone SE 2020 is a great compact phone to have if you are on a budget. The USP of the model is that it packs all the goodies you’d expect to see in a high-end iPhone, including flagship hardware, wireless charging, and IP67 rating, for less than half the price. And as an icing on the cake, there are great trade-in deals that could get the price lowered further.

Apple, along with Best Buy and Walmart, are taking pre-orders for the new budget iPhone, and the pricing details are as follows: