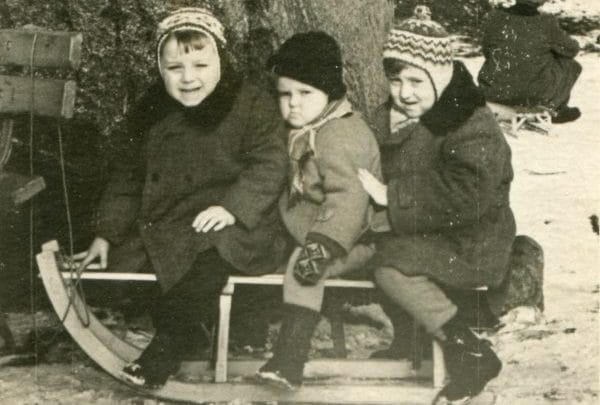 I love the taste of snow.  Look at it snow!

Lewis won’t go anywhere in snow, Mom has to drive him.  “I can’t wait till I have my driver’s license!”  He just thinks he knows how to drive and knowing how to drive means he’s not supposed to have to walk anywhere.  And Gary hates snow because Dad bought a kiddy-size shovel, Gary’s supposed to help and he’d rather stay inside and watch TV.

I remember—last winter Dad snuck us in to a golf course.  Well, the fence was mostly bending down, there were lots of people already inside, it wasn’t really a snuck-us-in then, was it?

And Dad and Lewis lifted our toboggan through.  And we walked through the snow to where everybody was going and the hills were pretty steep.  “Here,” Dad said.  “And stay away from those trees.”

“But the snow’s deeper over there,” Lewis pointed.

“Too close to the trees.”

Lewis is sort of a bossy-knowy, and Gary’s sort of show-me-prove-it.  When the three of us are all together playing something I probably only mostly watch, you know, to see who’s going to win.  Not how or what but who says they won the game the longest loudest.  Monopoly’s all right if both of them are playing but otherwise I end up with none of the fake money and all the green houses that Gary only lets me make a town on the GO square with while he’s got one big red house on most of the others.  But when it’s just Lewis playing he’s always the banker and I don’t understand.

Daddy’s up with the other people talking about golf, Lewis says.  “I’m in charge.”  That means he gets to sit in the front.  “Now, listen to me very carefully.  The way to steer a toboggan, if you want to go to the left, you lean to the left.”  And he says this twice, and twice Gary shakes his head and says, “No, that’s not the way!”

We go down the hill, and down the hill again, and they won’t let me ride going back up hill but the rope’s not big enough for me to pull, too, so it’s okay.  Wow!  Some of the sleds and kids coming down, you really don’t know which way they’re going because about halfway down is a bump, a little hill in the side of the big hill, and it’s frozen solid—I can’t walk across it without falling—and when the sleds get to that spot—Weeeee-zippee!  No matter what direction they start, it’s the way they come out of that bump that makes them go way off course, left or right or sideways even turning over.  It’s the fun of it.

“We should avoid that spot,” Lewis says.

“But otherwise we’ll be in the trees,” Gary says.

“Well, we should try to stay on one side of it.”

Up the hill and down again, up and down, and then, they’re loaded up for another run.  I’m supposed to push them loose and then hop on the back at the last second, but this time they’re too far back.  I mean, Lewis and Gary are sitting first and second and all the way up, it’s that the toboggan is too far back on the top of the hill.  I can’t make it budge.

Gary shoves his stocking cap up from off his nose and eyes and looks at me.  “What a baby!  All you have to do is push.”

And I push and push and it won’t budge an inch and they won’t get off and help and it doesn’t move until they wiggle, and the toboggan rocks side to side and then we’re up far enough and suddenly it starts to move—and really move—and I have to run to catch it and I hop on.  I hop on and I sort of tip backwards and somehow I get my legs in front of me, I sit with my legs crossed behind Gary, I try to hang on to Gary’s back but his jacket’s pretty thick, it’s really tricky hanging on.

Oh, I didn’t tell you, at the top of the hill while Lewis wasn’t looking Gary told me, “If you want to go left, you lean to the right—I’ve seen ‘em do it, he doesn’t know what he’s talking about.”  Well—neither do I because I didn’t even think about leaning anywhere all this time when we go crazy-wazy fast down the huge hill all I do is hang on to Gary who’s hanging on to Lewis and feel like I’m going to fall off.  Lean?  My head is already pointed sort of down.

Like we’re going down again, and fast, and we get to the little hill on the side of the big hill and slide across and start to spin, I’m holding my breath, the air’s so cold it hurts the inside of my nose though—

“No!” Lewis cries out.  He’s in front, he usually yells WEEEE.

“What?” Gary’s behind him with his hat over his eyes and his gloves too thick to push it up now.

I try to lean to the left but Gary’s thrown off one glove, he’s flipped off his hat, he’s yelling too, “NO!  I told you—if you want to—”  And Gary leans to the right.  He almost knocks me off.

Lewis leaning left, Gary leaning right, what am I supposed to do?  I sit perfectly straight, I think I’m the smallest, it won’t make any difference.  But—the tree!  I try to go from sitting to kneeling to be ready to—I don’t know what—but my foot slips off the toboggan’s edge, grabs the ground and spins me around, and next I’m rolling like a log down the hillside sideways—that’s how fast we’re going.

BANG!  Right smacko-dabo into the tree.  When I stop rolling and come over to look, wow!  The front of the sled’s cracked wide open like fingers spread out.  And Lewis is swearing and Gary—there he is, still rolling farther down.

I look at him.

“Did you lean to the left?”

I feel my eyebrows go up and it’s so cold it feels like they stay there.  But I don’t say anything.