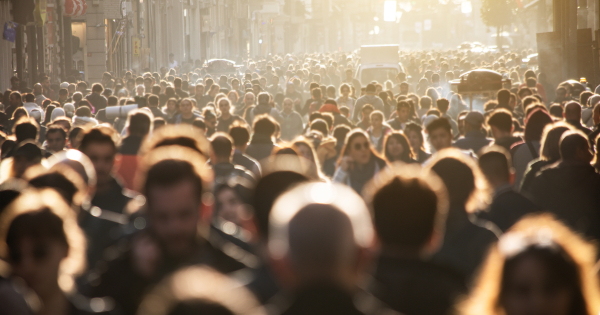 ‍More than half of the world’s population now lives in cities, and the proportion could reach 70% by the middle of the century. Cities are a frontier zone between actors from different worlds and have a crucial role in the fight against climate change. Cities are where we can make change happen.

Joke Quintens, former deputy mayor of the city of Genk in Belgium, now experiments with new forms of participation and ways to accelerate transitions in cities.She founded the Living Lab MovingMarseille. We met her at the Grand Barouf 2019 in Lille, France where she gave a workshop on the topic “Wetopia – Making cities together”, an inspiring session on design, democracy and our role in the society.

Climate crisis, the global shift to the political right, technological innovation, new qualities of (dis)connectedness, new global movements like extinction rebellion and Fridays for Future – we find ourselves in a moment in time where the challenges humanity is facing are more pressing than ever. What does activism of the 21st century look like?

For me, activism in the 21st century is not waiting for politicians to change something but to change it yourself.

This doesn’t mean following the neoliberal idea that governments hand over the responsibility to solve problems to the people – we need strong politics AND a strong civil society.

Wetopia is a term I use to refer to activism targeted at changing cities together. It is not a utopia, because it is happening and it is not a fixed methodology, but an attitude.

When I was a politician, I learned that people expected me to implement things because they voted for me. It doesn’t work this way, as a politician you are a citizen too.

You can’t do it alone, real change only happens when you bring everyone to the table in their different roles as activists, artists, politicians, city makers, civil servants, entrepreneurs, marginalized groups. And act. New alliances often accelerate great change.

How can we achieve social innovation and how can we make it scale?

I believe the next big thing will be a lot of small things.

There is a difference between Wetopia and the way big institutions and power brokers achieve impact. Of course you can scale if you have lots of resources. Wetopia can be scaled and become a movement when a lot of people just do it.

Can you give some examples? How can we leverage new collaborations and alliances?

An example of scaling up is Samentuinen, a community garden project that started in Genk, Belgium. Genk is a mining city that usually doesn’t see a high level of of participation. One day I got approached by two men from a neighbourhood of retired, mostly Turkish and Italian miners, who asked if they could use an unused piece of land in the middle of their neighborhood to create a learning garden to plant tomatoes and zucchini. As it was owned by the city, we could give it to them for ten years and what they have created is an amazing garden and community meeting space. In the last few years, hundreds of these gardens have sprung up. Thanks to this small project, there is a movement of learning gardens across Flanders in north of Belgium today.

An example of new alliances with great impact is Coco Velten in Marseille and Les Grand Voisins in Paris. These projects, set up by Yes We Camp are fighting homelessness by occupying temporary public buildings legally to shelter people, to give room to entrepreneurs, to develop activities on site like growing plants to disseminate in the neighborhood, to green the streets. Together activists, entrepreneurs, citizens, homeless people are able to create a new ecosystem.

Sharing these examples is essential to activate people. Talking about them, showcasing how it can work, how everyone can do something and how connecting with other people and initiatives is powerful and fulfilling. Match-making plays another important part. Seeing potential, bringing people together and setting up meetings, field trips and exchanges.

As you know Ouishare is developing a new community and working space in the north of Marseille. What role do new types of civic spaces play?‍

Civic spaces are accelerating change-making. The place-making community is a growing movement of people developing cities and neighbourhoods. Their philosophy is different from institutions that set up spaces in an area and stay isolated from the people and activities around, even after years and sometimes end up becoming players of gentrification. Place-making is about helping to develop a neighbourhood and ask the people around what’s in it for them.

Ouishare has a very unique position between institutions and civil society, it is connected to the grassroots but is also taken seriously by political players. The neighborhood of the (Marseille) project is promising, but still poor and challenging. Most coworking spaces are closed things, what Ouishare is aiming to develop is something different. I am really looking forward and I want to support the local team in making connections with the local ecosystem like the local flea market Les Puces, Ici Marseille, Le Carburateur, Cap au Nord Entreprendre and associations, and doing so, with the citizens. The space is amazing and it is also a Wetopia as the building is owned by an enterprise that opened it to be used and developed. It is a win-win situation because that way they attract people and create connections with the neighborhood.

What is the role of policy makers in this? How to best approach them and collaborate with them?

This really depends on the country. When I compare Belgium and France, they couldn’t be more different. The political systems are different. In Belgium, we have an obligation to vote and proportional representation which in general requires coalition governments. France is a representative democracy, the winner takes it all and the voter turnout might only be 20%. While in Marseille it can feel like policymakers are on another planet and I see a lot of clientelism, in Genk you would meet people and talk with them on the street and our office doors were always open.

In general I would say, don’t wait for politicians to do something, we don’t need them to create change.

But also, don’t see politicians as the enemy. I really believe in collaboration over antagonizing. We all have multiple roles, politicians and citizens, we need to respect each other’s worlds.

A great example for this is the Grand Barouf Numérique, a collaboration between the Metropole of Lille and Ouishare.

And my message to politicians is, don’t touch all those bottom-up initiatives. When you like a project, support it but don’t take it over, don’t make a city project out of it.

Real change happens from the bottom-up, the people need to own their own projects.

Why did you choose cities as the scope for your work? What role can they play in the future you imagine?

Most of the population lives in cities and urban neighborhoods are microcosms of living together. In his book “If mayors ruled the world” Benjamin Barber wrote about the power of municipalities to implement change from an US perspective. A mayor of a big city might end up having a bigger influence than a minister. Local mayors in the US decided to raise the minimum wage when the one proposed by the state seemed insufficient and the mayor of Pittsburgh decided to hold up Paris climate agreements.

The city is where we can decide to plant or cut trees, support alternative energies and decide to keep open spaces. They are where the real change happens, not on a national level, that is what I see in practice.

‍The projects we work on impact people’s lives and our future in ways we might not be able to see. How can we be conscious in our activism? ‍

When we work in a Wetopian way, we don’t talk about people but let people talk about what they do and want to see. We give the floor to them to develop the things themselves and use their knowledge, creativity and engagement. We create connections, use matchmaking and create new alliances while avoiding polarization and power games. Whether you are an artist, a pensioner, an entrepreneur, you can make a change for the common good and you don’t have to invent things or do them on your own. Collaborative, small-scale actions that connect both worlds, the grassroots and the political sphere, are where innovation and sustainable change making can happen.

This post was previously published on Ouishare and is republished here with a Creative Commons License.