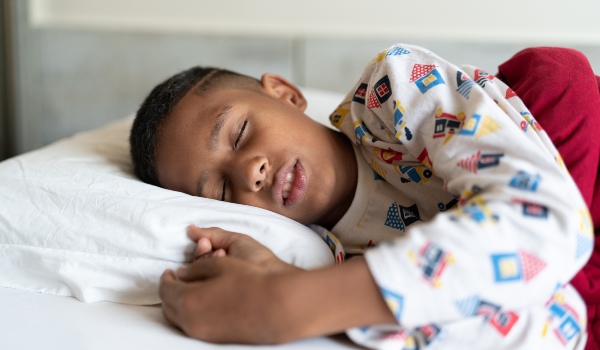 “Using a passive light therapy during sleep, we can help teens get an extra 43 minutes of sleep every single night,” says senior author Jamie Zeitzer, associate professor of psychiatry and behavioral sciences at Stanford University.

Zeitzer’s previous research on jet lag showed that exposure to short flashes of light can trick the brain into adjusting to a new time zone, even during sleep.

Chronic sleep deprivation is common in teenagers, Zeitzer says. The body’s circadian clock, which controls daily rhythms of when we sleep and when we’re awake, is naturally set later in teens than in children or in adults, meaning that teens often don’t feel sleepy until late at night.

Teens might also stay up late because of such social influences as homework and using electronic devices. Early school start times often require them to wake up before they’re fully rested, further contributing to sleep deprivation.

Prior studies tested whether cognitive behavioral therapy alone could help teens go to sleep earlier. Successes were modest: After the treatments, teens went to sleep 10 to 15 minutes sooner, on average. But these interventions might have put participants at odds with their own body clocks, asking them to try to fall asleep before they were tired, a behavior that is difficult to sustain, Zeitzer says.

“We have a biological drive to stay awake in the hours before we normally go to sleep,” he says. “So our team wondered if we could adjust the circadian timing, having the teens essentially move their brains to Denver while they’re living in California.”

In the first four-week portion of the new study, researchers tested light therapy alone in a group of 72 teenagers. For four weeks, they exposed half the participants to the frequent brief light flashes during the final three hours of their normal sleep period. The remaining participants received a sham light therapy treatment, consisting of three bright flashes of light per hour—too little to reset their body clocks.

Although the light therapy caused the exposed teens to feel more tired earlier at night, they still stayed up late. Using the light alone was not enough to increase the amount of time they slept.

“We had to convince teens to try to go to sleep earlier,” Zeitzer says.

So, in the second four-week phase of the study, researchers recruited 30 teens; half of them received light therapy during their final two hours of sleep, and half had sham light therapy.

But in this phase of the study, all of the teens also participated in four one-hour sessions of cognitive behavioral therapy to encourage them to go to sleep earlier.

NOT A SLEEP AID

Therapists worked with each teen to identify areas of their lives they cared about that would be better if they had more sleep—such as academics, physical appearance, or athletic performance—and used these to help motivate the teens.

The cognitive behavioral therapy also included giving them information about the body clock, sleep hygiene, and strategies for waking up earlier on weekends.

Prior studies of light therapy for resetting the circadian clock showed that the early morning flashes of light must continue daily to be effective, Zeitzer says.

“The cool part, for an intervention teens would potentially have to live with for years, is that it is completely passive. We set up the flashing light in the person’s bedroom and put it on a timer; they don’t have to wear a device, remember to turn it on, or do anything else.”

The flashing light used in the study was a programmable bridge beacon; it is not marketed as a sleep aid, Zeitzer says.

The next step, he says, is to figure out the best way to deliver brief cognitive behavioral therapy for improving sleep duration to large numbers of people.

The paper appears in JAMA Network Open. Additional coauthors are from Stanford and from Palo Alto University. Stanford University holds a patent on the light therapy technique for resetting the body clock.

A version of this post was previously published on futurity.org and is republished here with permission from the author.