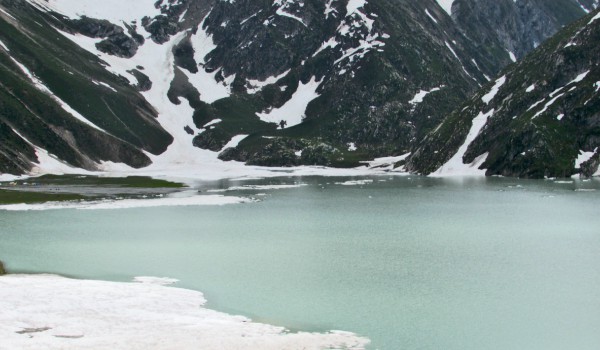 LONDON, 20 June, 2019 − The Himalayan melt rate is now thawing glaciers on whose water many millions of lives depend twice as fast as just four decades ago, researchers say. One scientist thinks the glaciers may have lost a quarter of their mass in the last 40 years.

A new, comprehensive study shows the glaciers’ melting, caused by rising temperatures, has accelerated significantly since the turn of the century. The study, which draws on 40 years of satellite observations across India, China, Nepal and Bhutan, shows the glaciers have been losing the equivalent of more than 20 inches (about half a metre) of ice each year since 2000, twice the amount of melting recorded from 1975 to 2000.

The study, published in the journal Science Advances, is the latest to show the threat that climate change represents to the water supplies of hundreds of millions of people living downstream across much of Asia.

“This is the clearest picture yet of how fast Himalayan glaciers are melting over this time interval, and why,” said the lead author, Joshua Maurer, a Ph D candidate at Columbia University’s Lamont-Doherty Earth Observatory. While not specifically calculated in the study, the glaciers may have lost as much as a quarter of their mass over the last four decades, he said.

With around 600 billion tons of ice today, the Himalayas are sometimes called the Earth’s third pole. Many recent studies have suggested that the glaciers are dwindling, including one in February this year projecting that up to two-thirds of the current ice cover could be gone by 2100.

Until now, though, observations have usually focused on individual glaciers or specific regions, or on shorter lengths of time, and have sometimes produced contradictory results, on both the degree of ice loss and its causes. The new study incorporates data from across the region, stretching from early satellite observations to the present.

This shows the melting is consistent over time and in different areas, and that rising temperatures are to blame: they vary from place to place, but from 2000 to 2016 they have averaged 1°C (1.8°F) higher than those from 1975 to 2000.

Maurer and his co-authors analysed repeat satellite images of about 650 glaciers spanning 2,000 kilometres. Many of the 20th-century observations came from recently declassified photographic images taken by US spy satellites.

The researchers created an automated system to turn these into three-dimensional models that could show the changing elevations of glaciers over time. They then compared these images with post-2000 optical data from more sophisticated satellites, which show elevation changes more directly.

“This is the clearest picture yet of how fast Himalayan glaciers are melting over this time interval, and why”

They found that from 1975 to 2000, glaciers across the region lost an average of about 0.25 metres (10 inches) of ice each year in the face of slight warming. Following a more pronounced warming trend which started in the 1990s, from 2000 the loss accelerated to about half a metre annually.

Recent yearly losses have averaged about 8 billion tons of water, Maurer says. On most glaciers the melting has been concentrated mainly at lower elevations, where some ice surfaces are losing as much as 5 metres (16 feet) a year.

Despite suggestions that changes in precipitation, or increasing deposits of soot from growing fossil fuel burning in Asia, might be affecting the glaciers rather than climate heating, Maurer believes rising temperature is the main cause of the melting.

“It looks just like what we would expect if warming were the dominant driver of ice loss,” he said. At least one recent study has found a similar process at work in Alaska.

Ice loss in the Himalayas resembles the much more closely studied European Alps, where temperatures started going up a little earlier, in the 1980s. Glaciers there began melting soon after that, and rapid ice loss has continued since. The Himalayas are generally not melting as fast as the Alps, but their changes are similar, the researchers say.

Their study does not include the huge adjoining ranges of high-mountain Asia such as the Pamir, Hindu Kush or Tian Shan, but other studies suggest similar melting is under way there as well.

About 800 million people depend in part on seasonal runoff from Himalayan glaciers for irrigation, hydropower and drinking water. The faster melting appears so far to be increasing runoff during warm seasons, but scientists think this will slow within decades as the glaciers lose mass, eventually leading to water shortages.

In many high mountain areas meltwater lakes are building up rapidly behind natural dams of rocky debris, threatening downstream communities with outburst floods. On Everest, the long-lost bodies of climbers who failed to return from the summits are emerging from the melting ice. − Climate News Network