The opportunity entertainment provides, to get lost in another environment, if only for a little while, can be a very important way to cope in these extremely trying times. Any joy seems like something to grasp and hold onto, now, more than ever. However, with live theater on hold, I didn’t think I would be able to review anything for you, for quite some time. Then, the opportunity to review the movie: “Hidden Orchard Mysteries: The Case of the Air B&B Robbery” arrived, and I was eager (ecstatic really) to watch this film and report back to you. 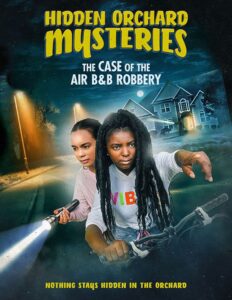 So, let’s get lost in the world of “Hidden Orchard” for a bit. If you are anything like me, you enjoy a good mystery—something to chew on, something to solve. This film is a little bit in the genre of the Nancy Drew mysteries—in that the “detectives” are young women—young teen girls, in this case. Actresses Gabriella Pastore (Gabby) and Ja’ness Tate (Lulu) are best friends, self-appointed “detectives” willing to stop at nothing to solve a case. Early on, Lulu’s mom tells the girls: “… Sometimes the best adventure can be right up underneath your noses…. Not everything around “The Orchard” is as simple as it seems…” (Truer words were never spoken….)

The affluent community they live in, “Hidden Orchard” is surrounded by a few Air B&Bs, all of which have experienced recent break-ins. Just as their neighbors, the Parkers, who live inside “The Orchard”, were about to turn their expansive home into an Air B&B, they are robbed, too. With Gabby’s photographic memory, and Lulu’s gut-instincts—she can easily spot a liar–the two set out to uncover who is responsible. Together, they are an endearing and unstoppable sleuthing team. The girls “interrogate” their suspects, relying on the fact that adults see kids “just as kids” and often underestimate them. (A theme that definitely appeals to children.) Gabby and Lulu make the most of the leads they uncover, following them wherever they take them: to the local library, a neighborhood cupcake shop, even a dip in a dumpster. Pastore and Tate are very convincing as best friends—the kind that finish each other’s sentences, ride together on one bike—share secret handshakes. 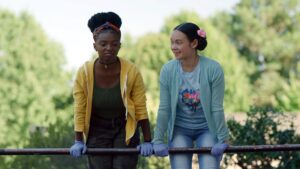 Lulu (Ja’ness Tate) and Gabby (Gabriella Pastore) about to dive in for evidence.

“Hidden Orchard” is a close-knit community, so the girls start ticking off the likely suspects from a small pool of neighbors and community members. Is the gardener, Mr. Sanchez who has access to everyone’s home—guilty? Or the busybody Mrs. Jones, the HOA president who vehemently didn’t want an Air B&B in The Orchard? Or is the troubled teen, once “Dean”, now called “Dai Dai”, somehow responsible? Why do the Parkers themselves seem a bit suspicious? What about the “crazy rich” Mr. Patricks, the owner of many of the Air B&Bs around town, could he be involved? Other than the girls themselves, and their parents (Lulu’s single mom and Gabby’s dad and his new wife) everyone else seems a suspect.

The mystery itself moves along at a nice pace and held my interest. There’s one part near the end where the actual culprit becomes suspicious of the girls, and we see the film pivot as the story is told from the culprit’s viewpoint. This was interesting. On the whole, this film reminded me a bit of watching those ABC Afterschool specials I once enjoyed as a child. I appreciated the very diverse cast, and the most fun to watch, besides the main leads, were the feisty cupcake shop owners as fun comic-relief, Gabby’s new step-mom (a former detective herself) and Lulu’s mom (spirited). 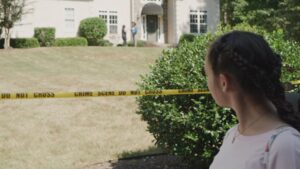 This film had potential, and I wish I could fully recommend it, but, where this production falters for me, is in the category of “family-friendly”. There was mild language and inappropriate slang throughout, and mature themes: there is a pot-smoking/growing mom (this did nothing to further the plot), an affair at the very heart of the mystery, and a gun scene at the end, which seemed a bit like “jumping the shark”. Had these elements been limited or removed, I would be more apt to recommend this film as “family-friendly”.

Of course, “family-friendly” is a wide category as parents make their own choices as to what is deemed “appropriate”. (Any time spent on “Common Sense Media” will reveal a wide array of opinions on this topic.) For my family, this film wouldn’t have been appropriate for my 10-year-old son, and although fine for my 16-year-old son, I don’t think it would have held his attention.

So, even though it held my interest and there was something truly endearing about the relationship between the two lead actors –I can’t fully endorse it as a family-friendly film. This is a shame because it offered a very diverse cast, including two talented young actors.

Director/Story and Screenplay by: Brian Shackelford

Can Be Pre-ordered Here: