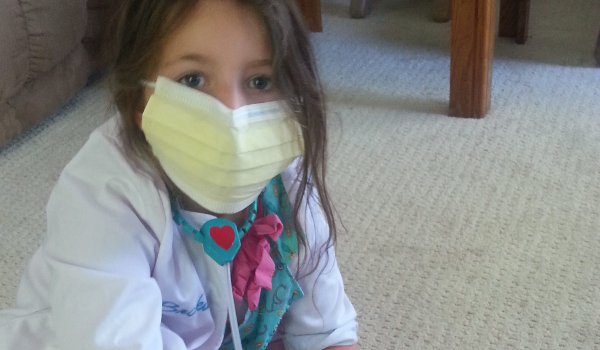 The United States has a doctor problem. According to the Association of American Medical Colleges, there is a projected shortage of 60-90,000 physicians by the year 2025. This comes at a time when demand is expected to grow by 11-17% as the population continues to grow and live longer. In the next ten years the number of people over the age of sixty-five in this country is expected to go up 40-45%, but a full 1/3 of practicing physicians are right now also over fifty-five.

As the father of an intelligent, motivated, compassionate young girl, I appear to be in the perfect position to help rectify this situation. She’s been giving people “check ups” and caring for sick dolls since she was little. A working stethoscope, an anatomy coloring book, and we can begin career preparation.

Her aversion to blood is a potential problem. She has no problem squishing bugs until their guts squirt out, but the slightest cut or scrape and she is completely freaked out. A hangnail extraction that didn’t go as planned elicited a response usually reserved for traumatic amputation.

The other problem is that I know lots of doctors and I know about their level of job satisfaction. That they average fourteen years of schooling and graduate with an average debt of $170,000. With malpractice insurance rising to almost $250,000 a year for most surgeons and specialists, it’s not nearly the lucrative, rewarding career that it once was.

Perhaps Law School would be a better option. That’s only seven years post high school. She likes books, likes to argue. We could add some legal tomes to her summer reading list.

Except that they also have extremely low job satisfaction. With an over-saturated job market, the American Bar Association says that only 71% of 2014 graduates now have full time employment. Add in declining salaries for those that do find work, and I guess we can cross that off the list.

Waylon Jennings and Willie Nelson told us not to let our babies grow up to be cowboys. Not to let ’em pick guitars and drive them old trucks. To let ’em be doctors and lawyers and such. As much as I’d hate to disagree with these great American philosophers, being a cowboy is starting to look pretty good these days.

To worry about any of this now is of course absurd. She has plenty of time to decide what she wants to do with her life and will change her mind several times before it’s all said and done. I know that her potential for greatness is there and that I will support and encourage whatever she chooses. If superhero ballerina is the best that we can come up with, we’ll make it work.

—
This post was previously published on ThirstyDaddy and is republished here with permission form the author.
—