I don’t believe that a trigger warning should be required before posting this picture from a few years ago. 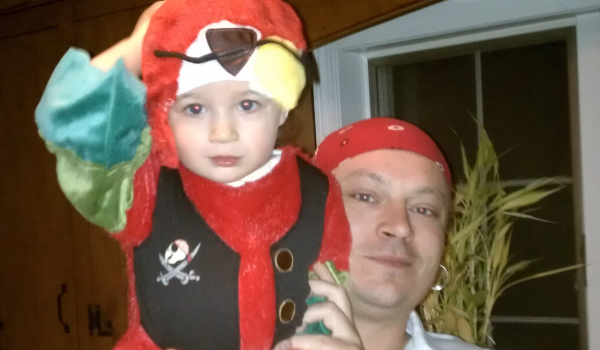 One of the recurring themes I find myself revisiting as I write about my experiences raising girls is my belief in letting them be whoever they want to be, to resist outside influence and gender stereotypes while at the same time trying not to devalue femininity. To teach my girls that it is OK to wear pink and dress like a princess when they want to, but also that there is no reason why they can’t be a knight as well.

I spend a lot of time reading, both on-line and off, and recently came across an article about the appropriateness of certain costumes for children, fully expecting it to be about the over-sexualization of costumes for little girls and issues with little boy’s costumes being too violent and gory. I figured I’d probably agree with some points, find a few others to be over-reactionary and move on to whatever I found next that appeared potentially interesting.

Instead I was presented with hyperbolic nonsense, a perfect rebuttal to my piece defending political correctness . It took multiple readings before I was positive that it wasn’t intended to be satirical. The author started by calling out Indian costumes as racist, an opinion I can agree with, lost me when she said military and policemen costumes promoted violence, and completely went off the rails by saying superheros were ableist and pirates promoted rape culture.

I’m aware that Captain Hook is no more representative of actual historical piracy than Hagar the Horrible is of the Vikings, but I don’t believe that a trigger warning should be required before posting this picture from a few years ago.

This isn’t to say that reasonable conversations about children’s costumes and cultural appropriation are completely irrelevant. I don’t think an Asian household would be offended by a gaggle of ninjas knocking on their door, but I can’t help but cringe at store displays full of war bonnets and tomahawks, afro wigs and fake gold chains.

Last year my daughter was Captain America and I was proud of the fact that no reason ever occurred to her about why she shouldn’t be. It wouldn’t have surprised me at all if this year she had chosen Iron Man or Black Widow. But what if it had been Falcon or Black Panther? Her favorite X-Man is Storm and her weather powers. Would that still have been OK?

I believe it would be fine. A recent conversation in a Dad Bloggers Facebook group quickly brushing aside any doubts and instead turning towards the celebration of the fact that there are now so many non-white characters that children have to emulate.

In the end we settled on a Punk Rock Vampire costume. Here at Thirsty Daddy we in no way endorse achieving immortality through the consumption of another’s hemoglobin. We apologize in advance to any persons, living or undead, who may take offence.