We made out annual mall pilgrimage this past week, our December visit with none other than the big man himself, Father Christmas. 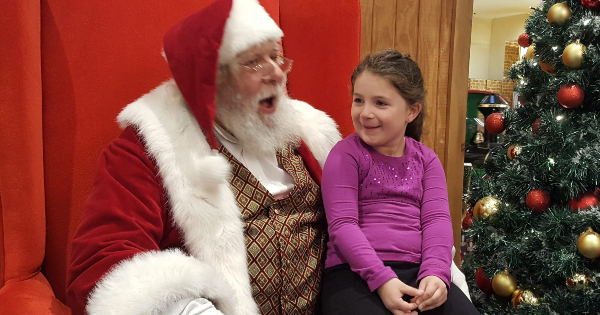 We made out annual mall pilgrimage this past week, our December visit with none other than the big man himself, Father Christmas. Thirty minutes of waiting in line while other parents tried to coax smiles out of terrified toddlers, twenty five bucks for a pair of 5 x 7 pictures that came out about half as well as the ones I snapped on my phone, and a surprise for both Santa and daddy as she announced that they only thing she really wanted was a monster video game full of zombies for her to fight.

Photo op completed, we set off for the real reason she was so excited upon realizing where we were headed. The escalators at Sears. “Magic stairs” that we rode up and down many more times than I’m comfortable admitting, but apparently extremely entertaining for the woman watching from the perfume counter.

It isn’t that she wasn’t happy about seeing The Jolly One. She was thrilled to be able to pass along her last minute request and is always up for having her picture taken. She’s just not impressed with meeting another one of Santa’s helpers trying to fool her into thinking they are the real deal. The Salvation Army Santa outside of the grocery store and the Biker Santa holding a food drive outside of the liquor store didn’t impress her much either. She still believes in Santa Clause, just not these “lame” Santa wannabes.

The Santa Claus around here is a bit different, the product of an over active imagination ( mine ) and a growing amount of skepticism ( hers ).

Our Santa is a little more badass than the one you may be used to hearing about. Yes, he still delivers presents every year, and yes, you still have to be well-behaved to receive them. I’d be crazy to take that part out. It’s what he does the other 364 days a year where we go off script a little bit. Our Santa spends those days fighting bad guys, saving village children from the evil Krampus and his gang.

He still uses some magic, pixie dust supplied by the elves helps him fly, and of course he has cold powers for freezing enemies. Super speed is necessary to get around the entire world in one night, though I’m not sure how big she thinks the entire world actually is.

He’s also very technologically advanced. A button on his belt buckle using the same Pym Particles that Ant-Man uses to shrink. This enables him to sneak into houses without chimneys and to help him get down chimneys without getting his suit dirty. His indestructible suit, made of Vibranium like that worn by The Black Panther. Naturally, Iron Man helped with the rockets that power his sleigh.

It’s all a bit silly and it’s possible I got carried away, but she keeps asking questions and I answer the best I can. I’ve heard all of the arguments against lying to your children about Santa Claus and I think they are all bollocks. The percentage of our lives that we spend as children is terribly short, the time spent as innocent, imaginative children even shorter. Whatever I can do to extend that time, extend her belief in magic and elves and a secret headquarters at the North Pole, then that’s what I’m going to do.