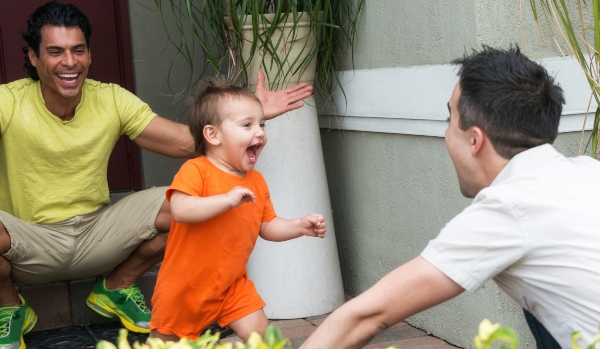 The researchers found that a more important influence on adopted children is how the family manages conflicts, whatever the parents’ sexual orientation.

The researchers filmed and coded a 10-minute full family discussion (including other siblings, if any) about a recent conflict with the child. Across both same-sex and heterosexual parents, they found that better “cohesiveness” – the way the family works together to resolve a conflict – correlated with the parents’ report of better behavior on the part of the child. This corroborates much other family research showing that children do better when there is less conflict in the family. Some of these other studies have also observed whole families interacting when measuring conflict management, though few have included adoptive parents.

Similarly, the researchers found correlations between better family functioning – more cohesiveness (as above), less negativity in family interactions and more positivity – and more positive reports by the children regarding their feelings about the adoption. This too is in line with earlier research showing that children feel better about their adoption when their families are more responsive and supportive.

The children’s age and gender and whether the adoptive parents were separated made no difference in the findings, on average.

The study involved 96 families of adopted children (48 boys and 48 girls) aged between 5 and 12 years old. Twenty-six sets of parents were mother-mother, 29 father-father, and 41 mother-father. Forty-six percent of the adoptions were transracial, and the families’ average socioeconomic status was high.

Overall, families with same-sex parents scored highly for cohesiveness and positivity and moderately for negativity. The behavior of the children was below clinical problem levels, and overall the children were positive about adoption.

The family discussions were assessed for power-wielding versus power-sharing dynamics that characterise discussions about resolving conflict. Negativity and positivity in interactions, including tone and body language, were also scored.

The children’s behaviour was assessed by asking both parents, using a questionnaire covering things like disobedience, getting into fights and cheating. The children’s thoughts about adoption were assessed by asking them to complete a questionnaire that explored their positive feelings, negative feelings and their “preoccupation with adoption” (e.g., “How often do you think about adoption?” “How often do you think about your mother?”).

The results of this study confirm earlier research that shows children adopted by same-sex parents do as well as those adopted by heterosexual parents, irrespective of the different parenting practices that are often seen in same-sex couples. These families may demonstrate unique strengths in family communication as well as resilience in the face of social stigma.