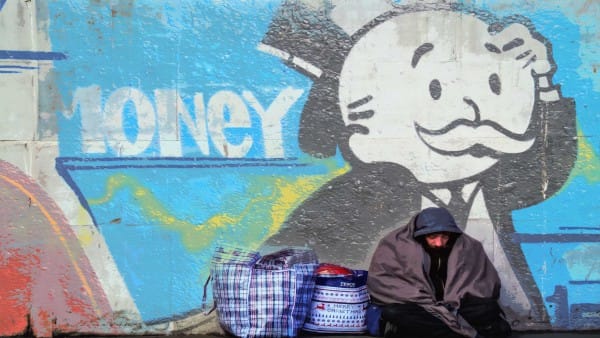 In response to all this, conservatives typically respond with something about how egalitarianism crushes the spirit of innovation and risk-taking so critical to a dynamic and modern society. But this is perhaps the most ridiculous premise of right-wing and/or libertarian economic thought.

Whereas conservatives argue too much equality creates disincentives to hard work — since after all, why would people put forth maximum effort without the possibility of great reward (and greater than that afforded to others who worked less hard) — the fact is, incentives really don’t work that way, at least not for most people.

To begin, such a position takes a very dim view of human agency, ultimately suggesting that no one would do much of anything unless they could get filthy rich, and not just rich but much richer than others. It is to suggest that doctors don’t want to make people well or heal the sick because healing is something they are called to do, but instead because it allows them to have a really nice house and things that others don’t. It suggests that inventors don’t create things to make the world a better place, or because of some inherent creative energy, but because patents can bring forth big paydays. It is to insist that musicians and vocalists and painters and writers and other artists do not create their art out of an intrinsic desire and need to tell their truth but to cash in royalties and have better vacations than the rest of us.

While there are no doubt people motivated by money — stock traders, bankers and mercenaries come to mind (and please pardon the redundancy there) — surely we don’t accept the idea that in the absence of great payoffs most of us wouldn’t get out of bed, do we?

Most people take pride in their work for its own sake, and often labor at jobs that don’t necessarily pay that much, but which they love (teaching, caring for kids or the elderly, nursing, etc.). The idea that allowing great inequalities is necessary to incentivize their efforts, and those of most people, seems not just fanciful but insulting.

Not to mention, even if financial motivation is significant for many, this still begs the question whether this motivation is natural and instinctual or conditioned by a capitalist culture that has inculcated great wealth as a virtue.

In short, conservatives may be right that greater equity would slightly stunt the work effort of those persons deeply bought into predatory, materialistic values, but one strains to figure out why this would necessarily be a bad thing. Perhaps we could do well with more nurses, teachers, farmers, elder care workers and artists, and fewer day traders and money manipulators, after all.

Additionally, even if we allow that complete flattening of inequalities might disincentivize hard work in some ways, is that a reason to allow the degree of inequality that we see at present?

Does the American work ethic genuinely hinge on whether 30 people are allowed to be as wealthy as the bottom half of the nation? Is the spirit of risk-taking dependent upon the top one-tenth of one percent possessing as much wealth as the bottom 90 percent?

Reasonable inequities owing to talent and effort might be entirely acceptable, but anyone believing that such disparities as these flow from natural inequalities of ability is too cultishly devoted to right-wing market logic to be taken seriously in this debate. The share of wealth captured by the wealthiest one percent of Americans has more than doubled since the 1970s, but only a fool would believe that the wealthiest 2.5 to 3 million people doubled their work effort in that period or intellectually evolved in such a manner as to justly capture all that extra stuff.

And finally, getting back to the point about ensuring that basic needs are met, less inequity (especially when it comes to necessities like food, shelter, and medicine) would likely spark a net increase in productivity and work effort.

Think about it. Currently, in a society where basic needs are up for grabs in the market, someone who is poor or struggling won’t likely feel much freedom to leave a crappy job, or perhaps try and start up their own business, or relocate for greater opportunities. Why? Because if taking the initiative doesn’t pay off — if they fail — the cost could be homelessness, illness or death for themselves or their families. They can’t take risks because the costs of failure are too high. On the other hand, with basic needs met they could take a shot at something better, exercise self-determination and autonomy, and strive for something greater than their current situation.