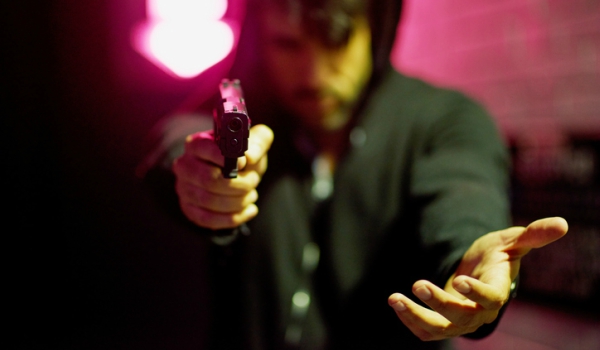 A little over a month ago, my partner, Alex, and I were attacked at our West Philadelphia home by a man with a gun. What started out as a simple neighbor dispute over porch gardens and fences turned into one of the scariest nights of my life. How a man with a gun ended up on our front steps is a long story (maybe for a different time), but one thing was clear: he intended to shut us up for good.

It worked. We moved across the country the next week.

As we hid in our basement from the gunman that night, desperately trying to get 911 to connect, my thoughts were racing.

“Why did we believe we would be safe in this neighborhood when everything else told us otherwise?”

“Why don’t we have a gun? Why were we so stupid as to be defenseless?”

“Is this really how I die?”

We were fine — physically at least. The gunman never followed us down to the basement and, eventually, the police showed up and arrested the perpetrators.

In the coming days, we had a lot to reflect on and I found myself surprised by the thoughts I was having. A staunch liberal/leftist for my adult life, I suddenly found myself having thoughts that felt a lot more conservative. Alex seemed to be experiencing the same thing, and it was clear that this traumatic incident had an effect on us.

Although I grew up in a conservative family and my dad was a Trump voter, I had never really understood, deeply, on a personal level, how so many people could hold conservative views. To me, the logic was never really there. Facts and reason were on my side.

Yet, when my life flashed before my eyes, facts and reason gave way to fear and instinct. I started to empathize with conservatives a little bit more.

It made me wish we owned a gun

I have always found guns abhorrent. The idea of owning a gun, a tool meant to kill someone, goes against every bone in my body. Even my conservative family growing up didn’t own guns — we were taught to value life and nonviolence as Jesus did. Jesus did not fight back when he was attacked — he turned the other cheek.

Though I’m no longer a Christian, Kingian nonviolence has guided my activism as an adult. I’ve given conference talks about why nonviolent civil disobedience is the best way to create massive cultural change, even against an oppressive regime.

Yet, when we were hiding in our basement hoping the gunman wouldn’t find us, I certainly wished I had a gun.

It’s one thing to use nonviolence as an intentional tool of civil resistance, knowing full well what the consequences may be.

It’s another thing entirely to be murdered in your own house because your neighbor is a psychotic drunk and apparently hates basil (true story).

Over the course of the week following the attack, Alex and I debated the merits of getting our own gun. For the first time, the idea of “self-defense” that conservatives talk about seemed realistic. While the idea of facing down government tankers with a handgun or a “good guy with a gun” taking down a mass shooter still feels like wishful thinking, defending yourself in your own home is apparently a real issue. Maybe I was naive and sheltered to assume those who worried about home defense were paranoid. Maybe I was wrong about guns.

Yet, as I talked through with Alex what could have happened if we had a gun, I started to doubt that a gun would have helped us:

Additionally, though owning a gun might have made us feel safer in that one moment, the idea of living with a firearm in the house does not make me feel safer in the long run. The truth is, women who have access to guns are much more likely to have that gun turned on them than to successfully use it for self-defense, often by their male partners.

Owning a gun may have made me less afraid for one night, but more afraid for every other night after that.

It was easy to fall back on racist thinking

“The awareness of death engenders potentially debilitating terror that is “managed” by the development and maintenance of cultural worldviews.”

Research into this theory has demonstrated that reminders of death can increase a person’s dedication to maintaining cultural norms, and increases support of in-group members while decreasing support for out-group members.

These findings have been replicated in hundreds of studies.

We’re All Gonna Die! How Fear Of Death Drives Our Behavior

If simply being reminded of death in a controlled study can increase in-group/out-group think, it’s no surprise that having a gun pulled on us by our black neighbors led to racist thoughts for me.

For my entire adult life, I have made a conscious effort to combat my own implicit biases and worked to be a better ally/comrade to people of color. I have both participated in and led diversity training and my school and workplaces. I volunteered and later worked for the YWCA (“to eliminate racism and empower women”). I marched in Black Lives Matter rallies after police shootings.

Yet, in those moments of fear, I had racist thoughts.

I felt like a fool for being so naive to believe that we could live safely in a black neighborhood.

I felt like we were too idealistic to believe people so different could really coexist peacefully.

Our block was full of grandmothers with whom we would make small-talk on the bus, toddlers who would run up and hug us on the street, and kids who were fascinated with our pet chicken. Most of these people were genuinely sad to see us go — and I feel sad leaving most of them, too.

Emory, a neighboring fifth-grader who had become our friend, asked us, “Why are you leaving so soon?”

I told him it was just time for a change. I didn’t want to scare him.

“Are you taking your cat?”

Yes, Emory, we are taking our cat.

When people are afraid and faced with death they fall back on cultural norms, including racism. I’m still working to overcome the biases that I felt a jolt to the forefront during that traumatic experience.

The Right acknowledges the reality of danger, the validity of fear. The Right then manipulates the fear.

For people who feel afraid every day and don’t have the opportunity to learn about these biases, I can understand how easy it might be to fall back onto racism, xenophobia, homophobia, sexism, etc. These cultural norms give us a sense of safety and protection while we attempt to manage the terror of our inevitable deaths. It’s neither right nor reasonable, but it is human. I understand that a little bit better now.

It made me appreciate the police

If there’s one thing the left taught me, it’s ACAB: “All Cops Are Bastards.”

But we called the police.

The simple fact is that the police probably saved our lives. If the police hadn’t arrived on the scene, I have no idea what would have happened — and I wasn’t about to let myself be murdered over ideological purity. Maybe this makes me a bad leftist. Maybe I’m a snitch, a bootlicker, a pig-loving class-traitor. But I’m also alive.

While the police have been a force of violence and brutality against the black and brown communities in America, the police still serve a necessary function that we have yet to replace with any other viable option.

Leftists advocate for communities to self-police, but this isn’t possible for most people today. Many communities are transient, changing from year to year without giving people the time to really build up trust with their community. Many individuals are unliked or antisocial, meaning they could be isolated from informal community-based systems. Realistically, our current communities are just simply not strong enough to self-police.

This doesn’t mean we shouldn’t continue to push towards more self-sufficient and connected communities. Accepting that sometimes, yes, we should call the police doesn’t mean that we have to stop fighting for a better world — including one that turns the entire paradigm of policing on its head. For now, though, people who are in danger should feel free to call the police when they have no other option without being ridiculed by self-righteous leftists who have never faced any real danger (like me, two months ago).

Where I stand now

This experience helped me understand conservatives — but that doesn’t mean I agree with them. I understand now, on a visceral level, how fear can lead to violent, racist, thinking. I understand how being pragmatic can seem safer than being idealistic. I understand that the world is not as safe as it may seem, and people can’t be trusted. I understand how at the end of the day, your loved ones come first.

I also understand that our biases can be challenged and unlearned.

I understand that even when my brain falls back to racist thinking out of fear, I can actively confront the cultural norms I am leaning on for “safety”.

I understand that, no, even after being attacked at gunpoint, I still don’t want a gun in my home.

Most importantly — I understand that my dream of creating a better world doesn’t have to come at the cost of my own life.