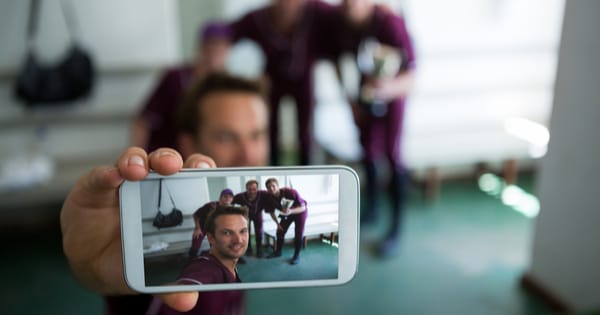 Dear Athletic Support: My son’s high school football coach just instated a new rule regarding cellphones; he banned them completely from the field house! The boys now have to leave their phones in their vehicles (or their backpacks if they don’t have a car). I’m not sure what sparked this change in policy, but as a mother, it deeply concerns me. What if there’s an emergency and I need to get in touch with my son? There was no major incident that I’m aware of which led to this. Can you think of any reason why our coach might have resorted to such extreme measures? — Searching for Service

Dear Searching: Not all that long ago, kids didn’t have cellphones. Heck, parents didn’t either. How on earth did we survive? The same way you will survive this coach’s new policy — by having a little faith.

Faith in your son’s coach.

A coach has the benefit of being removed from his players. A coach may love his players, sure, but he’s still not their actual parent, which is a good thing because sometimes parents can love a kid to death.

Which leads me back to your son’s coach and his new cellphone policy. If some sort of emergency were to arise, all you’d have to do is call the fieldhouse, the school, or even the coach’s cellphone. There’s no need for your son to have a phone. He wouldn’t have one when he’s out on the field anyway.

As to why this coach might have made this decision, well, I can think of one recent incident that might’ve led to his policy change.

The event took place after the LSU Tigers defeated the Alabama Crimson Tide a few weeks back. Coach Orgeron, LSU’s head coach, gave a fiery, expletive-filled speech in the locker room after the game. The speech was live-streamed by one of his players and has since gone viral.

When later asked about his speech, Coach O didn’t apologize for his rant, or for f-bombing Bama. He just said, “You get emotional when you talk to your football team, just like when we all talk to our family. We talk around the dinner table, and we say some things that outside the family we don’t say. It was not meant to hurt anybody or nothing like that. It was just a fiery moment.”

A locker room is not a dinner table, and a football team is not a real “family,” but Coach O is right on one account; there are some things I say and do with the people closest to me that I would not want aired publicly.

Oversharing is one of the biggest problems we face in 2019. Be it in a locker room, a business, or a friend group, there really are some things that are better left unsaid/unread/unseen.

The flip side of all this is that the transparency of our modern world holds people — coaches, parents, players — to a higher standard. But then again, are any of us really perfect? Would you actually want what goes on inside your house to be under constant surveillance?

Maybe your son’s coach made his decision simply because he didn’t want his locker room being broadcasted to the world. And, maybe, that’s not such a bad idea.
—