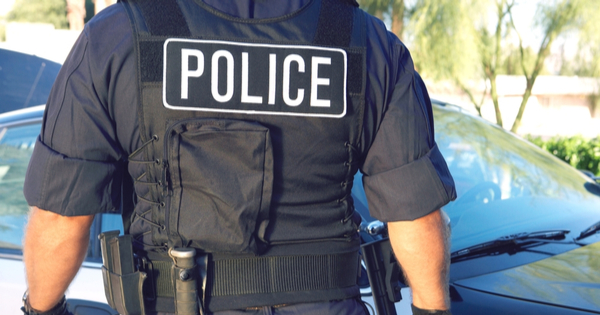 You don’t have to break the law to be an unfit police officer.

“Your mother was there when you left

“Your father was there when you left

“The Law was there when you left

“And that’s the reason you left

This is one of the less profane marching cadences from my USAF basic military training. Everybody understood it then because it reflected the social landscape of the time. A white boy facing criminal charges might be able to make the charges go away by agreeing to go away for a military hitch, particularly if there was a war going on.

Not everyone agreed that this common practice was a good thing. The major objection was the prospect of creating a class of criminals trained to use deadly weapons.

Others thought that teenage boys sometimes fail to develop adequate self-control as quickly as we (speaking as a parent) wish. This lack projects a decadence that is not really a reflection of ultimate values. Some teenage “crime” is stupid beyond the limits of human imagination and a temporary label of “stupid” might be fair, but a lifetime brand as “criminal” is absurd.

While I was a judge, the Department of Defense made rules for military recruiters intended to shut down the common practice of substituting boot camp for jail. I had enough trust in some of the prosecutors assigned to my court that we conspired to circumvent the rules and trade short jail terms for military service of at least three years. There were two caveats and both should be fairly obvious: that kind of deal could never be cut without the kid’s consent and we did away with the racial requirement.

Differential treatment of white and black kids when they are stupid teenagers is an injustice that feeds the black male as dangerous criminal stereotype when the black kid gets a record for conduct that would not follow the white kid. Travis County did not feed that stereotype in the misdemeanor courts under at least two county attorneys. It is my opinion that the elected county attorneys knew what we were doing, but I could not prove that either Margaret Moore or Ken Oden knew misdemeanor charges were going away in return for military service. I am dead certain that neither Moore nor Oden would stand for black kids being denied breaks available for white kids.

Another connection to the civilian world in that marching cadence is the reification of law. In the small town where I grew up, a policeman was known as “the law.” In the few times a call was answered by several police cruisers, the occupants would be referred to as “the laws,” as in,

You better put up that pistol and go because the laws are coming.

Some police officers no doubt found personification of the law in them to be useful. It helped to get compliance with orders. Who is more likely to get obeyed, Officer X or the law?

Taking the Kid Away graphic from Pixabay

There was an officer briefly with the Austin Independent School District who never seemed able to grasp why putting handcuffs on children middle school age and below always left somebody asking,

Then there was the time when the Austin City Council passed an ordinance declaring a curfew in all city parks. It was aimed at large and boondocky parks where the remains of campfires and narcotics paraphernalia and used condoms were showing up. There was a smaller park in the middle of Austin where few people knew of the ordinance until signs went up and even then it was hard to take it seriously.

The park in question was in one city block, with an arterial street along one side and the other three streets lined with old houses. The occupants were either old people who had lived there forever or young people who were renting and usually had some connection to the nearby University of Texas. The one block of park contained a public swimming pool, a corner marked off for playing ball, and playground equipment for the little ones. The closest commerce was one block down the arterial street: a laundromat and a convenience store, both open 24 hours.

The criminal at the center of this story was a woman who lived in one of the old houses bordering the park. Coming home late from a study group one night, she found her cupboard bare and her husband trapped at home by childcare duties. She lost a coin toss over who would go to the store and it was after two a.m. when she walked the two blocks to the convenience store, long past the new curfew.

She was walking home diagonally across the playground carrying a paper sack with milk, bread, peanut butter, and like items. Suddenly, a spotlight was aimed directly at her eyes and a loudspeaker was barking,

Get down! Down on the ground! Right now!

She complied, and shortly she felt the handcuffs on her wrists. The cuffs had been placed by a park police officer, who demanded identification. She had neglected to bring ID on a two block walk to a convenience store where she planned to pay cash. She did, however, point out her home less than half a football field away, and assured the officer that her husband was still awake and would be happy to fetch her ID.

He declined the offer and took her to jail, leaving some of her groceries on the ground where they had fallen. To his credit, the booking officer responded to the arrest with,

He offered the miscreant a phone call. She called her husband, who woke a neighbor up to stay with the sleeping kids and drove to the city jail to retrieve his wife. They found the groceries where she had dropped them.

The booking officer had destroyed the custodial arrest, but the park policeman insisted on writing a summons — which he could have done in the first place. The woman pled not guilty and, some weeks later, the case was called for trial in my court. I did not get a chance to rule on it because the assistant city attorney took one look at the offense report and said,

Are you kidding me? Shipe Park is only one block.

Because Shipe Park was in the middle of Austin, law enforcement was normally handled by the Austin Police Department. The prosecutor wondered how the park policeman happened to make that arrest? The officer replied that he was driving down the arterial street on his way to his assigned patrol at one of the big parks on the edge of town, when he observed “this flagrant violation of the curfew.” He seemed to think he was heroic for arresting a woman carrying a bag of groceries.

He was a newbie on the park police and they did not keep him.

Speaking of newbies, there was an airport policeman who caused a major traffic jam his first month on the job. Like most airports, Austin’s Mueller airport had a road that allowed dropping off of passengers and luggage near the departure gates. The newbie officer had stationed himself near the departure gates, and whenever a driver got out of his car, whether to say goodbye or help with luggage, the officer would start writing a ticket.

The driver would always get back in his car before the ticket was written. Every driver said,

The supervisor did not have to be summoned, because he arrived to investigate the reason for the traffic jam. Informed of what was going on by the officer who was attempting to arrest a driver in front of the departure gates, the supervisor said,

I only found out about this when I investigated why I had never seen a ticket from the airport police come to trial in over a year and suddenly there was a whole raft of them — -and they were all parking tickets! The assistant city attorney gathered them all up and moved to dismiss them, a motion I quickly granted.

You might ask how such things can happen in the People’s Republic of Austin? How many officers like that could there be?

Not very many. The three stories above are about the same officer. His unfitness did not even follow him to another police force in the same jurisdiction. After those bits of nonsense, he managed to get hired by the regular Austin Police Department by not mentioning his misadventures with the school district, the park police, and the airport police. He did not complete his six month probationary period with the Austin police.

When last heard of, he had applied to the Houston Police Department. I am not informed whether he got hired, but if he did not, there are still hundreds of other agencies in Texas that employ certified peace officers.

I spent ten years teaching out of state, so I do not know if these numerous agencies now have some method of being warned about an officer who abuses authority. I doubt it, because there are many ways to abuse authority without violating the law. It seems to me risky to turn a person loose with a pistol — even when they have stayed within the law — if they can’t handle a little authority without leaving their peers asking,