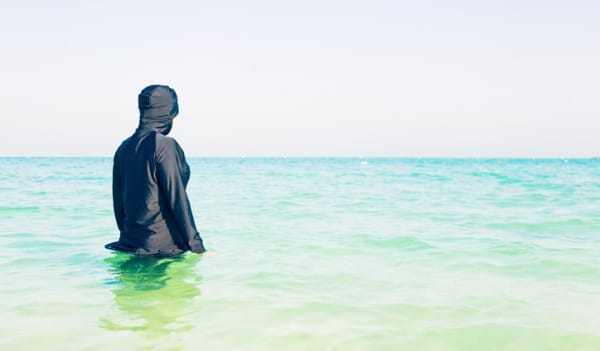 I woke up yesterday morning to the news that some Norwegians had got freaked out by bus seats.

Because they looked like rows of women in burkas.

These men are no different from the Iranian cleric who declared that women who wore revealing clothing caused earthquakes. Hearing this made me feel very powerful. I would flip my long uncovered hair wondering which part of the world I had rocked.

“Many women who do not dress modestly … lead young men astray, corrupt their chastity and spread adultery in society, which increases earthquakes,”

Unfortunately, my test of Sedighi’s hypothesis proved them wrong. Earthquakes did not happen on short skirt days and could happen on long skirt days. The earth has a mind of its own and does not follow the dictates of my sartorial choices.

I was not that powerful after all.

To the seer, the woman represents violence and terrorism (burkas) or she represents sex and gratification (bikinis). In both cases, women are turned into objects and dehumanised. We no longer see the woman. We see bus seats.

Let us look beyond the cloth and discover the human within.

Sometimes I wonder if men envy our ability to flaunt ourselves with bright colours, silks and feathers without raising eyebrows. But instead of honouring their inner diva, men try telling us how to dress.

Men, dress as you please, and leave my clothes alone.

I am perfectly happy if British schoolboys and French bus drivers decide to wear skirts because it’s too hot After all, men skirts are acceptable in some cultures: parts of the UK, the Polynesian Rugby Team and Malays in mosques.

Who got upset about school boys and drivers in skirts? Who made these rules? Men. Ironic considering 300 years ago, boys wore dresses.

Is it because men are in danger of embracing something which is seen as feminine? Does that threaten their idea of manhood? Here’s some news – women are happy for men to be themselves.

The Feminine is something mysterious, magnetic and hard to understand. If you can’t understand it, better to put it into a safe box where it is easy to understand and label. I still encounter people today who want women in neat little boxes labeled: Wife. Mother. Looks after the House. Cooks. Teacher. Nurse. Note Taker. Organiser. Secretary.

Women want more. They become lawyers. Doctors. Business executives. 6.4% of CEOs of Fortune 500 Companies are women. You heard that, an astounding 6.4% of companies are led by women.

And the people in the houses

all go to the university

And they all get put in boxes

little boxes all the same

And they’re all made out of ticky tacky

and they all look just the same

Mao Tze Tong said “Women hold up half the sky.” He was so wrong. They hold under 10% of it. The 90%++ decide how governments and corporations should be. Women may be half of the world population but they have little say in political and business decisions. Men proudly announce they allow their wives to make household decisions. So women run families within the larger institutions run by men. Think about the gaps and tensions that creates.

Perhaps New Zealand will increase the figure slightly but let’s check first that a prospective Prime Minister is not going to go on maternity leave.

Upon Jacinda Ardern taking over as the Labour party leader on 1 August 2017, a show host Mark Richardson said, New Zealanders had the right to know when choosing a prime minister whether that person might take maternity leave. Forgetting perhaps that New Zealand law regards such questions as discriminatory.

“If you are the employer of a company you need to know that type of thing from the woman you are employing… the question is, is it OK for a PM to take maternity leave while in office?”

It is a woman’s decision about when they choose to have children and it should not predetermine whether or not they are given a job or have job opportunities.”

Tony Blair was not asked if he planned on having babies after becoming UK Prime Minister in 1997. His son Leo was born while he was in office.

When a woman dares step out of her Little Box, we seek to challenge her – can you fit into the Man Box?

She is held to a higher standard.

Lest I be accused of being bias, this box thing happens to men too. If a man steps out of his box and tries changing a diaper, he gets held to the Mother Standard: It’s not straight, You didn’t apply powder, no this is where you dispose of soiled diapers. He is made to feel helpless and inadequate.

All genders are as guilty as straight-jacketing the others into boxes (writer’s note: I initially wrote “both genders” but my teenage daughter-editor corrected it to “all genders”).

A woman dared step out of the Woman Box and bid for the White House. She was held to a far higher standard and kept out. Since then, we have seen the White House dominated by a particular gender and colour. It has regressed.

Last week, two Republican female senators, Susan Collins and Lisa Murkowski were threatened for not voting for the Republican’s Obamacare repeal bill. The repeal bill was drafted by 13 republicans, all men.

“Some of the people that are opposed to this — there are some female senators from the Northeast — if it was a guy from South Texas, I might ask him to step outside and settle this Aaron Burr-style.”

Aaron Burr shot and killed Alexander Hamilton in a duel in 1804.

Farenthold has not invited John McCain to step outside. McCain is the third Republican senator to vote against the repeal bill, effectively blocking it.

Georgia Republican Senator, Buddy Carter said in an MSNBC interview: “Somebody needs to go over there to that Senate and snatch a knot in their ass.” Snatch a knot means to hit.

Two Republican male senators have expressed violence against two Republican women. Would they dare if half or a third of their fellow senators were women? These are grown men who have not learnt the crucial skill of communication, collaboration and negotiation – skills that women are strong in.

I wrote for CNN about misogyny in the Malaysian parliament last week. Like the Republican representation in the US Senate, a mere 10% of the Malaysian elected Members of Parliament are women.

Spaces that are dominated by men are more likely to see testosterone fuelled behaviour unhindered by deeper reflection, consideration and teamwork. This is precisely what we see in the US Senate, the Malaysian Parliament, Silicon Valley and companies like Uber.

Women are made to feel unwelcome in these spaces by encountering sexism, sexual harassment, bullying and threats of violence. Most women would choose to stay out of these hostile spaces and we lose incredible talent as a result. The world is denying itself the gifts that women bring by insisting that all genders fit into these Little Boxes.

“Why, there’s hardly room for you, and no room at all…”

Alice, speaking to herself as she grows too big for the White Rabbit’s House

It’s time to make room for women to stand alongside men. In Politics, in Business, in Families. Rather than be afraid of us, accept us and let us in.

This post was previously published on Linkedin and is republished here with permission from the author.