Researchers say the arctic sea ice is not only undergoing seasonal shrinkage in area, but that it is also thinning and losing much of its volume. 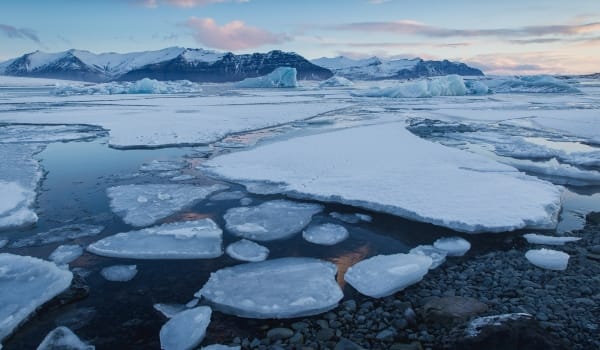 LONDON – The seasonal shrinkage of the area of Arctic sea ice is now well-established. But a new study has found that it is also undergoing thinning and a pronounced loss of volume all year round. Between 2003 and 2012 the volume of the ice declined by 36% in the autumn and 9% in the winter, a UK-led team of scientists has discovered. They used data from NASA’s ICESat satellite from 2003 to 2008, and new data from the European Space Agency’s CryoSat-2 satellite between 2010 and 2012, to estimate the volume of sea ice. From 2003 to 2008, they found, autumn ice volumes averaged 11,900 cubic kilometres. But from 2010 to 2012 the average had dropped to 7,600 km3 – a decline of 4,300 km3. The average winter volume from 2003 to 2008 was 16,300 km3, dropping to 14,800 km3 between 2010 and 2012 – a difference of 1,500 km3. “While two years of CryoSat-2 data aren’t indicative of a long-term change, the lower ice thickness and volume in February and March 2012, compared with same period in 2011, may have contributed to the record minimum ice extent during the 2012 autumn,” says Professor Christian Haas of York University, Canada, a co-author of the study. The research was funded by the UK’s Natural Environment Research Council (NERC), the European Space Agency, the German Aerospace Center, Alberta Ingenuity, NASA, the Office of Naval Research and the National Science Foundation. “The data reveals that thick sea ice has disappeared from a region to the north of Greenland, the Canadian Archipelago, and to the northeast of Svalbard,” said Dr Katharine Giles, a NERC-funded research fellow at the Centre for Polar Observation and Modelling (CPOM) at University College London, and another co-author of the report, published online in Geophysical Research Letters. NERC says: “The findings confirm the continuing decline in Arctic sea-ice volume simulated by the Pan-Arctic Ice-Ocean Modelling & Assimilation System (PIOMAS), which estimates the volume of Arctic sea ice and had been checked using earlier submarine, mooring, and satellite observations until 2008.”

PIOMAS was developed at the University of Washington’s Polar Science Center, which says of the part of the Arctic it studied: “Monthly averaged ice volume for September 2012 was 3,400 km3. This value is 72% lower than the mean over this period, [and] 80% lower than the maximum in 1979…” Other satellites have already shown drops in the area covered by Arctic sea ice as the climate has warmed, and its extent reached a record minimum in September 2012. But CryoSat-2, launched in April 2010, differs in its ability to allow scientists to estimate the volume of ice, a much more accurate indicator of the changes taking place in the Arctic. NERC says the satellite measures ice volume using a high-resolution radar altimeter, which fires pulses of microwave energy down towards the ice. The energy bounces off both the top of sections of ice and the water in the cracks in between. The difference in height between these two surfaces lets scientists calculate the volume of the ice cover. The team confirmed CryoSat-2’s estimates of ice volume using measurements from three independent sources – aircraft, moorings, and NASA’s Operation IceBridge. The decline in Arctic sea ice may have serious implications both regionally and globally. While much of the Sun’s heat is reflected back into space by light-coloured ice, more of it will be absorbed by the darker water exposed as the ice melts, speeding up the process of global warming. The melting may also accelerate the thawing of the permafrost, allowing methane, a potent greenhouse gas, to escape to the atmosphere. It could also help to destabilise the Greenland ice cap. The research findings were the result of collaboration between teams from UCL, the European Space Agency, the Jet Propulsion Laboratory, the University of Washington, York University, Alfred Wegener Institute for Polar & Marine Research, Woods Hole Oceanographic Institution, Morgan State University and the University of Maryland. – Climate News Network