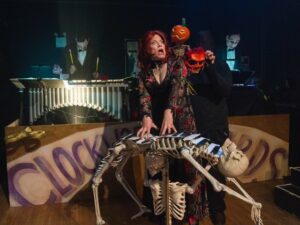 My husband and I have always had a love for Halloween even prior to having our two kids. We plotted our costumes months before, whether purchasing them as a couple costume, or buying supplies to make elaborate costumes so we could march the NYC Village Halloween Parade. It was only fitting that we would love seeing All Hallows Eve – Horror Musical with Puppets, an adult puppet show with humor, horror, music, dancing and adventure.

This show is interactive and involves some audience participation and starts off by making you feel like you are part of the show. (There is seating provided in each room if needed, but be prepared to walk and wear comfortable attire).  Set in multiple rooms of the Connolly Theatre, audience members begin their journey by walking to twins Evan and Eve’s house, where they are decorating with their Mom and Dad.  This begins their adventure of getting lost trick or treating.  You will then travel to follow Evan and Eve on their dark path where they become lost. After vandalizing and toilet papering a home, Evan rings the doorbell and starts their nightmare on Halloween night.

The doorbell ringing awakes the Witch demons and her musical ghastly puppets, made up half of body parts, bones and dolls.  They dance, charm and mesmerize you with their song! The Witch’s goal is ultimately to charm her victims and devour them and their souls!

The show stopper is Jennifer Barnharts performance. You couldn’t pick a more perfect role for her voice, which was sweet and seductive and then can turn ferocious when the Witch is hungry enough.

The puppetry is phenomenal. The larger than life puppets especially at the end amaze, with multiple puppeteers animating them to talk, sing, light up and move. Larger than life Pumpkin Man and Clowny (and their puppeteers) carry/move Eve, show anger, horror, sadness through their gestures and movement.  It’s sad that this show only runs for a limited time, and so much work went into designing and creating such beautiful works of art.

Martin P. Robinson (producer, writer, director) is a professional puppeteer since 1975 and is best known for his work on the original 1982 production of “Little Shop of Horrors” and the Broadway revival in 2003 in which he designed, coordinated construction and performed the carnivorous plant Audrey II.

Paul Rudolph (composer) is a composer, arranger, instrument builder, and vocal music director/recordist for “Sesame Street”, where he received Emmy nominations for Music Direction in 2009 and 2013.

Members of the cast:

Jennifer Barnhart was an original cast member of Avenue Q on Broadway. Other favorite stage roles include Lady Macbeth, General, Veronica in God of Carnage and the Angel in Angels in America. TV credits include Sesame Street, Julie’s Greenroom, Between the Lions, Law & Order: SVU and House of Cards.

Tyler Bunch has been working as a professional performer based in NYC for the last 25 years. His career has seen him in regional theater, off-Broadway, the small screen, the silver screen and now digital screens as a puppeteer, actor/singer, and voice artist.

Aubrey Clinedinst is a clown and puppeteer whose professional credits include works with Dario Fo,  The Swedish Cottage Marionette Theatre, and Payomet Performing Arts Circus Cape.

Austin Michael Costello is a Puppet Artist from Long Island. Costello received his BFA in Puppet Arts from The University of Connecticut’s Puppet Arts Program in 2015 and he has since gone on to work for Puppet Kitchen’s monthly Monitor Night, in The Jim Henson Company’s New York Shop and Archives, and as an assistant puppeteer on Sesame Street. He currently works at the Long Island Children’s Museum Theater as the Resident Puppet Artist.

Cedwan Hooks is a puppetry designer and character fabricator. He has been awarded a Blue Star Award for Puppet Design and Creation from the Starlight Theater in Kansas City.

Kathleen Kim is a puppeteer and TV producer based in NYC. Her puppetry credits include “Sesame Street,” “A Beautiful Day in the Neighborhood” (starring Tom Hanks) and more.

Marca Leigh* was recently seen as Bianca in Taming of the Shrew at the American Shakespeare Theatre in Stratford, CT and Electra in Music Theatre of CT’s main stage production of Gypsy!.

Spencer Lott is a maker, writer, and puppeteer.  His puppetry credits include A Beautiful Day in the Neighborhood (starring Tom Hanks), Sesame Street, and more.

Kaitee Yaeko Tredway is a puppeteer, theater maker, and kickboxer. She has performed in Boston as an actor, puppeteer and historical interpreter.

We were entertained from start to finish, and it was a great way to kick off the Halloween season.

The run time is approximately 80 minutes with no intermission.