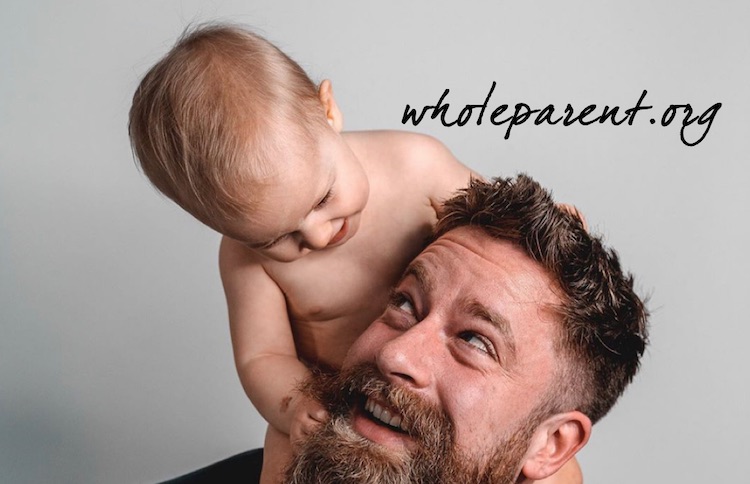 I had the pleasure of taking a friend’s child to school a few weeks ago. I was humbled by the feelings I felt walking through the elementary school halls with all the excited or drowsy parents shuttling their progeny off to their classrooms. It was a frosty morning and the halls were warm and full of glue, crayon, glitter, and kids-in-progress smells. My heart was cracked right open in that 10-minute journey. A sadness so profound it wrecked most of my morning.

What We All Lose In Divorce

Everyone loses in divorce. The kids lose the confidence and joy that a pair of loving parents can give. And the parents each lose a part of the future mornings and future evenings together. Dad’s often (80%) lose the most, however, as we are given about half as much time as the mom. The every-other-weekend schedule is not balanced, but it’s what the states often call the Standard Possession Order. (Also known as 1st, 3rd, and 5th. as there is occasionally a bonus weekend for dads, to help make up for all the lost time.) And so, dads begin the journey in a very different universe.

Moms get a couple of weekends and two weeknights free. It’s almost as if they hired childcare for those breaks from being a full-time mom. But it’s not the same for dads. Most dads I talk to in my coaching practice are struggling with the loss of time with their kids. There is a huge gaping hole every single week when we don’t have our kids. And there is the terrible Monday dropoff blues when you deliver your kids back to school and realize you’re not going to have more than an overnight (just enough time for dinner and homework) for 10 days. It’s hard to comprehend if you’ve never been away from your children for that length of time. For dads this time gap is the biggest hardship of the divorce.

Most Dads Are Good Dads

The hardship for me was not the money or losing the house I primarily paid for. The biggest loss for me was kid time. And dropoff Monday’s became a cycle I came to dread. As a good dad, I even dropped my kids’ bags back at my old house.  Thankfully, most of the time my ex-wife was already way at her job. But pulling your kids’ suitcases back into your old house, the old smells, the paintings on the walls that you hung… It’s devastating.

Walking out of that house twice a month was the hardest part of being a single dad. You lose your time with your kids. And you keep having to return them to the house and the woman who is going to get twice as much time as you get. It’s not fair. But divorce is not fair. Still, the experience is universally hard for the dads I speak with. We want time with our kids. We want equal time with our kids. And we are given unless we sue our soon-to-be-exes, the 70/30 schedule, and the non-custodial parent role.

Deadbeat Dads Are Mostly a Myth

There’s a concept that circulates from time to time in memes and on social media sites that seems to accuse many dads of being deadbeats. It seems to me, a lot of this anger is residual anger from the divorce and does not reflect the lives of all the dads I talk to. In my case, I became a deadbeat dad the minute my ex-wife enlisted the “enforcement” arm of the Attorney General’s office. I was late on one payment and was communicating with her regularly about how I would catch up when my job caught up on paying me. I was working. I was paying my child support. And I was ONE PAYMENT LATE and my ex-wife turned me in as a deadbeat dad. And from then on my life has been turned upside down by the Enforcement Office of the Attorney General of Texas. And my case is not unusual.

I’ve gathered some information and research into this topic here (The War on Divorcing Fathers: Deadbeat Dad Accusations Are Abusive) and I don’t need to go back into the math of the situation. I’m mostly interested in the emotional impact of this loss of kid-time, parenting-time, and how it impacts both the kids and the dad in different ways than the mom. My ex-wife was just going for what she knew she could get. She was fully aware that I was a 100% involved dad, that I was 100% up for becoming a 50/50 co-parent. BUT, if she had been honest about the process, she would’ve given her kids the benefit of having me 50% of the time as well as her. Instead, she had to lie to herself and the counselor and make the case for being “the better parent.”

We agreed to a collaborative divorce. In doing so, we both agreed not to sue each other over the divorce arrangements. But she was in no mood to collaborate when it came to the parenting schedule or the child support. When push came to shove, the collaboration ended when she claimed to be the more responsible parent (the parent the kid’s needed more than me). I gave in. I was sad, I was overwhelmed with the prospect of divorce, and I did not want to lawyer up to fight this injustice. I was given the dad’s divorce package. (My divorce settlement looked like this: $1,500 monthly child support, $300-$500 per month health insurance for both kids, 30% of the parenting schedule, and she would also get the house, to “keep the kids in the most stable environment.”)

When I was immersed back into the sights, smells and happy sounds of the elementary school morning, I was painfully aware of what was taken from me in the counselor’s office when I agreed not to fight for 50/50 parenting. It was not about the money or the house, the theft was the time with my kids. In some archaic legislation, dads are seen as breadwinners while moms are the emotional heart of every family. And 80% of Texas divorces go this way. Dads are beginning to stand up and fight for 50/50 parenting, but it’s an expensive option. Back in 201o when we divorced, I probably would’ve spent $50,000 and lost.

The joy I felt walking my friend’s child into their classroom was profound. I was part of the happy tribe of parents. Sure, there was the overlay of sadness at how much of this experience I lost due to the divorce, but overall I was allowing the happy feelings to overwrite the sad memories. In some kind of spiritual win, I was being given an opportunity to a tiny bit of the “school dropoff” again. For 10-minutes I felt like part of that energetic and optimistic flow of love, delivering our kids into the hands of caring teachers. I was bursting with happy vibes. And as I’m pretty gregarious, I was sharing my smiles and easy “hellos” with a lot of the other happy parents.

My kids are 17 and 19 years old. When my wife asked for the divorce they were in 3rd and 5th grades. I was in the middle of the happy dropoff years. The golden time of parenting, when they are still 100% dependent on your guidance and love. And it was this golden time that was stripped so efficiently from my life. If I played it perfectly, I might get 6 dropoffs in the course of a normal month.

Here is the Standard Possession Order Calendar for 2019. 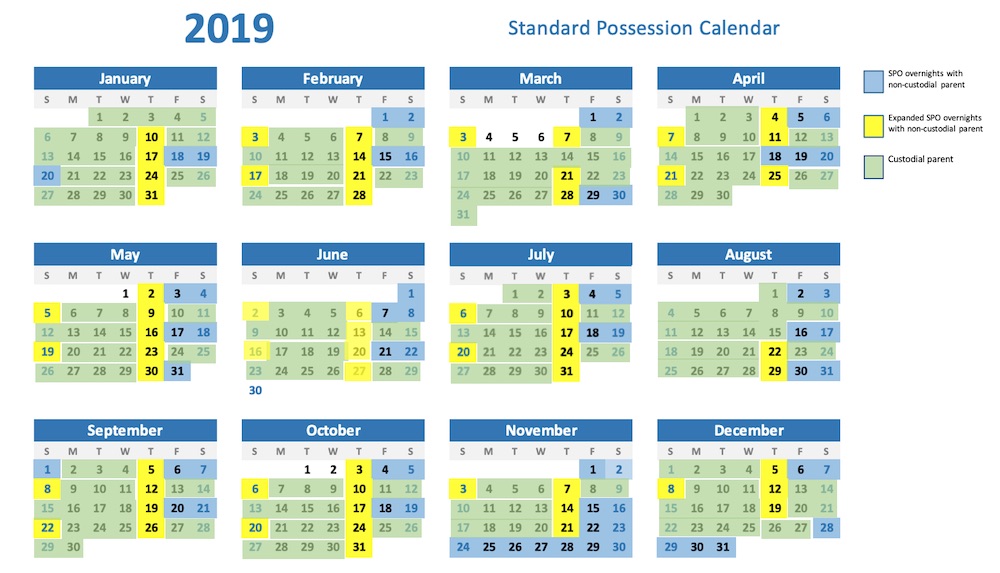 What I noticed right away while building this calendar was the sea of green. Huge chunks of green. Three and four day weeks, every single week. The heart of each month is filled with green. At least, I can say I got the expanded SPO, which includes the yellow dates. I was saddened almost 10-years ago when I built one of these calendars for the first time. Saddened by the loss. My kids missed a huge part of my optimistic and joyful dad. I can see how my then-wife would’ve looked at this calendar and chosen to be the green parent. BUT: if a parent is 100% available, and the parenting routines have been shared 50/50 as a rule, I believe the divorce calendar should follow that same agreement.

I did not get married with a 70/30 commitment. I negotiate to have kids by asking for a 30% role in the chores and parenting duties. When you decide to have children, maybe we need to sign a pre-natal agreement.

The Pre-Natal Agreement (from The Whole Parent)

Dads Are Equally Important In Their Kids’ Lives

I strongly believe that if a family co-parented at 50/50 during the marriage, they should continue that agreement in the case of divorce. I believe my kids would’ve been better served to have me in their lives in equal amounts to their mom. And as I was walking down the elementary school hallway, imaging any dad facing giving 70% of that joy away, I was heartbroken. I was sad for me, sure, but I was really sad for all the future dads who were going to lose out huge green chunks of their kids’ lives.

I am pro-mom, but I’m more pro-family. If we agree to have kids it’s 50/50 forever. Anything less, and I would not have agreed to have kids in the first place. I think that’s a discussion pre-kid couples need to take seriously. We all enter marriage and parenting hoping for the best. The current statistics show, however, that more than half our kids are going to go through at least one divorce. Let’s make that divorce fare to both the kids and the dads.

Watch this Video: Federal Title IV-D Incentives shows how designating custodial and non-custodial parents and establishing child support, gives federal money to each state for enforcement. Over 60% of the Office of the Attorney General in Texas are assigned to child support enforcement. They are incentivized to keep the child support payments high to earn more federal dollars for their department.