Let’s not fool ourselves into thinking that we’ve been delivered from racist thinking or that somehow it just doesn’t affect us. 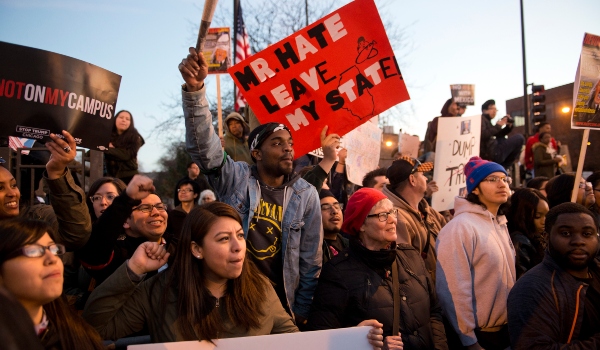 I for one found it ludicrous that, right after President Trump made a statement critical of the quartet of freshman House members who are all women “of color,” he insisted, “I don’t have a racist [bone] in my body!” Even a cursory peek at Trump’s record should put the lie to that statement.

That being said, let’s not fool ourselves, however, into thinking that we’ve been delivered from racist thinking or that somehow it just doesn’t affect us. Because, whether we want to admit it or not, it does.

We saw this at my church, which today is intentionally racially and culturally diverse, during our annual missions emphasis month three years ago, coincidentally during the presidential campaign. Several hundred people left due to the slogan “Welcome the Stranger,” taken as a shot at Trump’s stance on illegal immigration. And I’m told that many of those members actually made racist statements on the way out.

Which tells me that, as much as we may take pride in being “reconciled,” we really don’t know each other well — or at least as well as we think we do. The reality is that, over a certain age, none of us is colorblind; I lost that in the first grade (and others feel that probably before then).

As a fifth-grader in a Christian academy I absorbed, and to my shame dished out, a lot of anti-white rhetoric courtesy of my father. What changed me, however, was a number of younger girls, all white and mostly blonde, who became emotionally attached to me for reasons I still don’t understand. Gradually it dawned on me that, if I were to have relationships with such girls, I needed not only to tone that down but eliminate it altogether by changing my thought process. Martin Luther King Jr. helped in that respect, never downplaying the racism that he fought (and eventually killed him) but trying to get beyond it.

It would help if we all expressed similar regret and repentance over what’s been happening in our society, especially over the last few years — and not wait for our opponents to “go first.” Let’s act in humility and admit that we all have partaken of the poison of racism. Were we to do that it would be so much easier to purge from the church and thus hold the world accountable for how it chooses to operate.

A version of this post was previously published on uncommonsensecommentary.blogspot.com and is republished here with permission from the author.