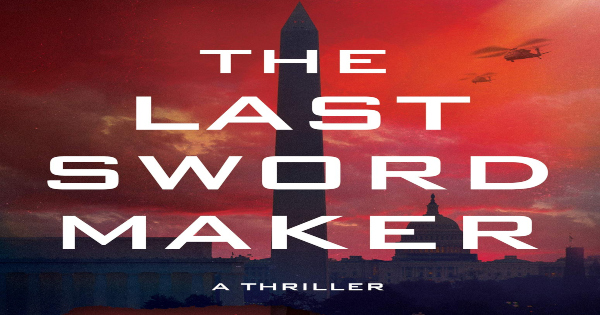 A thrilling tale unfolds in ‘The Last Sword Maker’

I have read a few good thrillers over the years. When I heard about The Last Sword Maker I was looking forward to reading it. I was able to get a review copy of this book and here is what I thought of it.

You can read the plot for The Last Sword Maker here:

At the Pentagon, Admiral James Curtiss is called to an emergency meeting. Satellite images prove that a massive genocide is underway, and an American spy has made a startling discovery. This is no disease. It’s a weapons test. Chinese scientists have developed a way to kill based on a person’s genetic traits. But that is only the tip of the iceberg. The success of their new weapon proves that the Chinese are nearing “Replication”—a revolutionary breakthrough that will tip the global balance of power and change the way wars are waged.

Now the US must scramble to catch up before it is too late. Admiral Curtiss gathers the nation’s top scientists, including a promising young graduate student named Eric Hill who just might hold the missing piece to the replication puzzle. Soon Hill and his colleague Jane Hunter are caught up in a deadly game of sabotage as the two nations strive to be the first to reach the coveted goal. But in their headlong race, they create something unexpected … something the world has never seen and something more powerful than they had ever imagined.

I had a great time reading this book. The characters were rather likable, and the villains truly despicable. While the tale unfolded it took a few surprise turns that I doubt most readers will see coming. As this tale came to a close, I was satisfied with how it ended. If you are a fan of thrillers then this is a book you will want to read.

The Last Sword Maker is available now. You can order this book on Amazon and at Barnes and Noble.