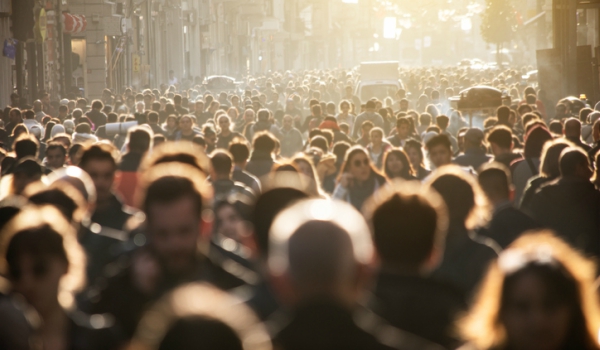 The impact of diseases and epidemics on human life is as old as humanity. Disease is mentioned in texts thousands of years old, its presence changed political and economic history, cultural habits, and even morality. But often we think of disease as a stranger. It’s something that comes from somewhere else. But the systems that are in place affect how easily disease moves among us.

Let’s look into how disease impacts us with unintended consequences. First, a view from fiction.

In Ray Bradbury’s short story “The City,” an earthling crew from the only “light-year rocket in existence” lands and explores a dead city on a dead planet, billions of miles from earth. Unknown to the crew members, the planet’s long-dead inhabitants were killed by earthling germ warfare 20,000 years earlier. Those former inhabitants also built the city to get their revenge.

Smith, one of the ship’s crew, speaks his fears. “I don’t like it. I don’t know why. Do you ever feel you’ve seen a place before? Well, this city’s too familiar.” After thousands of years, mechanisms within the city come alive, sense that the crew members are earthlings and capture them. The earthling crew are infected with the same disease, killed and reanimated as flesh-sheathed robots, and sent back to infect their fellow earthlings. Should have mentioned spoiler alert… It’s still a good read.

This story helps us imagine the real impact of disease and transmission to unexposed groups. These are questions humans have dealt with for thousands of years, but only relatively recently dealt with at scale and without a comparable past. Let’s look at the ways in which disease and systems interact to form epidemics across history.

The SIR model (Susceptible, Infected, Recovered) demonstrates how disease spreads across populations. With inputs that drive each one, the change between susceptible, infected, and recovered parts of the population can help predict the impact a disease will have.

When a disease is not generally life-threatening, populations can become immune to it or can at least accommodate it, even if the disease can spread rapidly. Examples include many variations of the flu, conjunctivitis, and the common cold. Even when diseases are generally life-threatening, populations can develop immunity and remain protected if the spreading speed is manageable, for example through knowledge of hygiene or herd immunity. Herd immunity is a quality that vaccines develop more quickly and with less mortality than individuals in a population naturally becoming infected and recovering.

But when mortality is high, through both rapid transmission and impact of the disease itself, there isn’t time to adjust to the disease’s presence. Plagues of many types sometimes had mortality rates of over 50% in Europe. The way these plagues spread was often linked to trade. A port city received a ship from a distant land (distance was relative and people traveled much less in the past). This ship carried infected people or animals. The local population that was not resistant to the disease became infected. Without knowledge of how diseases were transmitted, local activities could spread the disease faster than otherwise.

The periodic experience of suffering from a plague brought from a far-away land is woven into European history. We also have fiction that gives a view: Boccaccio’s Decameron and Defoe’s Journal of the Plague Year are good reading.

The European experience of being on the receiving end of a plague was often framed in religious terms. Many of the proposed antidotes were religious as well. But with the European settlement of the New World, something started to change.

Early European settlers to the New World brought diseases that affected Native American populations at very high mortality rates — sometimes with rates of over 90%. One Native American tribe of Massachusetts saw their population nearly wiped out, going from 30,000 people to 300 around the year 1620. (The cause is believed to have been smallpox entering a population with no history of the disease.)

Seeing native populations so rapidly become infected and die led to various interpretations in the era before epidemiology. These interpretations ranged from the idea that God was clearing the New World for his favored people to the new arrivals bring magic that they use against Native Americans.

One belief in the magic that the Pilgrims had brought came from Native Americans noticing barrels of buried gunpowder, which was believed to be the source of the plague’s magic. A Sachem (chief) asks for the English to use their plague against enemies.

“Not longe after being at varience with another Sachem borderinge upon his Territories, he came in solemne manner and intreated the governour, that he would let out the plague to destroy the Sachem, and his men who were his enemies, promising that he himself, and all his posterity would be their everlasting friendes, so great an opinion he had of the English.”

The well-known Tisquantum (Squanto) of the New England Patuxet tribe had actually previously been kidnapped, brought to Spain, sold into slavery when he escaped back to America in 1619 only to find his tribe destroyed by an epidemic. He then went to live with the Wampanoag tribe, at which point he encountered the Mayflower Pilgrims and played a part in the first Thanksgiving. He died of disease in 1622.

In the years before epidemiology, the noted non-religious causes of the plague were often erroneous as well, as seen in this pamphlet from 1744:

“Infection of the Plague seldom, if ever, communicated by touching of Persons infected, or of Goods brought from infected Places; but The productive Cause of the Plague, a Fault of the Air, and the Air, the principal Cause of spreading the Infection.”

— from title page of The Plague: No Contagious Disease

Just as resistant populations can bring disease with them, they can also lose their resistance. This loss can happen over just a couple of generations. While smallpox infections in 17th century London spread easily through the densely populated city, most people were infected as children (smallpox was sometimes called the “disease of childhood”), the mean age of death from smallpox being 2.5 to five years. Those who survived maintained immunity as adults. New England people, both indigenous and European, who did not have smallpox exposure as children would then be susceptible to smallpox as adults. After a few decades of life in New England, even the European population began to suffer from smallpox at higher rates.

Habits can impact the spread of disease. And habits that are encouraged across communities are systems at scale. Anything at scale, remember, has potential second-order effects.

One such effect we discussed in an earlier post was the Plague of Commodus, which some belief was spread as a result of public policy. That is, the Roman households’ need to manage through grain price spikes and shortfalls required illicitly storing grain at home. This grain attracted rats with fleas that carried plague into the home.

What we call normal hygiene today would be an absurdity in most historical places and times. Likewise, what passed for common eating, dressing, and washing practices in the not-so-distant past would often be revolting today.

The book Concepts of Cleanliness, by Georges Vigarello, focuses on historical cleanliness habits in France. In it we learn of common practices that included how it was the practice to “dry wash” the skin by wiping with linen rather than wash with water and soap and how the ignorance of microbes meant that people did not fear eating and drinking from another’s bowl without first washing it.

That brings us to the habit of hostility from the Andaman Islands. A little-known isolated tribe made it to the news recently: the Sentinelese. They are notoriously hostile to outsiders and recently received and then killed a prospective missionary.

The Sentinelese have the right strategy.

Previous attempts to contact them have been met with avoidance and hostility as well. One report is from when British officer Maurice Vidal Portman and an armed party explored the island in 1879. After a few days, the only Sentinelese they could find was an elderly couple and some children (who may have just been unable to hide from them). The British took these Sentinelese with them on board ship, but they became sick and the elderly couple died. Portman then returned the children to the island with gifts.

The Sentinelese are right to enforce their isolation. They have survived their long-isolated history (also certainly due to location, policy, and luck) and their survival shows that their strategy has been correct. Varying from this strategy will be very tricky.

Once you are this far outside of the realm of shared disease you need to stay outside. Still, as it becomes easier to reach North Sentinel Island in private, unstructured expeditions (think drones and other new transport) how much longer will the Sentinelese last?

I remember a tour guide at the Air and Space Museum told me those years earlier when he worked at NASA he happened to find himself standing next to Neil Armstrong at a urinal. All he could think was “moon germs,” a fear of the era — because who knew? When the Apollo astronauts returned to earth they stayed in quarantine for a month. No one knew what they might bring back from the moon. (Or what they might leave on the moon.) That’s the kind of precaution to take.

“Everything totals. These are the men of a planet called Earth, who declared war upon Taollan twenty thousand years ago, who kept us in slavery and ruined us and destroyed us with a great disease. Then they went off to live in another galaxy to escape that disease which they visited upon us after ransacking our world. They have forgotten that war and that time, and they have forgotten us. But we have not forgotten them. These are our enemies. This is certain. Our waiting is done.”

— “The City” by Ray Bradbury