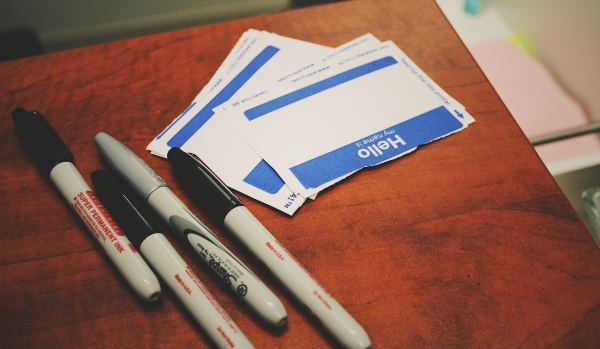 So, someone in your life has asked to be called by a different name. Maybe they’re a relative, a close friend, or someone at work.

Whatever your relationship with them, it can be tough to understand name changes at first. And it can be really hard to break the habit.

Here are some helpful hints on how to navigate relearning a name.

What you are called — or more importantly, what you call yourself — can be a very powerful tool in constructing an identity.

Because we are given names when we are born without any of our own personal input, it isn’t uncommon to assume another name or nickname as you grow older.

Sometimes explicitly choosing to take on a new name may have political reasons, cultural reasons, affirm a developing gender identity — or perhaps you just don’t like your name.

The point is, there are many valid reasons for changing one’s name.

For example, many people of color have worked very hard to reclaim cultures that White supremacy has attempted to erase.

In preserving culture, occasionally people shed their “slave names” or “[insert religion here] names” with the main reasoning being that what they have been dubbed at birth was a reflection of the mass enslavement, oppression, genocide, or general disenfranchisement of their ancestors.

Malcolm X is a good example of this in that he shed the surname “Little” for “X” to represent the unknown name his ancestors lost when forced into slavery. He is quoted as saying:

“The real names of our people were destroyed during slavery. The last name of my forefathers was taken from them when they were brought to America and made slaves, and then the name of the slave master was given, which we refuse, we reject that name today and refuse it. I never acknowledge it whatsoever.”

Some take on a new name in the pursuit of affirming their gender identity.

Note: It’s important to remember that the interpretation of a name as masculine or feminine is subjective and that there is no requirement for transgender people to change or choose new names in order for their identity to be valid.

The only person who can define your gender is you! What you do with it and how you choose to present it is under your (and only your) control.

Regardless of someone’s rational for taking on a new moniker, it’s important to respect that person’s wishes and address them by that chosen name.

2. Remember That it Isn’t Your Place to Ask Certain Questions

It isn’t polite to ask someone why they have chosen to go by a new name.

There are a lot of reason why someone would want to shed an old identity: dysphoria, trauma, hiding from an abuser — the list goes on. And these may not be experiences they want to share with you right now. That needs to be respected.

Try not to insert yourself into a conversation that doesn’t concern you, and try not to pry. It’s vital to respect privacy, as prodding an individual may lead to accidentally triggering them.

You also don’t want to shame someone for choosing a new name, so don’t ask for their full name only to respond with “Oh, but your name is so pretty! Why would you want to change it?”

At that point, you’re really just questioning that person’s autonomy and ability to make their own decisions.

Also, don’t volunteer birth names to others without consent.

Introducing someone as “____, but you know [them] as ____!” is a great way to ensure that individual never talks to you again.

Doing that would take away their ability to define their identity for themselves. It’s never your place to take the power of autonomy away from someone. Remember, you want to be sensitive.

It isn’t helpful, and you could be pushing that person away from sharing sensitive information in the future. It’s as if you’re putting a sign on your forehead that warns people away from coming to you for support — because that’s what you’re denying them: support.

If you can’t support their name choice, how can they expect you to support them on other matters?

If that person wants to share the ins and outs of why they’ve changed their name (and the how they chose the new one), then that is their business. But there is a reason they don’t want to go by their birth name, so do everything you can to respect that.

If you accidentally refer to someone by the wrong title, take a moment to stop, apologize, and restate your sentence with the correct one.

While you can’t take away the hurt you might have unintentionally inflicted upon someone, it does help to show that you are acknowledging your mistake and doing all in your power to correct it.

Note: Do all in your power to correct it. Your apology will wear thin if it isn’t accompanied by a deliberate effort to do better.

This small gesture of respect is sometimes the best thing you can do to reinforce another person’s identity.

Whether you mean to be rude or not, this question undermines any work an individual has done to assert themselves. Their real name is the name they choose for themselves and the name they identify with.

By asking what someone’s “real name” is, you’re saying the name someone else chose for them is more important and reflective of them than the name they chose and prefer.

This nullifies the validity of a person’s individuality and autonomy to make their own decisions regarding what they are called.

Remember that sometimes there are subjects that aren’t your business — and that’s okay!

If an individual wants to share what their legal or birth name is/was, then they will. If not, you should accept that and politely move on with the conversation.

5. Refer to Someone by the Correct Name, Even When They Aren’t Around

This part is so important!

Names are very specific ways of identifying who someone is, and it’s so vital that we make an effort to use the right name even if we aren’t around that individual.

Titles can shape our perception of each other, and it’s only fair that we perpetuate a person’s chosen image.

When you’re talking about someone whose name has evolved, be mindful and make sure to use their new name with other people. Being a good friend means being supportive, and this means your support shouldn’t change based on a lack of your friend’s presence.

It’s not really your place to decide those things.

Remember how I mentioned that our perception of what is masculine or feminine is subjective? That’s because it is. Culture, upbringing, influence, language, or even personal taste can determine the way people consume presentation.

And if you don’t think someone’s name sounds like a name, think long and hard about where your own name came from. (Hint: Someone, at some point, made it up.)

Just take a second to recognize that not everyone thinks alike, and it isn’t your place to police the way another person expresses themselves.

7. Make Sure Using the New Name Is Okay in Different Spaces

Sometimes people are out to a group of friends, but not to family. Or maybe they’re only comfortable asking one or two close family members to refer to them by a new name.

Whatever the situation, you don’t want to accidentally out someone by using the wrong name in front of people who aren’t safe to be out with.

It should be up to the person to come out however they so choose, and it’s important that you respect that process.

You don’t want to accidentally make any decisions for others, especially such personal ones, so be courteous and aware of how your “helping” might not be so helpful.

This can also apply to situations where you might want to correct someone for referring to someone using an old name. It’s always a good idea to play it safe and check in with the individual whose name has changed before going around correcting others.

Don’t be afraid to ask!

Simply checking in to make sure that new name is to be used in all spaces is a respectful and positive thing to do.

Depending on what kind of relationship you have with someone whose name has changed, I would encourage you to think of ways to make them more comfortable.

For example, if you have an employee working under you who gives you a name for their interview and a different name for their background check, it could be a good idea to sit down privately with them and ask what they would prefer on their name tag.

If there is anything you can do to make their work experience better, do try!

Always make sure to check in with the individual to be sure what you have in mind is an acceptable way of handling their name change.

I knew someone whose boss hid their timecard from other employees as to prevent the accidental outing of their trans status.

If you’re a teacher or professor and receive an e-mail from a student asking that the name on your roster not be used to refer to them, acquiesce! Do your best to keep track of that student and mind their pronouns as well.

Personally, I’ve had my birth name read out to an entire auditorium of students, and it was absolutely horrifying. I make a point of sending out e-mails to professors at the beginning of the school year so that mistake doesn’t happen again.

Remember when calling out names for roll, handing back papers, or sending around a sign in sheet, you don’t want to share personal information on accident.

You might make mistakes, but don’t let that scare you from making the change as smooth as possible. Just apologize and get the name right the next time.

Sometimes all a person needs is another human being who is respectful enough to honor the name they have chosen to go by.

A version of this post was previously published on everydayfeminism.com and is republished here with permission from the author.