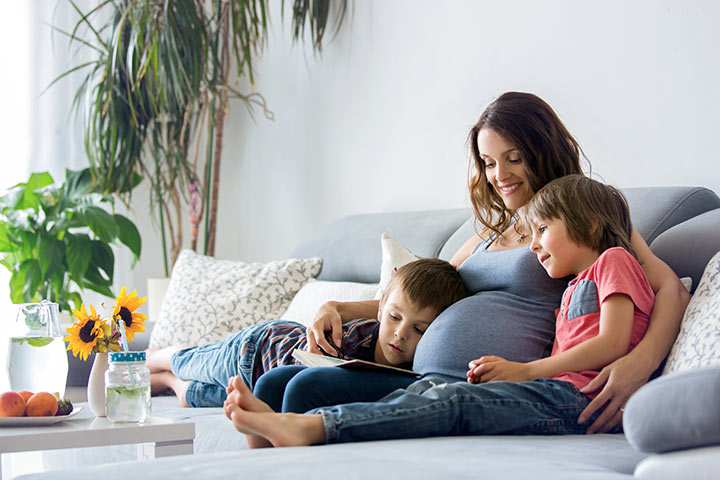 We often view pregnancy from an adult’s point of view. But as a kid, we sure would have looked at it quite differently. Just like everything else, we would have been curious about it. Our elders giving weird responses to our queries to convince us would have further fueled our imagination. We asked some of our readers what their perspective was about pregnancy, as a kid. The responses we got were quite interesting and hilarious too. Here, we share some of the best of them:

“Whenever I asked my mom how I came, she always used to tell me that she simply pushed her belly button in and out I popped from her belly!” Shanaya

2. Got From The Hospital

3. The Stork Dropped In

“My mom’s reply was always the same each time we siblings asked her where we came from. She said that there was a family stork that delivered us as a package every 3 years. We are 3 siblings, 3 years apart in age.” Ivana

4. Sneezing Out The Baby

“I don’t know how but my mom had easily convinced me that all she needed to do was sneeze and the baby would come out of her nose. After 2 lovely kids, I know it takes more than that to have babies.” Mahira

“I know it sounds silly. But I had seen a movie where the girl refuses to kiss her boyfriend because she believes it’ll lead to babies. And guess what? I believed in it too!” Himani

“When my mom was in the last phase of her pregnancy, she once made me feel the baby move. I was shocked and ran crying to my dad. He asked me what the matter was. Between sobs, I told him mom ate the baby which was now in her stomach. To this day, it’s a running joke in my family!” Mehul

“I was often curious about Dad’s role in making babies, much to the embarrassment of my parents. So, one fine day, Dad told me how he had trekked a hill, reached the summit, and asked God for a boon. That’s how I was granted as a wish. I had some serious new-found respect for him after that!” Abeer

“As my mom started putting on some pregnancy weight along with a preggo belly, I got concerned to the point where I had once asked her to stop eating right in the middle of her meal. I had noticed her belly move and was scared she was going to burst. Legit.” Ahana

“When I asked my parents why they love me so much, they used to tell me that I was the prettiest baby on display at the showroom. According to them, I cost them quite a hefty amount.” Naira

“This sounds straight out of Bollywood movie dialogue. I don’t resemble my elder sister much. And she easily took advantage of it by telling me that she found me lost in a mela (fair) and requested our parents to keep me. For years, she made me believe that I owed it to her.” Kuhu

“When my mom told me that I had lived in her stomach, I asked her how I came out. She said I came out with her poop. Yuck! I never asked her that question again until the day I came to know the reality and confronted her about it. We both had a good laugh over it.” Sara

Isn’t it hilarious how people viewed pregnancy as a kid? Or rather, they were convinced about it by adults? What was your point of view about pregnancy? Share your experiences with us in the comments section below.